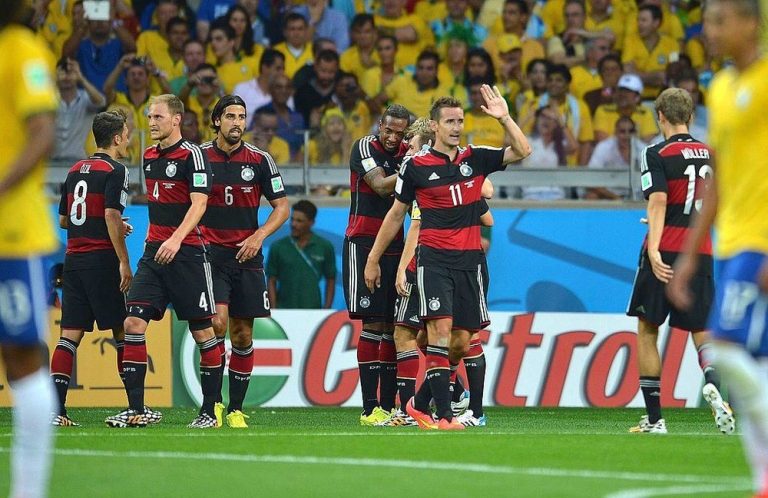 There is an indeterminable space in sports that’s almost impossible to reach. It’s a point where circumstance, coincidence and skill intersect, where a team reaches a collective state of consciousness and seem to move as one to a higher plane of sporting performance. Inside this space, the miraculous can occur and astounding feats of heroism can take place.

Or to put it more succinctly, sometimes unexpected sh*t happens.

The World Cup has seen its fair share of indeterminable space invading and unexpected sporting excretion (no, this isn’t about you Mr. Lineker) throughout its chequered history. Let’s take a more in-depth look at some of those moments.

Picture the scene: Fresh from their opening 2-0 victory over Chile, World Cup favourites England are readying themselves for what should be their most routine match of the Group. At the Estádio Independência in Belo Horizonte, football nobodies the United States of America are expected to be lambs to the slaughter.

The USA have a team made up of part-timers, mailmen and school teachers. Walter Winterbottom’s England squad is laced with legends – Billy Wright, Alf Ramsey, Stan Mortensen, Jackie Milburn, Stanley Matthews and Tom Finney are among their number.

Alongside the chance to seal their passage to the next round of the World Cup, England want to show those “Yanks” what “real” football is. It’s not that silly version they play in the States with shoulder pads, cleats and all that hut-hutting. “Let’s teach them a lesson for chucking all that lovely tea into the harbour at Boston. Do it for the tea lads.”

Just a little over ten thousand people turned up to watch the game, though they are now considered the privileged few. England couldn’t find a way past goalkeeper Frank Borghi in the early stages and then the unthinkable happened. Haitian born striker, Joe Gaetjens, of New York club Brookhatten, diverted a long-range Walter Bahr effort past English goalkeeper Bert Williams in the 38th minute.

England were shell-shocked and they carried that bewilderment back out with them for the second half. The expected English barrage didn’t come, in fact the USA created more clear-cut opportunities to score in the second half. When the final whistle blew, the Estádio Independência erupted, sending an avalanche of noise sweeping down from the stands. USA won 1-0 and the wet tea went unavenged.

The fall-out from the result in England was understandably huge and the embarrassment felt deeply, though in the USA, nobody batted an eyelid.

“The only person who met me at the airport when we flew [back] was my wife,” Walter Bahr, a defender who set up the winner told CNN. “The papers had nothing in there. The Philadelphia paper, I still have a copy of it, it has a two-inch column. I don’t think I did a single interview about the World Cup until 25 years later.”

Both England and the USA lost their next Group games against Spain and Chile respectively, meaning both nations were eliminated from the competition.

Watching football can quite often feel surreal. On the 8th of July 2014, 58,000 spectators at the Estádio Mineirão, Belo Horizonte must have been pinched pink – compelled to check and re-check that they weren’t dreaming…..or having the deathliest of nightmares.

Brazil were just one game away from reaching the Final of a tournament they were hosting for the first time since 1950. They were beaten to the trophy by Uruguay back then and they were determined to go one better this time around. Their team was weakened by the absence of Thiago Silva and Neymar, though with the boost of home-advantage the Brazilian’s confidence remained high.

The contest against the Germans started slowly enough and even though Die Mannschaft took an 11th minute lead through Toni Kroos, Brazil were still in the game. But at the 23rd minute all hell broke loose. Miroslav Klose doubled the German’s lead, but Brazil’s responded senselessly. The Brazilians over-extending search for an instant reply to Germany’s second goal was less gung-ho and more tactical suicide.

Germany were ruthless in exploiting the wide-open spaces left in the Canarinho rear-guard. They were 5-0 up inside half an hour. With each successive ripple of the Brazilian net, the wailing intensified in the stands as the crowd witnessed the live torture of eleven of their compatriots.

By the time Oscar had rolled in a consolation goal on 90 minutes, the Germans had plundered seven at the other end. They had taken their foot off the pedal in the second half, though their pity only made the situation worse.

The game was the biggest winning margin in a World Cup Semi or Final. It was Brazil’s worst defeat since 1920. The game also saw the fastest cluster of four goals scored in World Cup history (23’ to 29’). Germany’s seven goals also took them past Brazil as the all-time highest goal-scoring team in FIFA World Cup history. Before the match Brazil and Germany were even having reached seven World Cup finals each, the German’s victory in Belo Horizonte made them the only squad to reach 8 finals.

World and European Champions France had every reason to expect more success at the 2002 World Cup in 2002. The crux of their squad were yet to hit that point of rapid physical depreciation and Zinedine Zidane (29), Thierry Henry (24), Lilian Thuram (30), Patrick Vieira (25) and Fabien Barthez (30) et al, were still showing their class at club level.

France opened the tournament with a fixture against African side Senegal – a nation with little international pedigree that was playing in a World Cup Finals for the very first time. Of course, the match had an extra significance given the countries’ tense historical relationship and controversial colonial heritage and you could sense that in the build-up.

Everywhere you looked there were links, talking points and sub-plots. Midfielder Patrick Vieira was born in the Senegalese capital Dakar before his family moved to France when he was just eight years old and all but two members of the squad that Senegal took to the Far East played their club football inside French borders.

Senegal took advantage of the blindingly apparent French underestimation to battle their way to a 1-0 win in Seoul thanks to a scrappy first half goal from Pap Bouba Diop. After the match, Patrick Vieira said:

“The opening game against Senegal was a disaster. That just goes to show you that quality alone is not enough. You have to work and keep your feet on the ground.”

France were unable to recover from the psychological blow dealt to them by Senegal and after drawing against Uruguay in game two, the world champions were turned over 2-0 by Denmark in game three. The result against the Danes sent France crashing out of the tournament having not scored a single goal. Senegal made it to the Quarter Finals where they were eliminated by Turkey.

Dubbed the “Mystery Men” by the English press at the time, the North Korean squad arrived for the 1966 World Cup as a completely unknown quantity. The team travelled west from behind the secretive North Korean veil, though they were almost refused entry to England after the authorities almost refused their international visas.

At the time, due to heightened political tensions, the English government didn’t recognize North Korea as an independent state. They eventually allowed their team entry however, which allowed the “Mystery Men” to compete.

In their first Group game, they were beaten 3-0 by fellow Stalinist led nation the Soviet Union. In game two they managed to steal a 1-1 draw against Chile, thanks to an equalizer two minutes from time by Pak Seung-Jin.

Their first two results meant that North Korea would need a win against two-time world champions Italy to have any chance of progression. The Italians were considered one of the tournament’s strongest outfits, with legendary figures like Gianni Rivera, Giacinto Facchetti and Sandro Mazzola among their key players.

Remarkably, North Korea got the victory they needed, squeezing past the Italians aided by a first half Pak Doo-ik strike. Subsequently, they became the first Asian team to reach the Quarter Finals of a World Cup.

The North Koreans threw away a three-goal lead in the Quarters against Portugal to eventually lose 5-3, though they returned home to a hero’s welcome. The Italians weren’t so lucky. Their early exit saw their players pelted with rotten fruit when they returned to their homeland.

The opening fixture of Group B at the 1990 World Cup in Italy, pit reining champions Argentina against Cameroon, who were competing in just their second ever World Cup tournament. The holders viewed the game as an opportunity to throw down an early marker for the rest of the competition. It was a chance for Diego Maradona and co to prove that their grip on the trophy was tight.

Cameroon hadn’t read the script however and the Africans combined their skill with a hefty dollop of aggression to smash their way to a 1-0 win. Cameroon had been reduced to ten men on 61 minutes after André Kana-Biyik was given his marching orders, but just six minutes later François Omam-Biyik rose high to head home past Nery Pumpido.

Pumpido might have done better with the header, though the Cameroon players didn’t care as they celebrated wildly on the pitch and the bench. Benjamin Massing became the second Cameroon player to be sent off in the 89th minute when he kicked Claudio Caniggia so hard that he lost a boot.

Cameroon held on to win, a victory that helped them escape the Group and make the knock-out stages. England eventually eliminated the Africans in the Quarter Finals, though they needed an extra time Gary Lineker penalty to do it. Argentina shook off their embarrassing defeat and made it all the way to the Final of the World Cup, where they lost 1-0 to West Germany.

Read more: World Cup 2018: Leaving the past in the past; Argentina’s final curse