5 things Gus Hiddink can do to turn Chelsea around 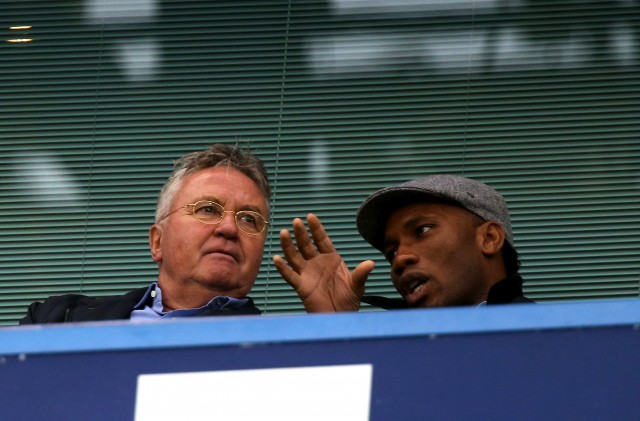 The implosion has been cataclysmic, an astonishing dismantling of an empire that felt indestructible just six months ago; from FA investigations, to player revolts, to a remarkable collapse on the field, the speed of Mourinho’s demise is scarcely believable.

The assertion that he was “betrayed” by players last Saturday felt significant at the time, and indeed the image of an exhausted – perhaps defeated – Mourinho admitting that his players had ignored his instructions will be remembered as the defining symbol of his downfall. Performances were not improving and, as Chelsea’s technical director Michael Emenalo confirmed, there was “a palpable discord between [the] manager and players”.

With Chelsea 14 points off fourth and one point outside the relegation zone, their new manager has an extraordinary task. In 2009, Guus Hiddink’s regenerative effect was immediate; Chelsea won their first four matches, comfortably secured third place in the league, and were just minutes away from beating Barcelona in the Champions League semi-final. Then there’s the small matter of winning the FA Cup, Chelsea’s first trophy in two years. The squad in 2015 is arguably no weaker than the one inherited by Hiddink from Felipe Scolari, but confidence is significantly more damaged.

Here are five things he could do to help turn the club’s fortunes around.

The final days of Mourinho’s dynasty are shrouded by conflicting reports more interested in sensationalism than accurately reflecting the mood. Publically, we have seen Diego Costa and Eden Hazard flounce and huff on the Chelsea side-lines, and it seems unlikely that either event was as small as the club made it out to be. Add to this Mourinho’s failure to give first-team opportunities to many of the club’s youngsters, his public accusations against individuals, and the dropping of Cesc Fabregas, Nemanja Matic, and John Terry to the bench, and it is easy to imagine that a fresh manager will instantly raise morale.

Reigniting the passion is the easy bit. Raising confidence and grinding out results will be a much sterner task. Chelsea have a 22 man squad, and six of these have started three or fewer Premier League matches this season. Loic Remy has suffered criticism for his performances, but poor form is to be expected from a player yet to start consecutive matches – particularly when he has been overlooked despite the injuries and poor form of his team-mates. Remy’s penetrative style and constant movement off the ball will be useful in re-energising Chelsea’s static-looking front three. He completes more dribbles (4.8) and shots (5.5) per 90 minutes than Diego Costa (3.7 and 2.0).

Baba Rahman is another fringe player that could do with a run in the first team, despite struggling in his handful of appearances under Mourinho. Rahman has only had 246 Premier League minutes, but already he averages more tackles per 90 (6.2) than any other Chelsea player bar Ramires (6.7); the 21-year-old may be a bit rusty, but he deserves a chance to prove he can be more consistent than the hapless Branislav Ivanovic – whilst freeing up Cesar Azpilicueta to play on his more natural right side.

Chelsea are the reigning champions of both the UEFA Youth league and FA Youth Cup, and yet Ruben Loftus-Cheek is the only academy product to have cemented a place in the squad since Mourinho’s arrival in 2013. Hiddink is unlikely to bring any new players through (33 of them are out on loan) but he can at least trust in the three teenagers currently warming the bench: Loftus-Cheek, Kenedy, and Bertrand Traore.

The fearlessness of youth is a useful tool in re-energising a squad’s depleted morale, whilst the optimism and physical speed of youngsters can jolt complacent senior players into action. Kenedy’s inventiveness from the left wing would challenge the authority of a tiring Eden Hazard, and potentially offer an element of unpredictability to an attack that looked increasingly static under Mourinho. Kenedy has so far only featured in central attacking midfield and – bizarrely – left-back for Chelsea; a stint in his favoured position and an arm around the shoulder could kick-start his Chelsea career.

Loftus-Cheek looked superb in his three Premier League games last season, and yet has barely featured in 2015/16 despite possessing the precise attributes – positional discipline, excellent passing range, and defensive clout – that Chelsea have been lacking in central midfield. Traore has only featured for seven minutes, but the Chelsea hierarchy think highly of a youngster who scored 14 goals on loan at Vitesse last season.

Guus Hiddink was schooled in the Total Football philosophy of the 1970s, and indeed fluid transitions between attack and defence are at the heart of his tactical philosophy. He will most likely play in a 4-3-3 that utilises three box-to-box central midfielders and inverted wingers; Hiddink will expect his midfielders to take part in more phases of play than Mourinho, meaning that the likes of Fabregas and Hazard will have to work harder for the team.

Expect Willian – industrious and intelligent – to feature heavily, with Fabregas most often used as the most advanced of a midfield three. Frank Lampard starred in this role under Hiddink in 2009, and Fabregas’s floating role in the half-spaces is similarly suited to the Dutchman’s style of play.

Hiddink’s model of attacking, proactive football will be greeted warmly by the players. Mourinho’s reactive approach seems to have drained self-belief at Stamford Bridge, and greater creative freedom for Pedro, Oscar, and Kenedy will most likely yield positive results. With the FA Cup yet to start and a simple Champions League tie around the corner, it is worth backing Chelsea to win a trophy at 4/1 with SkyBet.

5) Make some signings in January

“When you want to compete, you have to renew your squad almost every year. To be realistic in the upcoming years we have players who are aging. It’s my humble advice to bring in even more depth.” These were the departing words of Guus Hiddink in May 2009. It is unlikely his thoughts are much different today.

Predicting Chelsea’s January transfer activity is virtually impossible, but one thing we do know is that Roman Abramovich is not shy to act midseason. Chelsea have signed 12 players since the winter window began in 2003, including Mohamed Salah, Fernando Torres, Kevin de Bruyne, David Luiz, Juan Cuadrado, Branislav Ivanovic, and Nemanja Matic.

Their priorities are a box-to-box central midfielder, a central defender, and a striker – although a right-back and a winger would also be ideal. It is unlikely that more than one or two of these positions will be filled, but Hiddink will be keen to push ahead with key targets. Chelsea are expected to submit another bid for John Stones, and rumours of Alex Teixeira  joining the club are getting stronger. We’ll have Premier League betting tips for every game for the rest of the season so don’t miss out!

The rest is more hazy, but links with Antoine Griezmann and Marco Verratti are particularly exciting (Chelsea desperately need a central orchestrator that can sew the lines together) whilst a move for Seamus Coleman would certainly be worthwhile. Talk of Jamie Vardy or Graziano Pelle joining the club seem far-fetched, and with few top players available, signing a striker in January seems unlikely.

With one or two new additions, Chelsea can begin to climb back up the table; it is a long shot, but it might be worth putting a small wager on Chelsea to finish in in the top six at 11/4 with Ladbrokes.

Other Chelsea and Mourinho bets:

Chelsea manager for the first league game of 2016/17 (with SkyBet): Hiddink had “many second thoughts, sometimes third thoughts” when leaving Chelsea in the summer of 2009, so he may choose to stay on if results are positive. However, he is only the third favourite at 2/1. Diego Simeone and Pep Guardiola are joint favourites at 15/8, reflecting the enigma of Abramovich’s thought process. These are two entirely contradictory managers; Simeone has the feisty, under-dog mentality of Mourinho, whilst Guardiola is the Special One’s antithesis.

Mourinho’s next post (with SkyBet): Mourinho is the new favourite to success Louis van Gaal as Man United manager at 1/1. He wanted the post after Alex Ferguson’s departure in 2013, but was overlooked because of his temperament and short-term model; the fiasco at Chelsea this season makes these odds very unappealing. SkyBet are offering 3/1 on a return to Real Madrid, where his nemesis Rafa Benitez is struggling, but Mourinho’s acrimonious departure from Madrid probably rules him out. The best betting odds are 7/2 for the PSG job, a position that would suit both parties: Mourinho could break a record by winning the league in a fifth different country, and PSG could finally have a decent crack at winning the Champions League. Chelsea face PSG in the knock out stages of the Champions League so could Mourinho be in the dug out at PSG for the encounter. Head over to our Champions League betting tips homepage for coverage of every knockout tie which will commence on 23rd February.