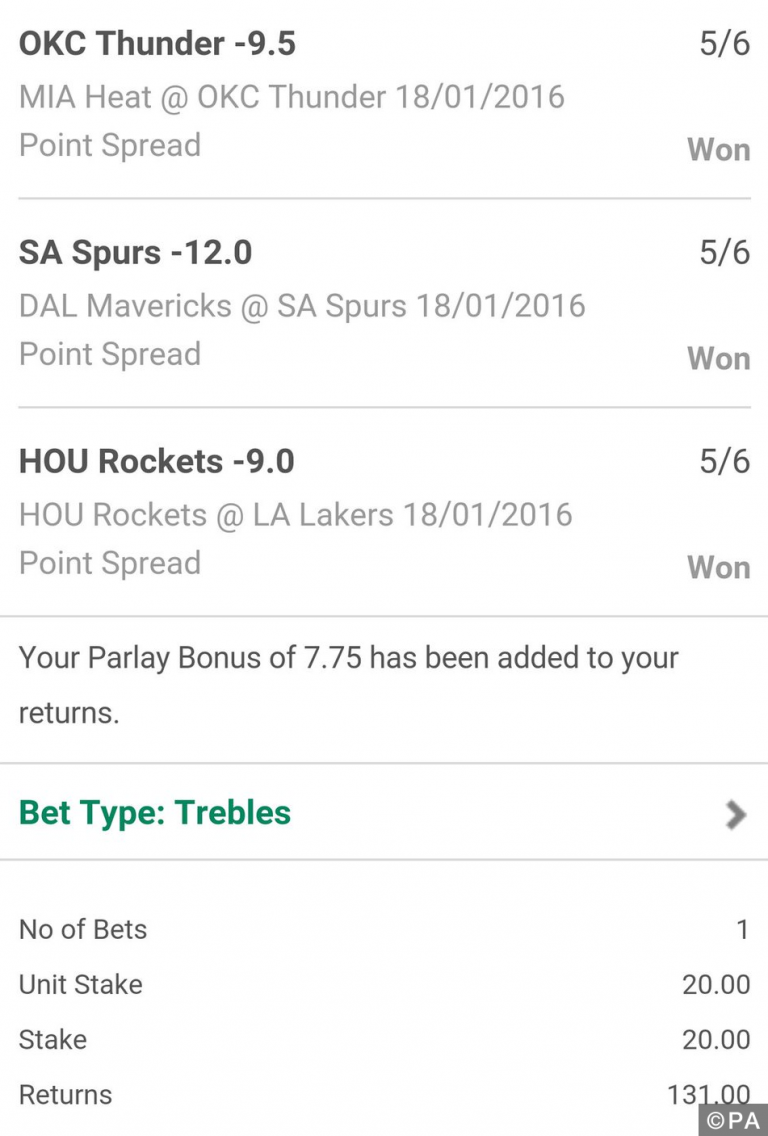 Another good week for our NBA tipsters with a 5/1 accumulator and daily double on Monday night and the week was capped off on Sunday night with a 6/1 treble winner.

As always it was a quiet night in the NBA on Sunday with just 5 games being played. Our tipsters only felt confident enough to post a 6/1 treble but our followers were very pleased with the results. The first leg was live on BT Sport as the Oklahoma City Thunder faced the Miami Heat on home court. The Heat were struck by injuries and it showed as they only put up 74 points and lost the game 99-74 which landed our OKC -9 point spread bet easily. Our second leg was in the battle of Texas as the Dallas Mavericks faced the red hot San Antonio Spurs. After a slow first quarter the Spurs recorded a 112-83 blowout which landed our -12 point spread bet easily again and the Spurs rolled on. Our final leg tipped off at 2.30am as the Houston Rockets travelled to Kobe Bryant’s LA Lakers. A dominant third quarter from James Harden and the rockets secured this leg where they outscored the Lakers 34-18. Our -9 point spread landed with a 112-95 Rockets road victory and we scooped £60 profit from £10 advised stakes.

It’s Martin Luther King Day which means there’s 10 games total and 4 are being shown live on BT Sport from 6pm. We will have tips for all games on BT Sport and accumulators which include a money line monster acca! Click to view today’s NBA predictions!

Check out some of the winning bet slips sent in on Twitter. This came on the same day we won our £10 to £1,000 challenge so it was a popular winner!

@FootySuperTips nice early morning boom to wake up to! Thanks guys pic.twitter.com/GAigWZgKj2

The treble qualified for the bet365 parlay bonus which added an extra 5% to our winnings, every little helps! Make sure you bet today’s NBA tips with bet365, new customers claim a £200 deposit bonus here.