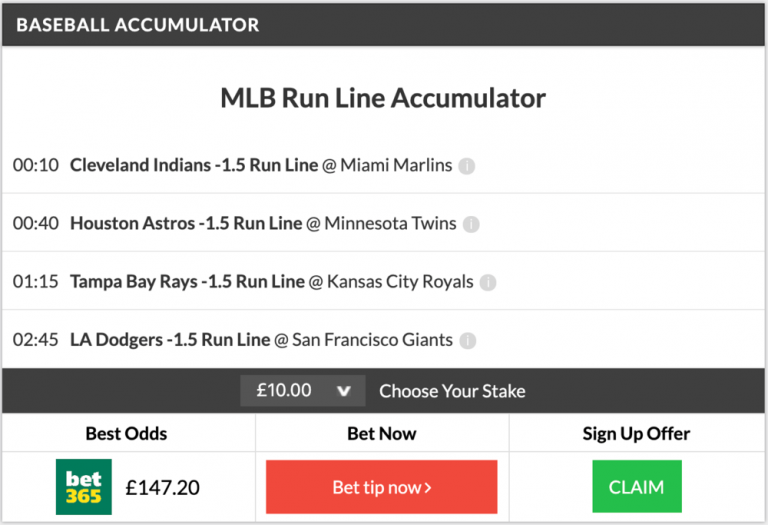 A great ending to the month of April here at FST as our analysts have delivered yet another Accumulator winner!

Originally priced at 13/1, our Baseball Accumulator came in at around 8/1 odds, as the Tampa Bay Rays game was postponed due to poor weather and voided as a result.

*Tampa Bay Rays leg was void as the game was postponed!

First it was the Cleveland Indians who handed the Miami Marlins their 4th straight defeat and 21st of the season in 29 games. Cleveland won fairly easy here, despite going down 3-2 after the first two innings. In the 3rd they got hot and went up 6-3 and never looked back. In the end it finished 7-4 in favour of the Indians to land our first bet on the acca.

The Houston Astros dominated the Minnesota Twins 11-0 for our 2nd tip winner on the Acca. It was a fairly quiet first 5 innings in this one as they only led by 3-0. After that they had two 4-0 innings (6th and 8th) to win this one convincingly. The win keeps them top of the American League West standings.

And finally it was the LA Dodgers who crushed the San Francisco Giants away from home. The 6th inning was the decisive one here as the Dodgers decided that one 6-2 in their favour after which they scored one more run for a final score of 10-3 here. The two division rivals have already played each other 5 times this season and currently it’s 3-2 Dodgers.

Make sure you have bookmarked our Free Baseball Tips page on the FST website. The season is very long and you don’t want to miss out on future Acca winners!