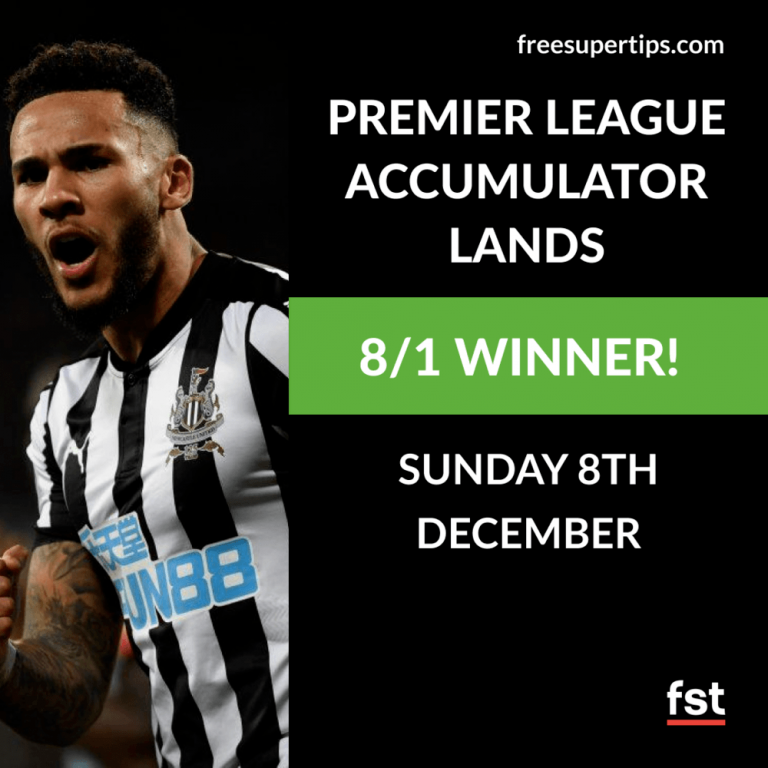 Here’s how our latest winner went down:

OUR 6TH FOOTBALL ACCUMULATOR WINNER THIS PAST WEEK!!

All four of the legs from our Premier League Accumulator were Both Teams to Score, in each of Aston Villa v Leicester City, Newcastle v Southampton, Norwich v Sheffield United and Brighton v Wolves. The first goal of our accumulator came from none other than Jamie Vardy, as he gave Leicester the lead after 20 minutes taking advantage of Tyrone Mings struggling with a hamstring problem. Kelechi Iheanacho made it 2-0 to the visitors just 4 minutes before the break, but Villa managed to pull one back just before half time through a Jack Grealish strike, landing the first leg of our accumulator. A Jonny Evans header and Jamie Vardy strike rounded of a comfortable 4-1 win for the Foxes.

Over at Carrow Road, the hosts Norwich took the lead through Alex Tettey on 27 minutes. They went into the break ahead, but they couldn’t hold on to their lead for long as Enda Stevens levelled the scoring 4 minutes after the break. Just 3 minutes later another Sheffield defender got in on the act, as George Baldock completed the turnaround to give the Blades the lead. The game ended 2-1 to the visitors, and we were on to leg 3.

The final game of the 2pm kickoffs and the penultimate leg of the accumulator was the clash at St James Park between Newcastle and Southampton. It wasn’t the best of first halfs as neither side found the back of the net, but shortly after the break on 52 minutes, Saints’ goal machine Danny Ings popped up with his 8th goal in 10 games to give the away side the lead. That lead didn’t last too long though, as Jonjo Shelvey levelled the scoring 20 minutes from time. It looked like the game would end 1-1, but on 87 minutes, Federico Fernandez reacted first to a spilled save by McCarthy to give the Magpies another 3 points.

The final leg of the accumulator came from the late kick off, as Brighton took on high-flying Wolves at the AMEX. Wolves got off to a great start as Diogo Jota made Brighton pay for some sloppy defending just before the half hour mark. That lead lasted just 6 minutes though as Neal Maupay lashed home first time from an over the top through ball from Dale Stephens. 2 minutes later Brighton compounded Wolves’ misery through Davy Propper as he thumped home a header. Just before the break though some more sloppy defending from Brighton and a great interception from Jonny saw him slip in Diogo Hota for his second of the match, sending the sides into the break level at 2-2. There were no more goals in the game, and our 8/1 Premier League Accumulator landed!

Be sure to bookmark our Free Football Tips page for predictions on all 2019/20 Premier League games and much much more!