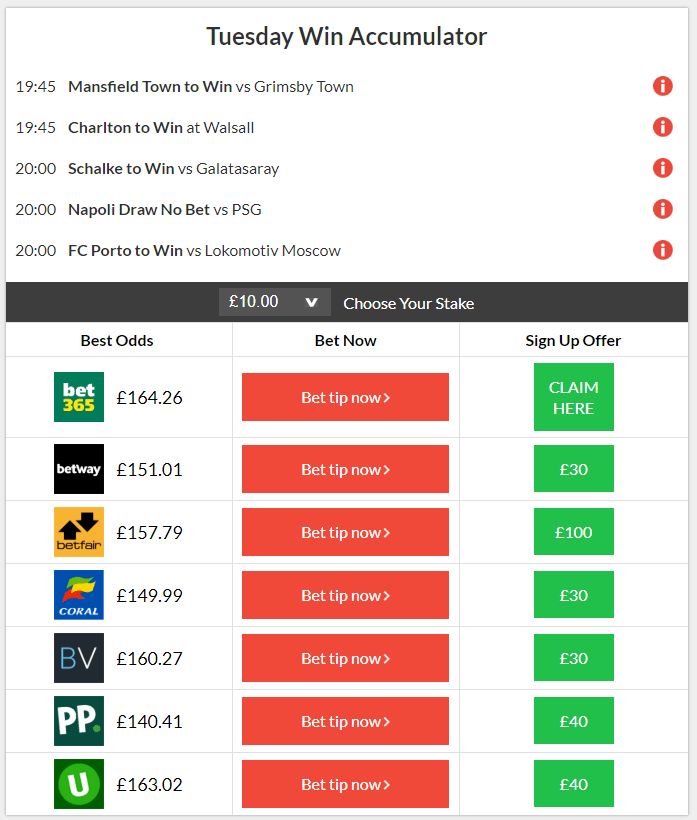 What a start to November we are having at FST! After landing a 15/1 Win Accumulator and 9/1 BTTS Accumulator last week. Tuesday’s win accumulator landed at reduced odds of 8/1 (due to Napoli’s draw no bet void leg vs PSG) to make it 3 winners in 6 days!

Here’s how our 8/1 winner went down tonight!

Weekdays are always exciting when the Champions League is featured and Tuesday produced the excitement we expected. With such big games on our analysts took full advantage of those, using 3 fixtures from the competition in our acca.

If you’re having a bet today make sure you follow today’s win accumulator tips and we have Champions League tips for every game.

The first two fixtures featured in our accumulator came from the English Football League where Charlton traveled to Walsall in League 1 and Mansfield hosted Grimsby Town in League 2. The analysts here at FST needed a Mansfield & Charlton win and it was no easy 90 minutes trying to get those results! Charlton got off to a great start with a goal in the 6th minute and managed to hold onto that going into half time. After the half time break they came out with a spring in their stepping knowing they needed a goal to seal the victory away from home and in the 56th minute they got that before holding out the game to successfully win 2-0. However, Mansfield’s task wasn’t quite as easy! Despite dominating the first half they saw themselves trailing at the half time market to Grimsby’s only shot on goal – as they entered the second half we knew a big performance was needed to get a victory here. They responded exactly as expected with a goal in the 50th minute through Walker, with the clock ticking and 10 minutes left we started to lose faith here at FST but Walker produced the goods again with a goal in the 82nd minute to grab Wimbledon the win.

The next leg saw us needing a Schalke win as they faced off against Galatasary after their reverse fixture away in turkey that ended in a stalemate! From the first whistle Schalke showed their attacking intent against the Turkish side again grabbing a goal in the fourth minute to boost to confidence of the lads here at FST, the game lacked opportunities after that and as we entered the second half we knew a Schalke goal would see this game off. Thankfully we wasn’t waiting long for that – in the 57th minute Schalke’s striker Burgstaller grabbed himself another goal for Schalke which ultimately saw this game off and saw our third leg come in!

As we entered our fourth leg of the accumulator we hard arguably our closest game as Napoli faced off against PSG in a huge game in that group following Liverpool’s earlier defeat. The Italian’s started well but as half time beckoned PSG full back Bernat was slotted in to finish from close range to give them visitors the lead just before the break. Napoli came out searching for the equaliser and in the the 62nd minute they was given the golden opportunity after being awarded a penalty; one man that wouldn’t miss this chance was Insigne as head bet his fellow countryman Buffon to get the Italian’s level. As the game went out PSG grew into the game having more chances which had us worried but Napoli showed their quality and managed to hold on to the draw making this leg of the acca void and it going onto it’s final leg.

Finally we relied on FC Porto to get the victory against Russian side Lokomotiv Moskva and it turned out to be some performance by the Portuguese league leaders. Much like the German’s they asserted their presence in the game early scoring a goal in the 2nd minute as Herrera slotted home with their first chance of them game, their clinical nature continued with them managing a further 3 goals in the game despite only having 4 shots on target bringing our acca in with an emphatic 4-1 victory!