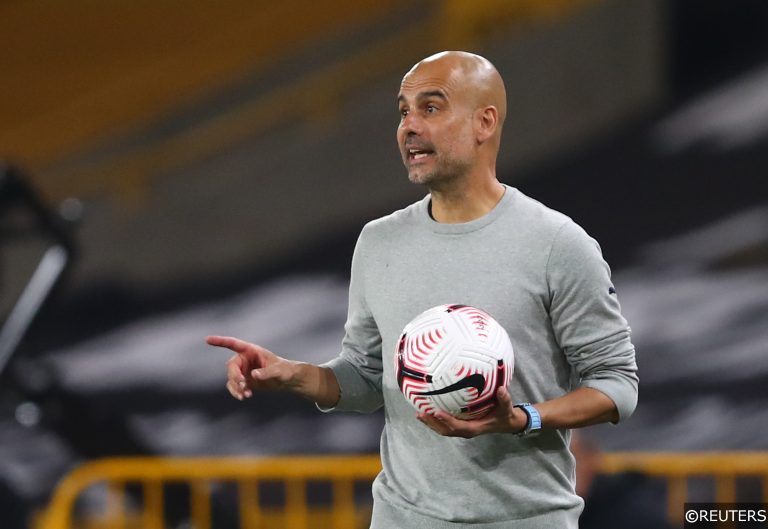 The first legs of the Champions League semi-finals take place this week and Manchester City continue their quest for a maiden victory in Europe’s premier club competition against Real Madrid on Tuesday.

Pep Guardiola’s men have home advantage in the first meeting, and using our Match Prediction we’ve put together a huge 90/1 Ultimate Bet Builder tip ahead of what promises to be a fascinating clash.  Read on to see our selections and to back our bet.

Man City to be winning at half time

Real Madrid have only lost seven games in all competitions this season but when they are beaten they tend to concede early. Los Blancos have been trailing at the break in five of their seven losses, and with City seeking to make the most of home advantage they can male a fast start and open up a first half lead.

We’re expecting City to seize the advantage by winning the first leg as they have an impressive home record in this competition. Pep Guardiola’s men are unbeaten in their last 11 home games in the Champions League and have won 10 of those, while their one draw came this season against Sporting after they had won the first leg 5-0 away from home.

Gabriel Jesus should be in line to start after his four-goal haul, and an assist, in City’s 5-1 demolition of Watford at the weekend. The Brazilian has three goals in six appearances in this competition and has scored in big games domestically too, including a strike in the 2-2 draw with Liverpool earlier this month. Jesus should be in confident mood after his heroics against the Hornets and he can add to his account against Real.

This is the biggest priced leg on this bet and an assist from Real veteran Luka Modric does appeal. The Croatian managed to set up a team-mate in both legs in the previous round against Chelsea and is averaging 1.4 key passes per-game in this competition, with a pass success rate of 90.5%, so if Los Blancos are able to grab a goal Modric is likely to be involved somehow.

Karim Benzema to have one or more shots on target

Karim Benzema is enjoying his best ever season in the Champions League with 12 goals in nine games. The evergreen Frenchman is averaging a ridiculous 2.0 shots on target per-game in Europe and 1.8 across all competitions, so back the Real striker to register at least one on goal on Tuesday.