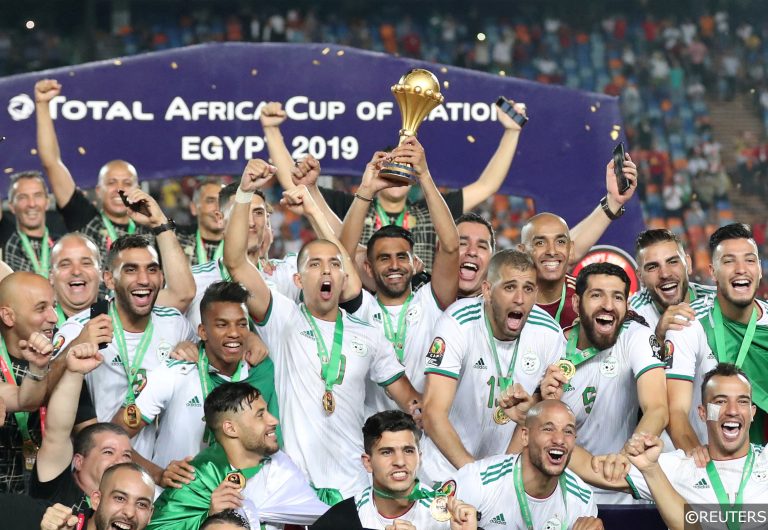 The twice-delayed 33rd African Cup of Nations is set to begin on Sunday in Cameroon and will run until the final on the 6th February as Algeria look to defend their 2019 crown.

With the entire tournament being broadcast on UK television (Sky Sports and then BBC from the quarter-finals onwards) and Premier League talent such as Mo Salah, Sadio Mane, Edouard Mendy, Kelechi Iheanacho and Riyad Mahrez on display this year’s instalment is rightly getting the attention it deserves.

We’ll be covering every single match of AFCON 2021 in depth, but to whet your appetite ahead of kick-off we’ve delved into the outright markets to give you the low down.

Despite the high profile attacking players such as Mo Salah, Sadio Mane and Riyad Mahrez that will feature in the tournament, it is often the best defences that come out on top.

Algeria are the reigning champions, as they came out on top over Senegal 1-0 in the 2019 final. The North African side conceded just twice in seven games, showing the power of a strong backline. The finalists from two years ago are fancied to go well again as the first two in the betting.

Senegal are the highest ranked side in the tournament according to FIFA, 20th, but have never won this tournament and will be looking to put that right this time around.

Aliou Cisse certainly has one of the most talented squads with Edouard Mendy in goal, Kalidou Kouibaly at the back, Idrissa Gueye in midfield and of course Sadio Mane leading the line.

The West Africans have added to their squad since that defeat in the final two years ago with Bayern Munich’s Bouna Sarr declaring for the nation recently and highly touted Tottenham youngster Pape Matar Sarr getting the call up.

Senegal are favourites for a reason and 4/1 is a fair price for them to break their AFCON duck this time around.

North African sides have reached both of the last two finals, with Egypt losing out in 2017 followed by Algeria’s victory two years later. Their close rivals Morocco come into this year’s edition with a good chance of making it three in a row.

Vahid Halihodzic’s squad were unbeaten in the calendar year of 2021 and as a result are now the second highest ranked side by FIFA in this tournament, 28th.

Defences are crucial in this competition and Morocco have conceded just once in qualification. Romain Saiss leads a side that is bristling with young talent. Youssef En-Nesyri is likely to play in the forward line, with the creative Ilias Chair and the Mmaee brothers of Ferencvaros also set to feature.

Munir El Haddadi has finally won his long battle to be able to play for Morocco after making an appearance for Spain in 2014. The former Barcelona forward is part of a considerable contingent currently turning out for Sevilla, currently second in La Liga.

The Atlas Lions have won this tournament once, in 1978, but have a squad that looks set for a deep run even without Hakim Ziyech. They hold some appeal at 9/1.

Odion Ighalo’s five goal haul saw him take home the AFCON golden boot in 2019 but just three scores was enough to secure the crown in the previous two editions.

Mo Salah dominates the market as a 4/1 shot but may be worth taking on given Egypt aren’t in the greatest form and face a tough task in beating Nigeria to top Group D and if finishing second would likely draw Algeria or Ivory Coast in the quarter final.

Behind Salah arguably the most in form player at the tournament is 12/1 shot Sebastien Haller. The striker made his debut for the Ivorians in 2020 but has notched three goals in six games so far, including two in a crucial World Cup qualifier with Cameroon.

For Ajax this year Haller has been a phenomenon, netting 22 times in 24 games in all competitions. With the likes of Nicolas Pepe and Wilf Zaha supplying the frontman, he is certainly of interest to top the scoring lists.

5 potential giant killings in the FA Cup Third Round with 169/1 acca!

29/1 NBA accumulator among the winners on Tuesday!