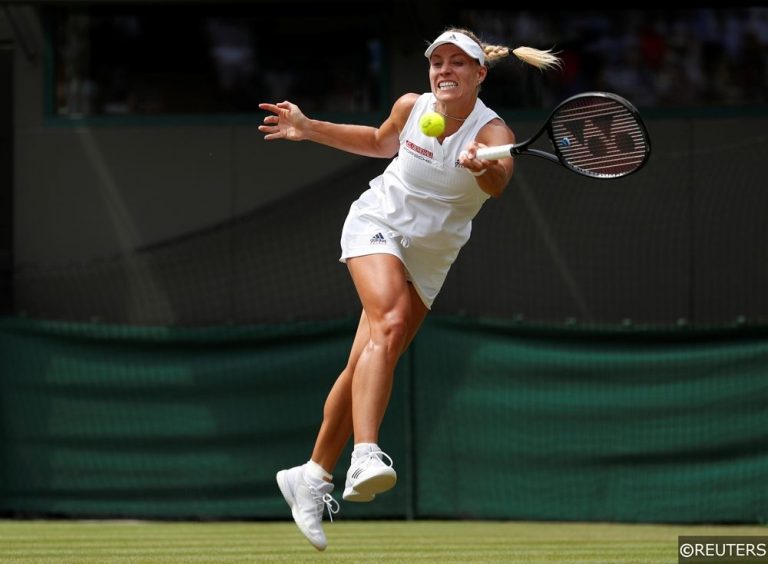 Angelique Kerber became Wimbledon champion for the first time on Saturday July 14th, as the German ace beat the greatest of them all Serena Williams in the final. It’s been a tough path back to the big time for Kerber, after a disastrous 2017 that saw her drop out of the world’s top ten. The German dominated much of the 2016 season, and she ended that season as the Australian Open and US Open champion, an Olympic medallist and the world number one. However, the pressure of the expectations that she now faced proved to be too much for Kerber, and she failed to advance past the fourth round of any of the grand slam tournaments in 2017. It will have been a big learning curve for Kerber, but it looks as though she’s come back the better for it.

The German ace was our each way tip for the title this year, and we’re now going to go through exactly how she managed to win the third grand slam title of her career, starting with her fantastic start to this season.

The now three-time grand slam champion started this season off in fine form and claimed her first title of the year by winning the Sydney International in January. The German took that form with her into the season’s opening grand slam event at the Australian Open, where she enjoyed a run to the semi-finals. This was the first indication that Kerber was becoming a threat at the big events once again. Kerber continued her fine form thereafter, as she reached a string of quarter-finals and semi-finals in the build-up to the French Open. The clay court event has historically been Kerber’s weakest grand slam tournament over the years, but she maintained her great start to the season by reaching the quarter-finals in Paris for only the second time in her career. This will have given Kerber plenty of confidence as she moved into the grass court season, and she duly delivered.

Kerber’s grass court season didn’t get off to a fantastic start, and for the first time this season the German lost her opening match at a tournament, as she was beaten by Alison Riske at the Mallorca Open. However, it would prove to be only a blip as next up was her final warm-up event prior to Wimbledon, the Eastbourne International. The thirty-year-old beat a string of difficult opponents on her way to the semi-finals, as she set-up a blockbuster semi-final with the Australian Open champion Caroline Wozniacki. It proved to be an epic encounter but, despite taking the opening set, Kerber lost the match in three-sets, and Wozniacki would go onto win the title. Despite this, Kerber was looking back to close to her best and she went into Wimbledon with a renewed confidence that she could once again win the big titles.

Angelique Kerber got her Wimbledon campaign off to a solid start with a straight-sets win over Vera Zvonareva. Zvonareva could have been a potential banana skin for Kerber, as the Russian was a Wimbledon finalist in 2010, but the German managed to battle through it and record her first straight-sets win of the tournament. American Claire Liu made things more difficult for Kerber in the next round, as she took the opening set off the German. This left Kerber with a lot to think about, and she came up with the right answers as she battled back to come through the match in three-sets and keep her Wimbledon dreams alive.

The third round threw up an extremely tricky tie for Kerber in the form of the Indian Wells champion Naomi Osaka. The young Japanese ace could have been a real threat to Kerber, but the German smothered her from the get-go and ran out a comfortable straight-sets winner. Kerber was now into the Wimbledon fourth round, the round in which she was beaten at these Championships twelve months ago. This time Belinda Bencic was her opponent, and she was an opponent Kerber had struggled against in the past. The German had a poor 1-3 record against Bencic heading into their match, but she didn’t let their past meetings play a part as she once again ran out a straight-sets winner at this year’s Wimbledon.

Angelique Kerber was now into the latter stages of the tournament as she moved into the quarter-final stage. Kerber also became the only woman this year to have reached at least the quarter-finals at all three grand slam events to date, an impressive record for the German. Russian Daria Kasatkina was Kerber’s quarter-final opponent and, much like her previous opponents, she could have been a tricky opponent for Kerber, but the German was now playing some of her very best tennis as she once again recorded a straight-sets victory at this year’s Wimbledon. This left Kerber in the semi-finals, where she would face Jelena Ostapenko for a place in the 2018 Wimbledon final. Jelena Ostapenko was the 2017 French Open champion, and a serious threat to Kerber’s final hopes. It didn’t play out that way, however, as Kerber once again proved to be far too good for the player on the other side of the net. The German once again won in straight-sets to reach the 2018 Wimbledon final, and that win meant our tip had already partly landed whatever the outcome in the final would be!

Angelique Kerber’s Route to the Final

Angelique Kerber was now into the second Wimbledon final of her career, and it would turn out to be a repeat of her 2016 final. In 2016, Kerber faced arguably the greatest female tennis player of all time, Serena Williams, in the final. On that occasion Williams proved to be too good and she ran out the straight-sets winner. However, this year looked to be different. Serena Williams was coming into this final having played very little tennis in a year, after only returning from her absence from the tour in March. Kerber, meanwhile, had only dropped one set en route to the final and she’d been playing the best tennis she had done in some time. However, 23-time grand slam champion Serena Williams was still her opponent and it would still be a big task for Kerber.

Angelique Kerber managed to rise to the occasion and she made it seem extremely simple, as she exacted revenge against Serena for 2016, as she ran out the victor in straight-sets. Kerber took the match to Serena right from the off, breaking the great American’s serve in her opening service game. Kerber didn’t really look back from there, as she went onto become the 2018 Wimbledon champion, courtesy of a 6-3 6-3 win. Kerber had become a three-time grand slam champion and our each way tip for the title had landed, a fantastic result for us!

Kerber’s win meant it was the second successive year that our each way tip for the women’s Wimbledon Championships had won the title, following Garbine Muguruza’s success from a year ago. Angelique Kerber had been the best player throughout the tournament this year and she managed to walk away with the title at the end of it, bringing a close to a terrific Wimbledon campaign for the German.