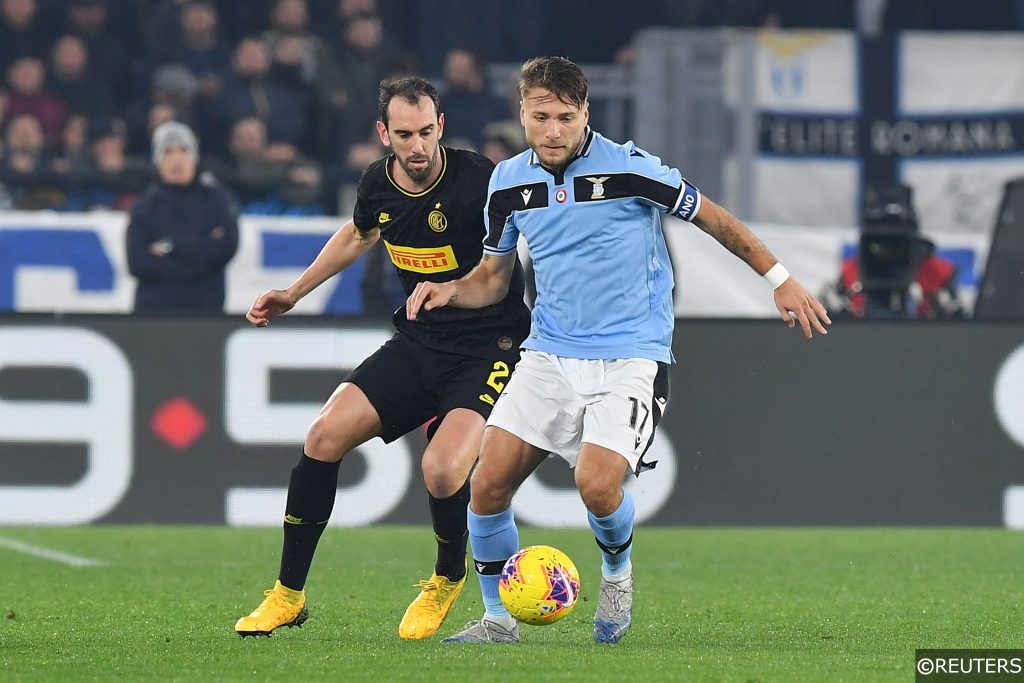 The Anytime Goalscorer market is routinely among the most popular offered by bookmakers – and it’s really as simple as it sounds.

If the player you’ve bet on hits the net for his team in regulation time (90 mins + stoppages) you win!

When bookies open an anytime goalscorer market for a fixture, you can generally back any player from either team to score.

So, whether you fancy staking on an odds-on prolific poacher, a penalty kick expert, a corner threat with a big price or a player on a hot streak – the bookmakers have you covered.

Below, we’ve focused on Wednesday’s mouth-watering Serie A fixture programme to compile a list of players to watch out for in the day’s anytime goalscorer markets complete with a tasty looking 32/1 acca.

Remember – you can find of all our latest betting tips and Italian football match previews on our Serie A predictions page.

Veteran Sassuolo striker Francesco Caputo has enjoyed a stellar season in 2019/20, and the 32-year-old has already rammed home 19 Serie A goals in what has been the most prolific top-flight campaign of his career.

Having found the net in four of his last five appearances for the Neroverdi, Caputo looks razor sharp ahead of his latest test against fourth from bottom Genoa this week, and the experienced centre-forward is well priced to maintain his purple patch at Il Grifone’s expense.

Fresh from hitting a phenomenal goal direct from a free-kick for Milan in his last appearances against high-flying Atalanta, Turkish set-piece specialist Hakan Calhanoglu will be hoping to boost his numbers for the season again when he lines up against Sampdoria on Wednesday.

Five of the 26-year-old’s eight Serie A goals this season have come after the restart, and after a run of three strikes in his last four matches for the Milanese giants, Calhanoglu’s confidence should be soaring.

In-form Roma take their show on the road on Wednesday when they leave the capital to take on Torino, and the increasingly influential away day performer Nicolo Zaniolo is one to watch for the Giallorossi again.

Zaniolo has been saving some of his best work for Roma’s fixtures away from the Stadio Olimpico this season, and the Italian midfielder found the net in three of this last four starts on the road for his club.

Serie A’s leading marksman Ciro Immobile will be out to fill his boots again on Wednesday, when Lazio host second from bottom Brescia in the Eternal City.

Immobile has already punished relegated Brescia with his deadly finishing this season, hitting both of his team’s goals in the Biancocelesti’s 2-1 win at the Mario Rigamonti Stadium in January, and the 30-year-old will back himself to match that tally in this week’s return fixture.

The Italian international added three more goals to his haul for the campaign in Lazio’s recent 5-1 win at Verona, taking his total for the season up to 34 in 35 starts, and Immobile is worth backing to make his mark again despite his short odds.

While any Cristiano Ronaldo inclusion in an anytime goalscorer accumulator borders on the unimaginative, the Portuguese superstar’s generous price to notch at Cagliari means we just can’t leave him out.

The 35-year-old hit a stunning hattrick when Juve tore Cagliari apart in the clubs’ last encounter in the first week of January, and having scored a sensational 10 times in 10 Serie A appearances since the restart, Ronaldo’s touch seven months’ later is still as sharp.

Ronaldo is three goals shy of Ciro Immobile in the race to be crowned the league’s top scorer for 2019/20, and with just two games left to close the gap, the ex-Real Madrid icon will be going all out to register this week.

A five-fold selection featuring our goalscoring picks above is available at 32/1 odds with bet365! Click the banner below to add our acca to your betslip now.