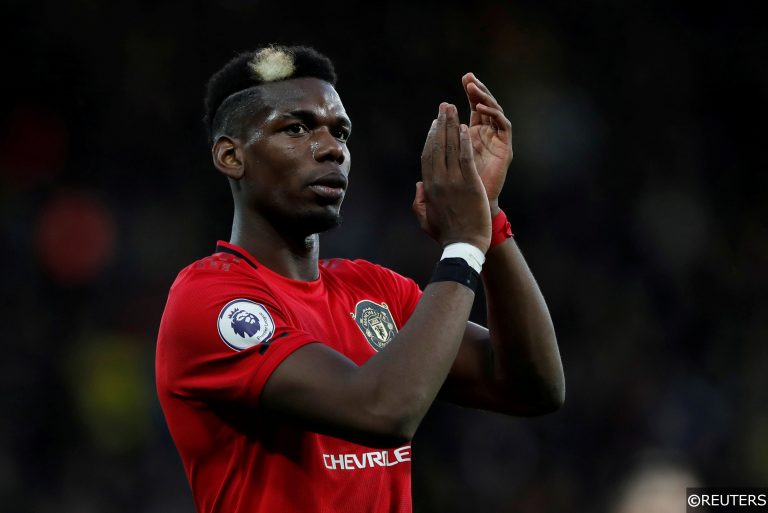 Paul Pogba’s Manchester United homecoming in 2016 was intended to turbo-charge the club’s rise back to the summit of English football, yet four years on, the Frenchman’s time with the club looks like petering out towards an insignificant exit.

A thousand and one headlines have been spun from Paul Pogba’s fractious relationship with Manchester United over the past four seasons, though the Frenchman’s controversial spell with the club looks like ending in the summer.

Manchester United’s poor finish to the 2018/19 campaign made social media devotee Paul Pogba a lightning rod for criticism among the club’s increasingly irate support, but having resisted offers to sell the midfielder during the transfer window, there was hope at United that rapport could be rebuilt between all parties ahead of the new season.

Pogba hit the ground running in 2019/20 with a fine individual performance and two assists in United’s 4-0 demolition job on Chelsea, but after just a handful of subsequent appearances, the enigmatic schemer was side-lined with an ankle injury.

The 27-year old flirted briefly with a return to first team action in late September, but a recurrence of his ankle injury forced him back out of contention until December.

Pogba seemed to be finding fitness again before the turn of the year, playing an hour over two fixtures against Watford and Newcastle before his mysterious ankle ailment had him back on the treatment table.

With the date of Pogba’s return pushed back and back again by Ole Gunnar Solskjaer, doubts began to surface about the severity of the player’s injury, amid heightening speculation about his future at United, fuelled by blowhard agent Mino Raiola.

By the time the Coronavirus had ended the season prematurely, Pogba had started just five of Manchester United’s 29 Premier League fixtures in 2019/20, and the French World Cup winner hasn’t been seen in Red since December 26th last year.

Click here to read about the Premier League’s dirtiest players in the 2019/20 season.

United begin to thrive without Pogba

While Pogba tried to maintain his relevance off the pitch through indirectly agitating for a move away though his brothers along with his representative and mouth-piece Mino Raiola, United began to make strides on it.

Pogba’s absence has left a giant hole in the club’s midfield, though Brazilian Fred and the emerging Scott McTominay led a United resurgence characterised by a togetherness and “all for one” mentality that seemed at odds with Pogba’s individualism.

In January, Portuguese innovator Bruno Fernandes arrived at Old Trafford from Sporting Lisbon to replace the creativity vacuum left by Pogba in the team’s middle third, and United haven’t looked back since.

While positivity seems to be spiking among United supporters, there are fears that a Paul Pogba return could see the side’s hardening team spirit softened again by a want-away player pushing for an Old Trafford exit.

With Bruno Fernandes so impressively pulling the strings, the demand for Pogba’s skill-set at United isn’t as high as it might have been three months ago, and Solskjaer might think that the time is right to cash in on the Frenchman and cut loose the circus that comes with him.

Despite his long-term injury absence, Pogba retains his profile as one of football’s most recognizable and marketable figures– something that won’t have been lost on his list of big-name suitors.

His marketability is something that United, a club with a major commercial focus, will value just as highly, though the decision makers at Old Trafford will accept that keeping a player that holds significant dressing room power against his will is a dangerous game.

There is still a year remaining on Pogba’s current contract and United have the option to trigger an extra year clause on the deal – a clause they are likely to invoke to protect the player’s value.

So far, both Real Madrid and Juventus have been credited with a major interest in signing Pogba, and the midfielder has plenty of reasons to join either club.

Reports from Spain suggest that Real Madrid manager Zinedine Zidane has pressed home the importance of signing Pogba in the summer as part of the club’s major rebuild.

Real are long-time admirers of the Paris-born French international, and having been rebuffed in their attempts to sign him last year, Los Blancos will feel their chances to wrestle him away from United have never been higher.

Rumours continue to bubble in Italy suggesting that Juventus are putting a package together to bring Pogba back to Turin four years after flogging him to United.

The chance to team up with Cristiano Ronaldo is likely to be a major incentive used by Juventus to tempt Pogba back to Italy, though United are believed to be demanding a premium on the fee they paid to sign the midfielder in 2016.