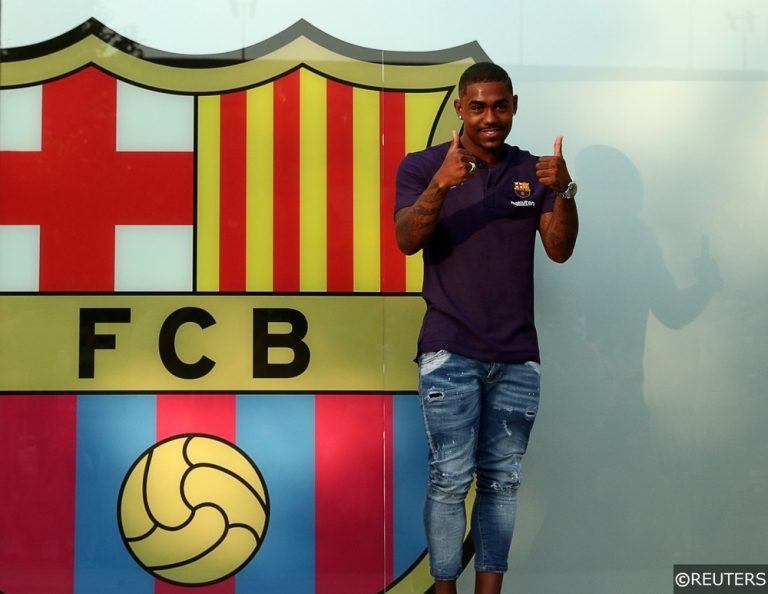 From Romario and Ronaldo through to Ronaldinho and Neymar, just about every great Brazilian attacking talent of the past few decades has donned the iconic jerseys of FC Barcelona at some point in their careers. The latest Brazilian addition to the illustrious group is Malcom who completed a transfer from Bordeaux this week. The fee is believed to be in the region of £37 million, making the winger Barcelona’s biggest summer addition to date.

He is the second 21 year old Brazilian to sign for the Catalan giants this month with Arthur having recently completed a switch from Gremio for £28 million. In this day and age, both signings represent relatively tentative steps into the transfer market for one of the biggest clubs in world football to make and it’s clear that Barcelona are getting potential rather than the finished article in both cases.

However Malcom has been touted as a long-term successor to Neymar and Ernesto Valverde will be hoping that he could have an impact at Camp Nou next term following on from two impressive seasons in Ligue 1.

Malcom in the Middle – A Summer Transfer Saga

Legend has it, that to this day, Roma fans are still waiting for Malcom’s arrival at the airport. pic.twitter.com/FEl0BPdeRs

It wouldn’t be the summer transfer window without a transfer saga that borders on the ridiculous and few this year top that of Malcom. He looked destined to complete a switch to Roma earlier this week with the Italian giants agreeing a £32 million fee with Bordeaux. Many media outlets reported a done deal and there were even Roma fans who turned up at the airport in anticipation of a plane arriving with their latest signing on board.

However that wasn’t quite the end of the matter. Barcelona made a late swoop to sign the Brazilian, offering the French club an extra £5 million on top of the figure they’d already agreed to sell him for and before long Malcom was on a plane arriving in Catalonia rather than the Italian capital.

Barcelona have since completed the deal but needless to say it’s a story that we may not have heard the last of. Roma president James Pallotta is furious and has accused Barcelona of behaving ‘unethically and immorally’ and is clearly not in forgiving mood. ‘The only way I’ll accept Barca’s apology is if they send the player to us, and that’s not going to happen’ he claimed. ‘Maybe, as a goodwill gesture, the very least they could do is send us Messi.’

What has the reaction been in Barcelona?

Malcom: 🗣 “Here I will play with the best players in the world… I am realizing a dream that I have had since childhood.”

How do you see @FCBarcelona lining up with their new man? 🤔#LaLiga #FCB pic.twitter.com/ZKhrPhGsNZ

It’s probably fair to say that Barcelona fans aren’t quite as excited as their Italian counterparts were at the supposed arrival of Malcom. That’s not necessarily a snub of the new signing but more out of frustration at the hierarchy at the club which is seen to have made a mess of their transfer business over the past twelve months and has so far brought in potential rather than established quality this summer.

Many Barcelona fans haven’t quite forgiven the board for the departure of Neymar, whose release fee was supposedly out of the reach of even the top clubs in Europe before the Brazilian superstar dropped a bombshell by moving to Paris last summer. If that was hard to take, their subsequent failure to land Antoine Griezmann has further ignited their anger. The Frenchman’s impending switch from Atletico Madrid to Barcelona was the worst kept secret in Spanish football last season with even Diego Simeone and Atleti appearing to have reluctantly accepted the move would go through this summer.

Griezmann’s decision to stay put caught everyone off-guard and has led to a total rethink of Barcelona’s summer plans. Perhaps aware that their squad is starting to age, they’re looking to the future with the signings of Malcom, Arthur and Clement Lenglet. That may not be a bad thing in the long run but they are yet to really sign a player who is certain to improve their starting eleven for the upcoming campaign.

Malcom is a relative unknown in Spain as somebody who has never played in the Champions League and didn’t feature at the World Cup so it’s only natural that there isn’t a great deal of excitement surrounding his signature. That though could help ease the pressure on the 21 year old who may be afforded some time to settle in without people demanding immediate results, which has been a problem for recent arrivals at Camp Nou.

How will Malcom Fit in?

Infographic: Malcom’s stats for Bordeaux in the 2017/18 season. pic.twitter.com/TRosjHmLm3

The signing of Malcom is an interesting one in that it appears to offer real clues as to how Barcelona’s tactics and formation is likely to evolve over the next year or two. Last season, they tended to play 4-4-2 with Luis Suarez and Leo Messi up top and often a fairly narrow midfield, sometimes consisting of four more natural central midfielders.

Malcom doesn’t appear to be a good fit for that system given he basically operates as an attacking winger or right-sided forward, where he played mostly for Bordeaux last term. He is viewed as somebody who could ultimately do a similar job to Neymar by operating from the flanks and that has fuelled speculation that Barcelona will switch back to more of a 4-3-3 this term. That may see Philippe Coutinho occupying the central midfield role left by Andres Iniesta and Malcom competing for a start out wide with Barcelona rumoured to be in the market for another wideman following several rejected bids for Willian.

Barcelona have clearly seen enough in him to believe he can play an active role this season and unlike fellow Brazilian arrival Arthur, he is already familiar with the European game and certainly against the weaker teams in La Liga he could see plenty of action. In the bigger league matches and Champions League games, Malcom may be used as an impact sub as someone who could come on and provide a burst of energy in the final twenty minutes.

Where does this leave Dembele?

1. How do Barcelona fit Malcom and Ousmane Dembele in same team next season? – https://t.co/EXmisARiXz@muhammadbutt looks at five ways their attack can line up throughout the 2018/19 season. 👬 pic.twitter.com/WgDZlrtGlu

The elephant in the room may just be Ousmane Dembélé. He joined the Catalans last summer as a potential Neymar replacement for a fee that was set to rise to in excess of £100 million. While injuries halted his settling in to life at Camp Nou, that now more and more looks like a panic buy with Barca already rumoured to be considering cutting their losses on the Frenchman.

It’s certainly hard to see how Dembele and Malcom would fit into the same team and the very fact that Barcelona are in the market for wide players, suggests they don’t have any confidence in Dembele’s ability to be a mainstay of the team in the coming season. Apart from a few glimpses of his quality, he showed precious little last term to suggest he is ready for that and Malcom may in the long-run prove to be the shrewder purchase.

The fact Roma were in for him is clear indication that former Sevilla and now Roma Sporting Director Monchi is an admirer and his opinion is widely respected across Spain following the miracles he managed to work in Andalusia. Lenglet was also a Monchi signing so there is cautious optimism that Barcelona have done some good business this summer but the overriding mood is still a sense of frustration at missed opportunities and the signing of Malcom does little to change that.