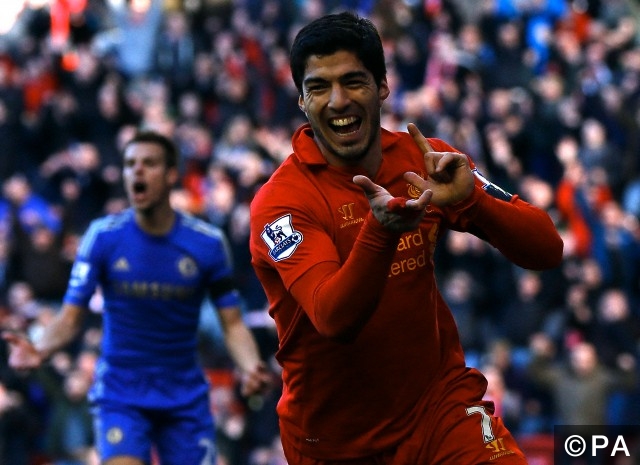 The £22.8 million acquisition of Luis Suarez from Ajax on deadline day in 2011 was overshadowed by Andy Carroll’s arrival just a few hours later, but for a (very) short time the Uruguayan was the most expensive signing in Liverpool’s history. Now unquestionably one of the world’s best players at Barcelona, Suarez was an unstoppable force in the Premier League, scoring 82 goals in 133 games for the club. Kenny Dalglish’s second spell as manager will be remembered for some dodgy signings, but his decision to bring Suarez to the club has had a huge impact on Liverpool’s recent history.

Understandably, when a Championship club spends £400,000 on an Algerian winger from French club Le Havre it fails to make the headlines. But the capture of Riyad Mahrez in January 2014 should be considered one of the most extraordinary bargains in the history of football. Having propelled Leicester to the top of the table this season with 13 goals and seven assists in 21 games, Mahrez will most likely be sold for around £30 million in the summer; that’s a 7500% increase in price in the space of 18 months.

Although his recent performances have been heavily criticised, it should not be forgotten that Branislav Ivanovic has played 335 games for Chelsea and scored 31 goals since his arrival from Lokomotiv Moscow in2008. In that time he was won two league titles, three FA cups, the Europa League, and the Champions League, commanding the right-back spot with an aggressive attacking mentality that has always endeared him to the Chelsea fans.

When Nemanja Vidic was signed by Manchester United from Spartak Moscow in January 2006 it did not cause much of a stir. Alex Ferguson was largely using Wes Brown alongside Rio Ferdinand in central defence, and although the Old Trafford faithful were crying out for a new world-beating centre-back few thought a £7 million signing from Russia would be the answer. Nine years, 308 appearances, five league titles, and a European Cup later, Vidic is a club legend; his partnership with Ferdinand was the single biggest factor in Ferguson’s revival after a dry spell in the early noughties.

A few days after Vidic’s transfer Patrice Evra joined for £5.5 million from Monaco. His transfer would prove to be one of the greatest bargains in Premier League history as the Frenchman became one of the world’s most revered full-backs and a symbol of the evolution of the role. Evra matched the intelligence and work-rate of Gary Neville with a speed and creative flair that became a vital part of United’s personality; overlapping full-backs were always a vital aspect of Ferguson’s tactics, and in Evra he had found the perfect player. Eventually promoted to club captain, Evra made 377 appearances for United over nine seasons.

Ever since he burst onto the scene as a 16 year old at Man City, it was clear that Daniel Sturridge was one of the most talented footballers of his generation. Although injuries have plagued his career Sturridge has always had offers, and in January 2013 Liverpool paid £12 million to take him from Chelsea. Whatever happens over the next few years at Anfield, Sturridge will always be remembered for forming that “SAS” partnership with Luis Suarez in the 2013/14 season when Brendan Rodgers’ side came agonizingly close to winning the league title. Liverpool scored more than 100 league goals that season, with Sturridge and Suarez holding one and two in the goalscoring charts. To date, he has 44 goals in 73 appearances for the club.

Fulham signed Clint Dempsey from MLS team New England Revolution for just £2 million in January 2007, and the American would become a club legend after some heroic performances in their Europa League run under Roy Hodgson. In his first season he scored the winning goal against Liverpool that ensured Fulham’s Premier League survival, and in 2010 his magnificent chipped goal completed the comeback in Fulham’s famous 4-1 win against Juventus. He scored 60 goals in 231 appearances for the club.

Javier Mascherano had endured a torrid time at West Ham before Liverpool came in with a loan offer in January 2007. The Argentine had been highly rated before his ill-fated move to East London, and it was not long before he formed a superb partnership with Xabi Alonso at Anfield. His career highlight at Liverpool was the 2007 Champions League final, but Liverpool were unable to sustain title challenges in his years at the club. After 139 appearances and two goals, he moved to Barcelona in 2010.

By the end of the 2013/14 season the January signing of Nemanja Matic was seen as the perfect signing by then manager Jose Mourinho. A combative player capable of controlling central midfield with casual aplomb, he was the final piece in the puzzle and well worth the embarrassing £25 million fee it took to bring him back to the club. His performances this season have been called into question, but the Serb will certainly return to form once his team-mates sort themselves out. Deservedly placed in the PFA Team of the Year last season Matic was arguably the most important player in Chelsea’s league title campaign of 2014/15.

When Aston Villa signed Ashley Young from Watford for £9.75 million in January 2007 fans were slightly apprehensive. Martin O’Neill’s track record with signing players was hit-and-miss, and Young made a poor start to life in Birmingham. However, after a tricky first few months he became a firm fan favourite and an integral part of the Villa side that almost finished fourth in 2008. He moved to Man United in 2011 for around £14 million after scoring 39 goals in 193 appearances; an excellent piece of business for the club.

Having a bet today? Check our our football accumulator tips for your chance to win big!