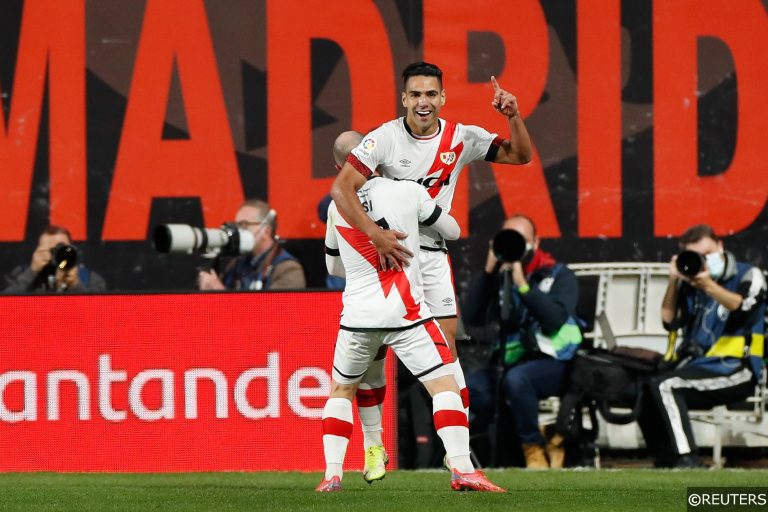 As November begins we’re all glancing towards the festive schedule and the non-stop football, but this week isn’t bad either. The Champions League and Championship dominate in midweek before the domestic leagues return.

With a busy five days of football in prospect before next weekend we’ve picked out an accumulator covering this week’s best action. With a selection from each day our Long Haul Accumulator clocks in at 35/1, a tip which you can back below.

It’s been a stellar season for Rayo so far, with a 100% record behind them at home. The hosts are making a push for a European place following their impressive win over Barcelona last week – the result which ended Ronald Koeman’s spell at the Camp Nou.

However, Rayo’s record shows that setback wasn’t as embarrassing as it looked on paper. The hosts have been fired up the table by the brilliance of revitalised forward Falcao, so expect him and Rayo to make short work of a Celta side who have lost seven of 11 games.

Nottingham Forest have taken a point from their last two games, but those two results seem to have soured the bookies’ thoughts on Steve Coopers’ side. Losing heavily to Fulham and drawing with QPR isn’t the worst return, while it certainly doesn’t spell doom for them against a struggling Sheffield United side.

Saturday’s defeat to Blackpool was the Blades’ fourth in six starts and that suggests that Forest have a chance to return to winning ways. Before their recent blip the hosts had won four of five starts and we think they’re worth backing to bounce back at not far off 2/1 at the time of writing.

Wednesday night sees the Championship leaders back in action following their routine victory at Reading on Saturday night. The Cherries are looking every inch the best side in the second tier having won their last five, keeping four straight clean sheets.

Preston won at home to Luton at the weekend but they aren’t doing well on the road. They’re winless through seven trips, losing visits to all three of the top eight sides they’ve faced. Bournemouth have won their last five at home and that run looks good to continue.

Leicester won at Spartak Moscow in their last European game but it took a seven-goal thriller for them to gain the points. The Foxes have conceded in every game in this group so far, while they meet a Spartak side who have seen BTTS land in their last four games. Back another high-scoring battle between these two at the King Power.

Troyes held Rennes to a 2-2 draw on Sunday and that continued their good run of form. They head to Lens having scored five across their last three, picking up seven points. That might not be enough to stop third-placed Lens, but we see the visitors scoring. The hosts lost 2-1 to Lyon at the weekend and they’ve kept only two clean sheets in nine despite their promising start.

In The Mixer: Experts pick their Ballon d’Or winners