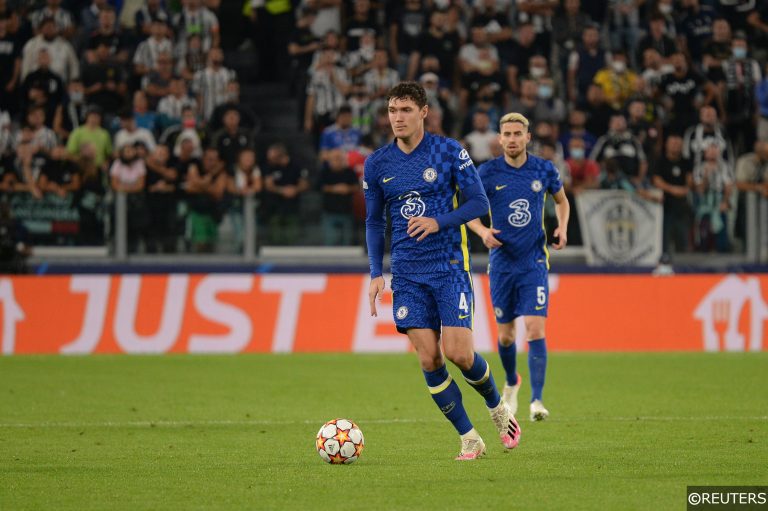 Liverpool’s clash with Man City is a must-watch game for anyone who follows the Premier League. However, for Fantasy Premier League managers its an awkward one to navigate, especially with no standout captaincy options stepping up.

Another tricky problem this weekend is the possibility that the game’s four most-popular defenders need to be swerved. Luke Shaw has been underwhelming and he’s an injury doubt. Trent Alexander-Arnold and Marcos Alonso look unlikely to feature, while Ruben Dias isn’t one to invest in ahead of a trip to Anfield.

Replacing them will be crucial, especially if you’ve triggered your wildcard. Here we’ve got some alternative picks for your backline and your armband this weekend.

Tierney is owned by only 6.4% of FPL bosses despite his reasonable £4.9m price-tag. The Gunners are looking better of late and their fixtures look pretty favourable through to November. They play Brighton, Crystal Palace, Villa and Leicester this month before hosting Watford.

That run should bring clean sheets, while Tierney is a threat going forward. Expect the Scot to get in on assists during that good run. Of course, bonus points should then follow. With so many managers missing out on Tierney, he could give you an edge.

With three clean sheets from six games, Aston Villa are a reliable defensive side. They’ve recently moved to a three-man defence to tighten things up, which pushes Matt Targett and Matty Cash further up the pitch.

Both are cheap, at £4.8m and £5m respectively. However, Cash has twice as many points as his fellow wing-back so that extra £0.2m is worth it. Cash is able to chip in with goals and assists and he has a reliable defensive set-up behind him, so expect plenty of points back for a fraction of your budget.

It hasn’t been the best week for Thomas Tuchel, but his Chelsea side remain a defensive force. Andreas Christensen has been a key part of that, starting five of Chelsea’s six games this term. Despite that, the Dane is £5m and owned by only 3.4% of managers.

To top that off, Chelsea have one of the best runs of any Premier League side. Their next five league matches pit them against Southampton, Brentford, Norwich, Newcastle and Burnley with three of them at home. If you want a cheap route into the Blues’ backline during that run, then look to Christensen.

Leeds haven’t enjoyed the best start, but they will expect to find their first win before the end of October. Marcelo Bielsa’s side face Watford, Southampton, Wolves and Norwich next. November pits them against Leicester, Tottenham and Brighton, so any Leeds asset should be a long-term investment.

Firpo could be the player to stand out during that run. He hasn’t produced a goal or an assist yet, but he’s getting involved with 0.71 shots per game and 0.95 key passes. With the fixtures improving for Leeds, it’s worth getting a £4.8m option who 99.5% of FPL bosses are sleeping on.

With Liverpool and Everton on the horizon for Watford, FPL bosses will likely be turning their backs on Sarr shortly. However, he remains a bargain at £6.3m and he’s arguably a great option for the armband this weekend.

With 24 points across the previous two gameweeks, Sarr is proving himself at this level. He landed 15 points in his last away game, so this weekend’s visit to Leeds could see another big haul from the Watford man.

Leeds have big issues in defence and they’re vulnerable after a poor start, so it’s worth considering Sarr for captaincy to potentially get an edge on your rivals.

4 winners on Tuesday including 11/1 goalscorer acca