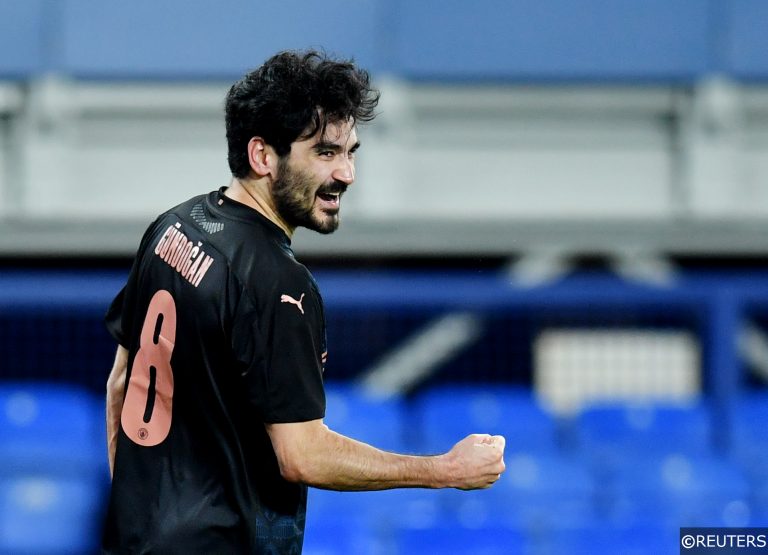 It’s crunch time in the Champions League and two teams will emerge from this week’s crucial semi-final second-legs to book their ticket to Istanbul for the competition’s final later this month.

On Tuesday, Manchester City are bidding to reach their first-ever Champions League final and with two away goals to build on, the Citizens hold all the cards ahead of their clash with PSG at the Etihad Stadium.

24 hours later, Chelsea and Real Madrid meet for a showpiece showdown at Stamford Bridge where the Blues hold a slight advantage following the 1-1 draw between the heavyweights in Spain.

With both matches being screened live on BT Spot, plenty of punters will be looking to build their very own bets for the semi-finals – and below, we’ve compiled some tips with that in mind.

Manchester City have never been closer to a Champions League final in their history and the 2-1 first-leg lead they established over PSG in Paris last week makes them huge favourites to reach the promised land in Istanbul.

The Citizens aren’t built to sit deep and counter however and with nerves set to jangle on a potentially historic evening for the club, the Parisians could spoil the party.

PSG are superb on the road and they have counter-punched their way to glory in each of their last three Champions League games outside Paris with wins at Man Utd, Barcelona and Bayern Munich. Their potency as the visiting team makes backing PSG double chance worthwhile on Tuesday.

In Wednesday’s semi-final, taking Real Madrid in the double chance market also appeals. The current Los Blancos outfit under Zinedine Zidane are a far cry from thrilling Real teams of yesteryear, though they aren’t short of resilience.

Real are unbeaten in 19 games in all competitions and they could carve out a result against a Chelsea team that has failed to win three of their last four tests at Stamford Bridge.

With explosive counter-attacking power at their disposal and a backline that regularly offer up chances to their opponents, PSG’s Champions League away games are rarely dull and over 2.5 goals have been notched in nine of their last ten matches on the road in the tournament.

PSG need goals to swing their tie with Man City back in their favour and their pursuit of parity should create an exciting second-leg at the Etihad Stadium, so back over 2.5 goals to be registered again.

Thomas Tuchel has transformed Chelsea into one of Europe’s most steely defensive teams since his appointment back in January, and an incredible 20 of the Blues’ 23 fixtures under the German tactician have produced under 2.5 goals.

Last week’s first-leg in Madrid was low on clear-cut opportunities and the return fixture promises to be just as cagey. Bettors are advised to back under 2.5 goals to be scored again.

Last week in Paris, the teams mustered ten shots on target between them and the most prolific Manchester City player in that arena was the increasingly influential Phil Foden.

The diminutive schemer racked up three attempts on target in the French capital and the 20-year-old is likely to feature just as heavily when the teams reconvene in Manchester. It could be worth backing Foden to hit 2+ shots on target as a result.

PSG’s Angel di Maria also jumps out at an interesting option for the away team in the same market. The Argentinean winger is never shy about letting a shot off and the ex-Man Utd man took four shots against City last week, with one of his efforts on the mark. Those numbers scream that the 33-year-old is priced generously to notch 1+ shots on target in the return leg.

In London, Karim Benzema looks an interesting option at evens to test Chelsea stopper Edouard Mendy at least twice. Though Real lack punch in the final third overall, in Benzema, they have an individual with plenty of knockout power.

The Frenchman took four shots in the first leg, scoring with one and hitting the woodwork with another.

Last week, we correctly identified PSG anchorman Leandro Paredes as one to watch in the card markets and the Argentinean destroyer was cautioned after 70 minutes of the first-leg.

With his midfielder partner-in-crime Idrissa Gueye banned following his horror tackle on Ilkay Gundogan and subsequent red card, Paredes will have to shoulder even more defensive responsibility on Tuesday, and that makes him an outstanding candidate to get booked again.

At Stamford Bridge, Casemiro stands out in the same market when Real Madrid land in London to face Chelsea. The no-nonsense Brazilian has been booked four times in the Champions League this season, though it’s worth noting that three of those yellow cards were picked up in away games for Los Blancos.