The first international break of the season is a tempting time to hit the panic button. We’re only three weeks into the new Premier League season, but that’s enough time to spark worries about your initial draft.

I know many of you will be considering a wildcard before FPL returns for Gameweek 4. Let me take the plunge first, with my latest wildcard draft and transfer tips below.

Don’t forget to keep yourself entertained over the international break by checking our latest match predictions for the World Cup qualifiers. 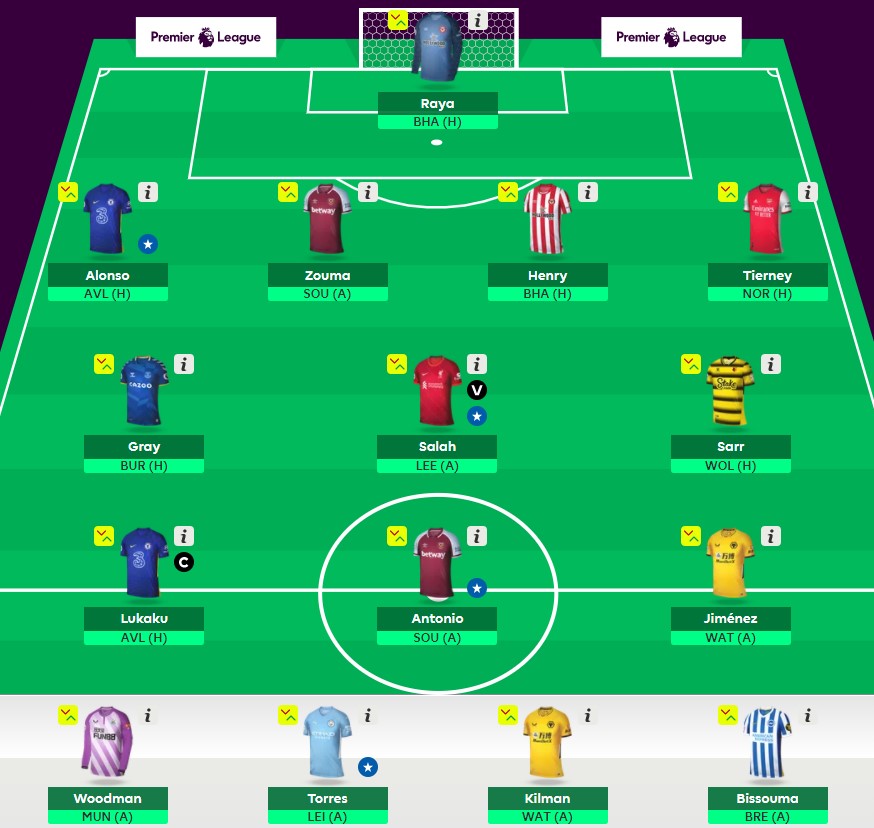 Despite a solid start to the season this wildcard draft represents wholesale changes aimed towards the sides with the best fixtures over the next month or so.

There are probably a few left-field picks in this draft, so let’s get into the reasoning behind this shake-up.

Marcos Alonso (£5.7million) remains after an impressive start ahead of a great run of fixtures for Chelsea. Outside of that it is all change, with his former teammate Kurt Zouma (£5.4m) joining him. The Frenchman scored five times for Chelsea last season despite rarely featuring under Thomas Tuchel, so expect him to be a major set-piece threat for the Hammers.

There are some good, cheaper options to round off the defence. Kieran Tierney (£4.9m) has no business being under £5m and it’s worth getting him now before he bounces back during Arsenal’s upcoming good run. Brentford’s Rico Henry and Wolves man Matt Kilman (both £4.5m) are good rotation pieces at the back.

In goal I’ve got another rotation duo, with David Raya (£4.5m) settling in well at Brentford. He’s joined by Freddie Woodman (£4.5m), who is good value with Newcastle’s other keepers out for the time being. With Tottenham looking a bit rigid and Cristiano Ronaldo likely to hamper Bruno Fernandes, I don’t think this is the time to go big in midfield. Of course, Mo Salah (£12.5m) is hard to ignore at any price. Ferran Torres (£7.1m) remains in the side after last weekend’s 18-point haul.

Outside of that there are budget picks with good fixtures. Brighton’s Yves Bissouma (£4.6m) will be a consistent contributor who frees up a bit of budget. The same can be said for Demarai Gray (£5.6m) with his 17 point haul across the last two gameweeks.

Finally, Ismaila Sarr (£6m) can build on his great showing in GW1. Wolves, Norwich, Newcastle and Leeds is a good run of games for the Hornets and Sarr is their standout option.

Chelsea may have Tottenham and Man City to come in their next eight, but those are the only two matches in that run listed higher than 2 in FPL’s fixture difficulty rating. That run should provide big returns for Romelu Lukaku (£11.5m).

Beside him Michail Antonio (£7.9m) can’t be ignored thanks to a brilliant start. The Hammers have a fairly good run ahead and as long as the striker can stay fit he should make a mark.

Finally, Wolves have a great run of fixtures ahead. Watford, Brentford, Southampton, Newcastle, Villa and Leeds are their next six. What better time to reintroduce FPL hero Raul Jimenez (£7.4m)?

The Mexican has had a slow start, but I can’t see that continuing through this run.

The Long View: How far can Benitez take Everton?