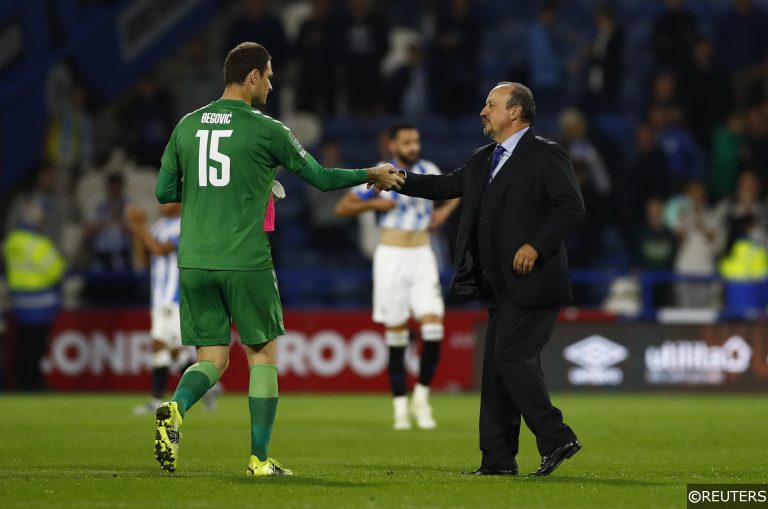 Rafa Benitez’s arrival at Everton always looked like it would cause problems and here we are, with their players squabbling on the pitch after only three games.

However, those three games have yielded seven points for the Toffees and things are potentially looking up at Goodison Park.

Last week The Long View looked at Chelsea’s title hopes, but this time we’re looking at Everton’s ceiling under Benitez.

Everton feel like a side who somehow wind up seventh and play European football every season, but even those dizzy heights have been beyond the Toffees in recent years.

While it is early days, there appears to be an opening for Everton make their way back into European contention this term. Of the so-called Big Six we can seemingly rule out Arsenal, a side who are now just 20/1 to be relegated this season.

Leicester have had a patchy start and West Ham’s draw with Crystal Palace point to inconsistencies, something which the unspectacular Benitez can exploit.

Everton have built a squad with a lot of talent and if they can get organised defensively they could be onto something. The Toffees have appointed the right manager to do that, without risking their attacking strength.

Richarlison and Dominic Calvert-Lewin may have been wrestling for the ball ahead of their penalty on Saturday but neither will be short of chances this term. However, Calvert-Lewin looks to be the main man under Benitez.

The inspired £1.7million signing of Demarai Gray has allowed Benitez to tailor his side to DCL. Andros Townsend joined on a free, giving the Toffees a pair of wingers and a pair of full-backs who can supply their striker with chances. Richarlison dropping deep also helps the England forward, making the most out of Everton’s attacking options.

Having scored in every game this season so far, Calvert-Lewin looks set for a great campaign. If Everton are to thrive this season, then it’s worth considering him as a great outsider in the golden boot race.

Toffees can stick in the top six

Everton’s unbeaten start has seen them cut to 2/5 for a top 10 finish, while they’re 11/4 to make their way into the top six this term.

I wouldn’t be surprised if Benitez can make this start stick at Goodison Park. While they could probably do with defensive additions, they seem well organised with the firepower to win games.

You’d certainly rather be in Everton’s shoes than Arsenal’s, with the Gunners looking lost after their goalless, pointless start.

I’m also worried about Leicester’s chances after two narrow wins and a heavy loss to West Ham. The Foxes have injury issues, complications of European football and possibly too much expectations on them this term. The same could be said of the Hammers.

Everton can play a settled side with no European football to concern them and they’ve got talent throughout the side. If this good start can last, then the negative atmosphere that was anticipated at Goodison could turn positive.

While we’re still early in the season, there’s an opportunity for Everton to split the big six, never mind simply chasing them. As a result, you might want to consider them at 4/1 in the without the big six market.