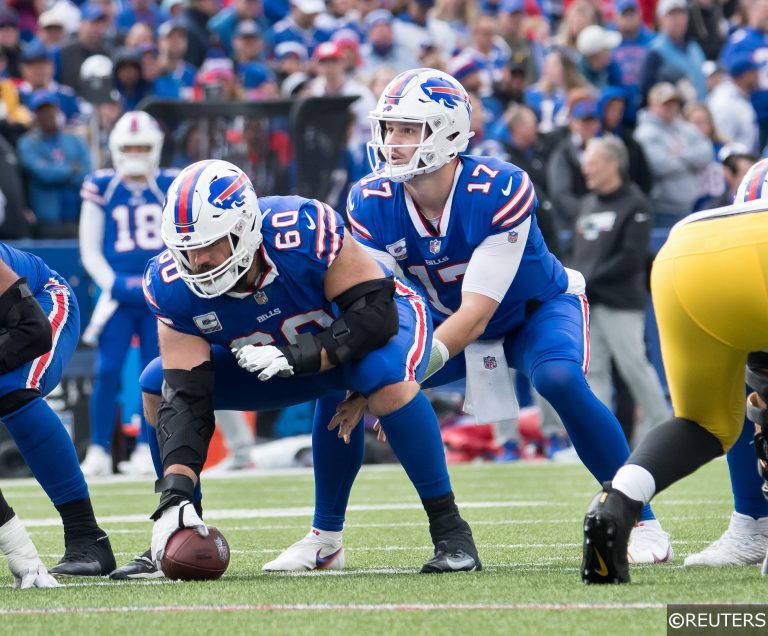 With both off to 4-1 starts this season, the Buffalo Bills and Kansas City Chiefs are setting themselves up for an AFC Championship showdown on the way to the Super Bowl next year.

The pair meet in Sunday’s featured game and ahead of the clash we’ve got a fivefold bet builder which can be backed at 11/1!

January’s Divisional Round playoff game between these two served up the game of the season, with the Chiefs emerging victorious in a wild shootout, but the Bills had it won until coaching error with 13 seconds left left the door ajar for Mahomes and co to work their magic.

The game is again in Arrowhead, but we’re confidently taking the Bills to exact revenge in a game that has no doubt been circled on the calendar since the schedule was released, with it also noteworthy the Bills comfortably handled Kansas 38-20 on the road in week 5 of last season.

In a Super Bowl or bust season for Sean McDermott’s squad, this is likely a must-win game if the path to the Super Bowl is to run through Buffalo on the AFC side of things.

To keep it simple, this is a better Bills team than the one in Janaury, with superstar QB Josh Allen continuing to look unstoppable and the defense, despite some injuries, able to bring relentless pressure with a deep defensive front. And unlike in the January clash, the Chiefs have no Tyreek Hill this time, him having been the difference-maker in that match up.

The Bills piled up 38 and 36 points in two games against the Chiefs at Arrowhead last season and there’s little reason to believe Josh Allen won’t lead his team to at least 28 points this time, with the Chiefs defense having looked vulnerable at times, especially to the big play over the top, in a narrow winning effort against the Raiders this past Monday night.

Allen is the best player in the league and gets his chance to cement his position as MVP favourite by outduelling Mahomes here. Allen threw for 315 and 329 against the Chiefs in two meetings last season and should be able to top 300 yards once more, with news that Chiefs starting cornerback Rashad Fenton is out meaning they’ll likely be starting a pair of rookies at the position.

As well as boasting a cannon-like arm, Allen is an elite runner when breaking the pocket, with head coach Sean McDermott always more willing to unleash his QB on the ground when the stakes are high. This is certainly one of those occasions. Allen carried 11 times in both match-ups against the Chiefs last season, leading his team in rushing on each occasion with 59 and 69 yards. He can top his mark once again here.

Davis torched the Chiefs defense in the Divisional matchup in January, hauling in 8 catches for a whopping 201 yards and 4 touchdowns! Although we can’t expect that sort of performance again, Davis showed himself back to full health last week against the Steelers (3 catches for 171 yards) and can again cash in on Kansas focusing their attention on Stefon Diggs (held to just 5 catches in the two matchups last season).