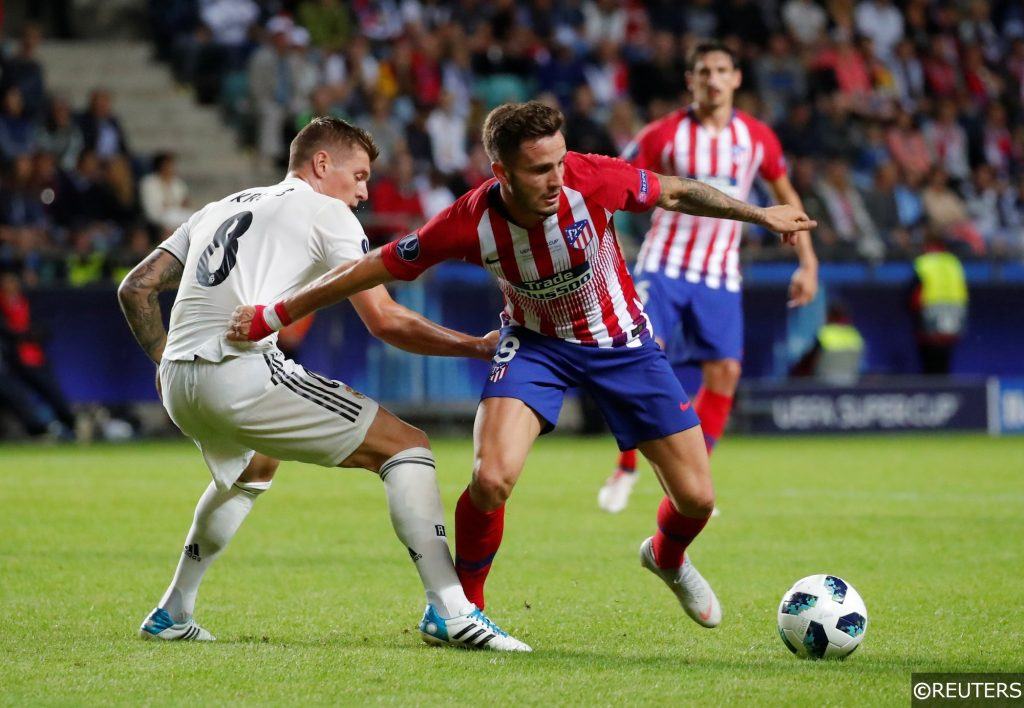 The glitz and the glamour of the Champions League returns to stadiums and screens this week, with 16 potentially pivotal Group fixtures scheduled to be played across Tuesday and Wednesday evening.

Today we’re focusing on Tuesday’s games where the highlights include Juventus’ high-profile meeting with Atletico Madrid in Group D, Real Madrid’s exciting looking tie against PSG in Group A and Tottenham’s Group B clash with Olympiakos in Jose Mourinho’s first home match in charge.

Ahead of the action, we’ve compiled a list of player specials for Tuesday’s Champions League fixtures. Take a look at our selections below:

Remember – we’ll be covering all of this week’s UCL action in detail on our Champions League predictions page.

Saul Niguez to get booked (Juventus vs ATLETICO MADRID)

Atletico Madrid carry a reputation for being a ferociously combative unit under the instruction of hard-nosed Argentine boss Diego Simone, and the figures behind that notoriety back that assertion up.

Atletico have already amassed a bone-crunching 45 yellow and two red cards this season in just 22 matches in all competitions, and in terms of their most prolific individual offender, midfielder Saul Niguez ranks right up there.

The highly-regarded 25-year old has already been carded five times for Atletico this season, and with Los Colchoneros certain to be at the peak of their aggressive powers in Turin against Juventus this week, we think Niguez is a prime candidate to be cautioned again.

Looking for more Juventus vs Atletico Madrid predictions and betting tips? Check out our comprehensive match preview for the game.

Shakhtar Donetsk must be sick to the back teeth of facing Premier League champions Manchester City.

The Citizens turned the Ukrainians over three times inside the space of the last 13 months, running up a huge aggregate score of 12-0 in the process, and Pep Guardiola’s charges will expect to run roughshod over Shakhtar again this week.

Prolific wide attacker Raheem Sterling will be lurking with intent to finish off any openings City create on Tuesday. The 24-year old offers a consistent goal-threat in every game he plays, and Sterling has averaged 3.1 and 3.3 shots per Premier and Champions League game respectively this term.

The England international is priced generously to maintain his healthy attempts output against an ordinary looking Shakhtar Donetsk side on Tuesday.

You can find more Manchester City vs Shakhtar Donetsk betting tips in our expert’s match preview.

Real Madrid manager Zinedine Zidane was open and effusive with his praise of his compatriot Kylian Mbappe this week ahead of Los Blancos’ Group A meeting with PSG in the Spanish capital.

Zidane’s comments helped to fuel the belief that Mbappe will pull on the white shirt of Real Madrid in the near future, and the 20-year old wonderkid has a chance to showcase his skills for his suitors this week.

Mbappe returned from injury in typically explosive fashion last month by scoring seven times in just six games for PSG since his comeback, and having missed his club’s emphatic 3-0 win over Real in Paris on September 18th, we’re backing the World Cup winner to make up for lost time by registering in Madrid on Tuesday.

Check out the rest of our Real Madrid vs PSG predictions and betting tips in our analyst’s detailed match preview.

Pacey attacker Serge Gnabry has become something of an away day goalscoring expert for Bayern Munich this season.

The 24-year old has scored nine times in total for the Bavarians across three separate competitions since the summer, and Gnabry rattled home eight of those goals in matches away from the Allianz Arena.

Gnabry’s Bayern Munich will expect to run out comfortable winners this week when they meet Red Star Belgrade in Serbia, and the former Arsenal youngster is well worth considering to get himself among the goals again.

Alongside his super record of scoring in away games, Gnabry comes into Tuesday’s contest buoyed by a run of four goals in two games, including a stunning hattrick for Germany in their rout of Northern Ireland.

If Saturday’s performance against West Ham is anything to go by, Tottenham’s Dele Alli is going to enjoy life under new boss Jose Mourinho.

The 23-year old’s form had stuttered and spluttered under the recently axed Mauricio Pochettino, but Alli produced his best display of the campaign so far in Mourinho’s first game in charge on Saturday.

The England international was influential throughout against the Irons, and Alli bagged his first Premier League assist of the season on 36 minutes, setting up Son Heung-Min for the deadlock breaking goal.

Spurs will expect to pick up where they left off against Olympiakos this week, and a reenergised Alli looks well worth backing to notch another assist at the prices quoted.

Find out how our expert’s think Tuesday’s game will go by reading their Tottenham Hotpsur vs Olympiakos predictions and match preview.

A five-fold accumulator featuring our player special selections above is available at huge 96/1 odds with bet365!

Check out the latest and best Champions League offers and specials in our FREE BETS section here!