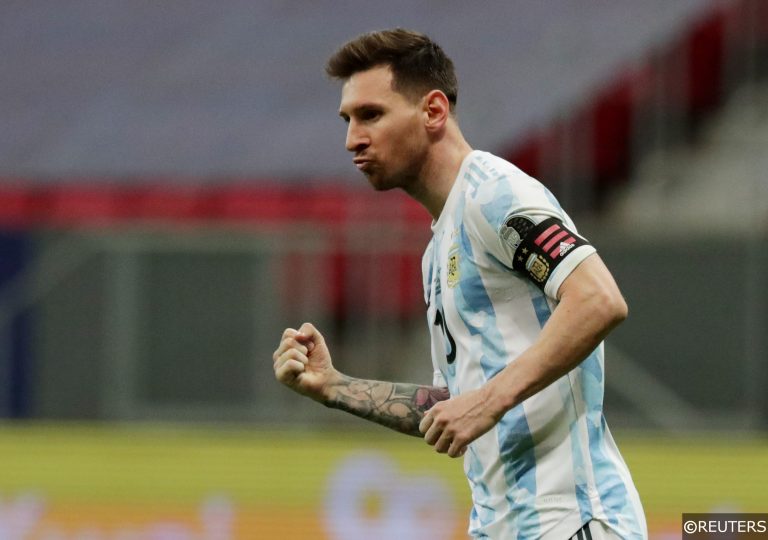 Before England try to take the crown in the Euro 2020 final on Sunday night, there’s an old rivalry in the Copa America final. Brazil and Argentina lock horns again, as the holders and hosts try to deny Lionel Messi’s probably final shot at an international trophy.

Ahead of Saturday night’s big game, we’re taking a look at all the key battles and markets to consider. We’ve also got a bet builder tip for this clash which comes in at 122/1! Don’t forget to head over to our bet builder page for more tips, including our pick for the big clash at Wembley.

The Barcelona man clearly wants another big prize before he retires, with his chase for the Champions League allegedly fuelling last summer’s dalliance with Man City. Barca seem to be selling him on a rebuild, but he doesn’t have as much time to wait on his national side.

While Messi will likely hang around long enough to take part in Qatar ’22 in 18 months’ time, it’s hard to see Argentina winning it. This is his final shot at an international trophy, given that he’ll be 37 when the 2024 Copa America rolls around. Given that desperation, expect Messi to make the most of this chance. He’s a great option to score anytime.

Back: Messi to score anytime at 9/5

Neymar to step up for Brazil

While Argentina will look to Messi for inspiration, Neymar will continue his pivotal role for Brazil this weekend. However, the PSG man has become more of a creator for his national side, having made three assists at this tournament. That suggests this won’t be the titanic battle between the two superstars that many want, as Neymar is likely to help boost those around him.

That’s not a trait we know Neymar for, but he’s been delivering of late. The PSG man has made an assist in five of his last seven appearances for Brazil, so we’re backing him to do the same again in the final.

Back: Neymar to make an assist at 4/1

Brazil are the favourites for this game, but they’ll have to watch out for Argentina’s great record early on in games. The Argentines have led at half-time in all of their matches at this tournament, which is an incredible run that Brazil need to watch out for.

Backing Argentina to lead at the break in this one looks like a great bet at 10/3, so we’re adding that into our bet builder tip as a big boost to the price. Brazil have been far from free-flowing so far and kicking-off a final at home against your great rivals in an empty stadium could see them make the kind of sluggish start that Argentina can prey on.

Back: Argentina half-time lead at 10/3

Brazil to lift the trophy

We backed Brazil as our outright winner tip in this competition before it kicked off and little has changed on that front. While Argentina have an obvious threat going forward, this Brazilian side are by some distance the strongest in South America.

Brazil have won five of their last nine Copa America finals, while Argentina have lost four of the last six finals of this competition. That has seen Messi’s hopes of an international trophy go unfulfilled, something we’re backing to continue with Brazil to win the trophy the final pick in our fourfold.

Back: Brazil to lift the trophy at 4/7

5 Players who could move after Euro 2020