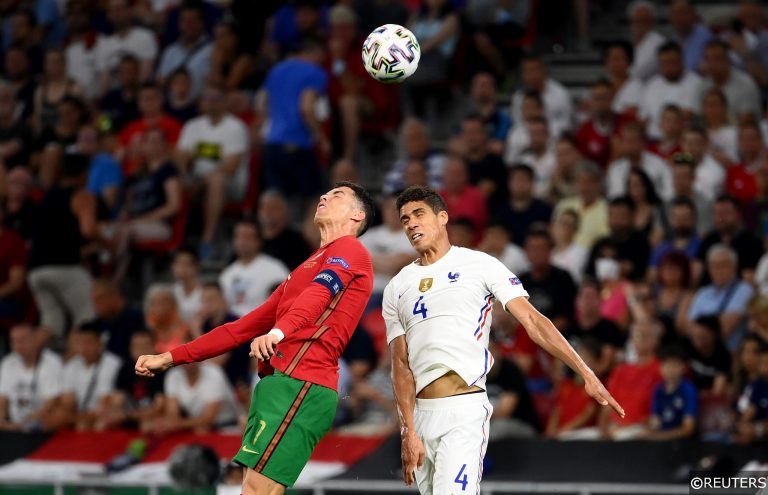 It’s just over two weeks until the start of the 2021/22 Premier League campaign and I don’t think anyone will argue when I say it’s been an abnormally quiet transfer window so far.

That’s hardly a surprise, though. Euro 2020 only ended a couple of weeks ago and most of the players from that are still on holiday, while the ongoing pandemic has had a major impact on football clubs’ finances. All being said and done, we could be in for the smallest-spending transfer window in recent memory.

Except for one club, that is.

Manchester United wrapped up one of the biggest transfers in Premier League history as they shelled out £73 million for England starlet Jadon Sancho and the capture of Real Madrid defender Raphael Varane is all but confirmed.

These are without a doubt the two most significant moves in the Premier League so far this summer, but is it enough to turn Manchester United into genuine title contenders?

The story of last season

The gap to Manchester City last season was 12 points. That’s enough of a gulf as it is, but it’s not just their increasingly noisy neighbours Ole Gunnar Solskjaer has to worry about. They actually finished fourth in expected points and, despite a lack of transfer activity at Anfield and Stamford Bridge, there’s a lot to suggest both will improve this season.

Liverpool were fortunate with injuries in their title-winning campaign but they were repaid in spades last year and another injury crisis on that scale is unlikely to happen again. Chelsea’s squad is packed full of talent and Thomas Tuchel managed to turn them into Champions League winners after taking over from the sacked Frank Lampard.

That’s a long way of saying that there is a lot of competition and even the arrival of two genuinely world-class players isn’t enough to guarantee even a silver medal. In fact, Manchester United are a longer shot than Manchester City, Chelsea and Liverpool in the Premier League outright market.

What are Manchester United getting in Sancho and Varane?

The short answer to that question is bags of talent and heaps of winning experience respectively.

Sancho has scored 38 goals and assisted 45 more in his 104 Bundesliga appearances for Borussia Dortmund but his end product – as phenomenal as it is – doesn’t tell the whole story.

His dynamic style of play and speed makes him a perfect fit at Manchester United, too, not to mention the fact that he solves their long-standing problem on the right wing and will do so for many years to come.

It’s not just his speed that makes him deadly, either. He has the technical ability to unlock the low-block defences that gave Solskjaer’s side such a headache last season. That should help ease the creative burden on Bruno Fernandes, who has all too often looked an exhausted husk after carrying the entire team on his shoulders.

And what about Varane? Well, the fact Patrice Evra has compared him to Rio Ferdinand says it all.

In Raphael Varane Manchester United are getting an elite centre back in his prime, and for a bargain price to boot. He has a trophy cabinet that would put almost every player in the Premier League to shame. A World Cup, four Champions League titles, three La Liga titles and a Copa del Rey.

That winning mentality is something that cannot be taken for granted and after spending almost a decade training against Cristiano Ronaldo he will certainly have a few ideas on how to deal with world-class attackers.

Varane represents an upgrade on Victor Lindelof in almost every department, and Lindelof is by no means a bad player. The often-maligned Swede is good on the ball and his positioning is excellent but his lack of physical presence has caused his side problems over the last couple of years. Varane may need some time to adapt to the Premier League but he’s fast, tactically astute, excellent on the ball and good in the air.

But is it enough?

That may come as a surprise after reading me wax lyrical about the new arrivals for 600 words but there is still a gaping hole in defensive midfield that needs filling and the top trio of challengers just look too strong.

Manchester City have lost Eric Garcia and Sergio Aguero and are yet to make any signings – no, the free transfer of Scott Carson doesn’t count – but all reports suggest they will be making a blockbuster move in the coming weeks. The arrival of Jack Grealish and/or Harry Kane would turn them from 4/6 favourites to 1/2 favourites in my eyes. Kane in particular would be a game-changing transfer that could lead to the sort of domination we saw in 2017/18.

Chelsea are also yet to make any signings but Thomas Tuchel’s arrival in January was enough to turn them into Champions League winners. They have only lost four games under the German and they have as talented a squad as any team. If Kai Havertz continues to improve and Tuchel can get Timo Werner firing (or capture Erling Haaland) they have a real chance of taking the title back to London for the first time since 2017.

Liverpool are a tricky one. A late surge up the table saw them clinch third despite a cataclysmic injury crisis at the back earlier in the season. The signing of Ibrahima Konate offers them some much-needed depth in defence and the return of Virgil van Dijk cannot be overstated. But they have lost Gini Wijnaldum and unless they find a top-tier replacement that could be a problem, plus they will lose Mo Salah and Sadio Mane to the African Cup of Nations in January.

My early prediction? Man City to win it ahead of Chelsea and Man Utd and Liverpool to battle it out for third.