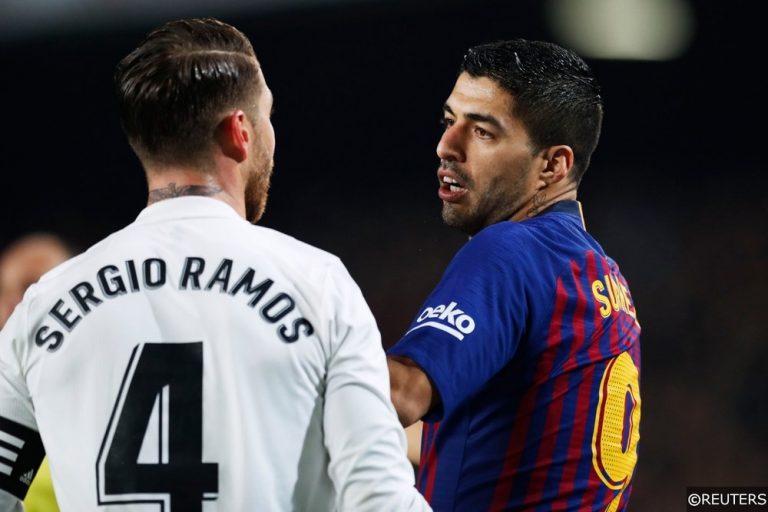 While there was a spell when Pep Guardiola’s Barcelona would simply pass Real Madrid into submission, in recent years the outcome of El Clásico has increasingly been determined by individual pieces of brilliance. Therefore key battles across the pitch are a big factor in determining the outcome of meetings between the two giants of Spanish football.

They meet twice this week, both times at the Santiago Bernabeu. The first meeting is arguably the biggest as Barcelona travel to Madrid for the Copa del Rey Semi-Final 2nd Leg with the score level at 1-1 from the 1st Leg. The sides then meet again on Saturday in La Liga with Los Blancos looking to get some kind of foothold back in the title race although even if they win the fixture, they will still be 6 points back.

These are some of the key battles to look out for this week as these two sides face off twice. 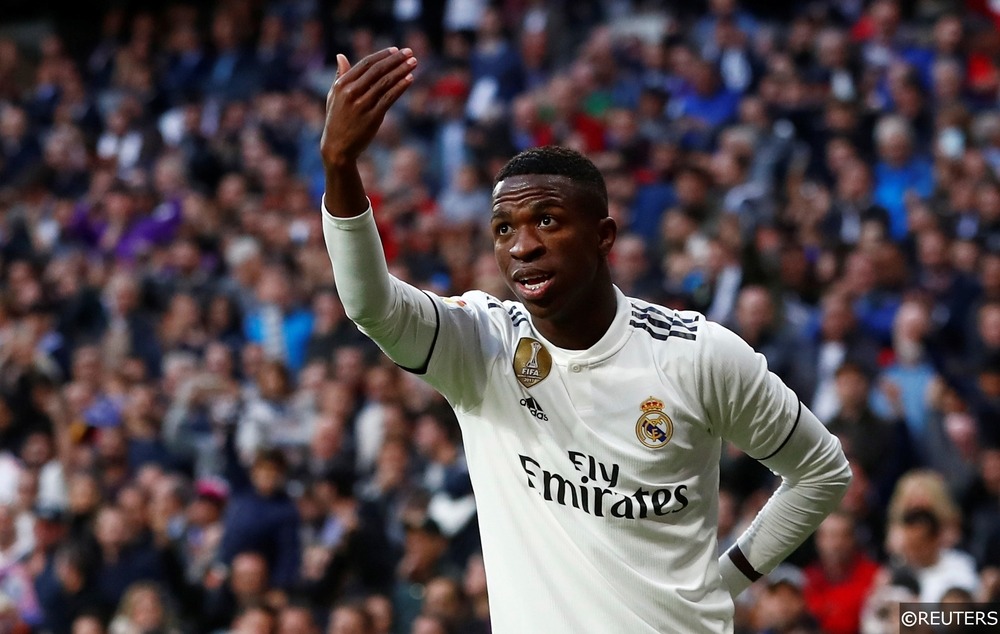 Despite being away, Barcelona are still the slight favourites to win both matches with the bookies. However there are a few areas where Real Madrid will think they could have the advantage. Brazilian teenager Vinicius has quickly become a key player for Los Blancos since his rise into the first-team. While his finishing still leaves something to be desired, his pace and ability on the ball is frightening and in a one-on-one situation he should have the beating of Barcelona right-back Sergi Roberto, who is by no means a natural athlete.

It is possible that Barca will go with Nelson Semedo for at least one of the two matches as the right-back position is one of the most contested in the side right now. In truth the Catalans have never fully replaced the explosive Dani Alves and while both Sergi Roberto and Semedo have impressed at times, if there is a weakness in this Barcelona side, it is arguably in the right-back role.

Whoever Ernesto Valverde opts for, you can be sure that Real Madrid will look to get the ball out to Vinicius whenever the opportunity presents itself. It could be their best shot at really hurting this Barcelona side in a week when the Brazilian has another chance to further underline his quality, having outshone many of his more senior teammates since breaking into the side.

Real Madrid look set to go with Sergio Reguilon at left-back after another shaky defensive performance from Marcelo in the 1st Leg. 22 year old Reguilon has barely put a foot wrong since breaking into the side. He is seen as a more defensive option than the Brazilian but has shown flashes of quality going forward too. Real Madrid have won all nine league games this season in which Reguilon has started so he has certainly been a lucky omen but in direct opposition to Leo Messi, he is set for the biggest tests of his young career.

Messi isn’t a traditional winger in that he tends to drift inside so it won’t merely be down to Reguilon to stop him but it will be fascinating to see how the youngster copes with the brilliance of the Argentine. Barcelona’s talisman hit another fine hat-trick at Sevilla in La Liga at the weekend, returning to form after a few more subdued performances when he didn’t look 100% fit. He is the record goalscorer in the history of El Clasico and if Real Madrid are going to win either of these matches, they are going to have to find some way to at least limit his influence.

In the midfield, Luka Modric is still the key man for Real Madrid and he has looked much sharper since the turn of the year. The Croatian has put in a few displays more befitting of the Ballon d’Or winner which he is, with some driving runs from midfield complimenting his always exceptional passing game.

Barcelona look likely to go with Arturo Vidal in midfield given Arthur is still carrying a knock while Carles Alena may not be trusted just yet in such key games. Vidal is not a typical Barcelona midfielder by any means but he does give them a physical presence and even a touch of nastiness in the middle of the park, something they’ve lacked in recent years. He may be given the task of pressing Modric here and if he can prevent the Real Madrid man from getting much time on the ball, Barcelona’s chances of victory will certainly increase. 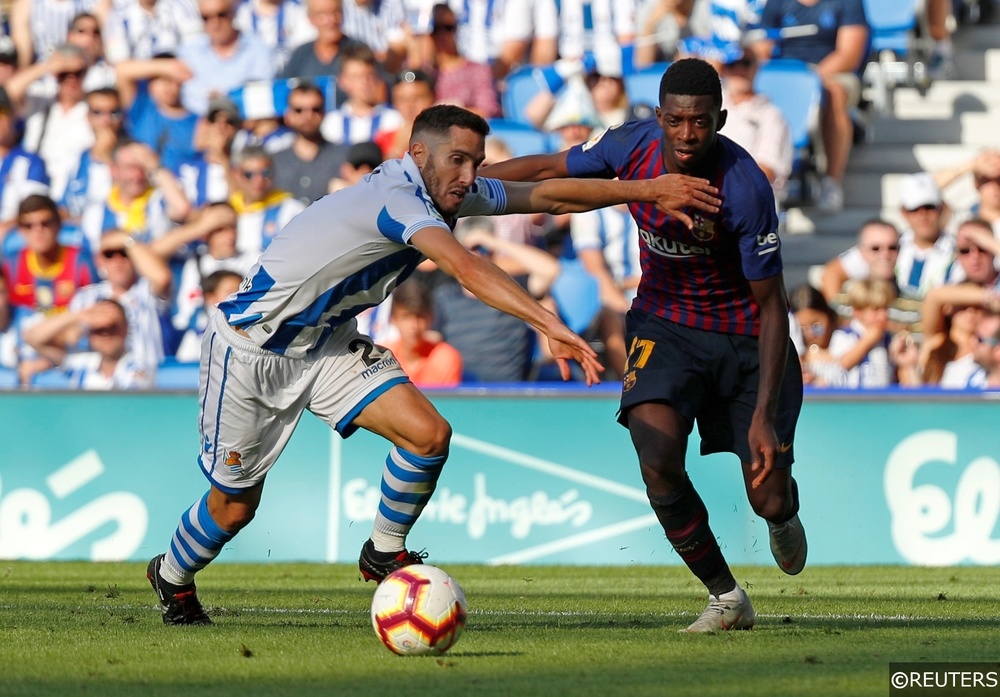 Similarly to the potential battle between Vinicius and the Barcelona right-back, Ousmane Dembele will be looking to use his pace to get the better of Dani Carvajal. Despite some off the pitch problems and intense media scrutiny, Dembele has turned out to be one of the biggest positives for Barcelona this season.

He has won the battle to be the preferred choice on the left with Philippe Coutinho struggling for form and Malcom never really winning the trust of Valverde, despite a goal in the 1st Leg of the Copa del Rey clasico. Dembele has delivered at some vital moments for Barcelona this season, scoring several key late goals to salvage draws or victories on the road. Were it not for Dembele, the league title race would be a much tighter one.

Carvajal will have to be at his best to thwart the Frenchman. The presence of Dembele, may also make the Spanish full-back more reluctant to push forward as with the 21 year old in the side, Barcelona are a far more potent threat on the break. It’s certainly one of the key battles to look out for over the coming week of Clásico action. 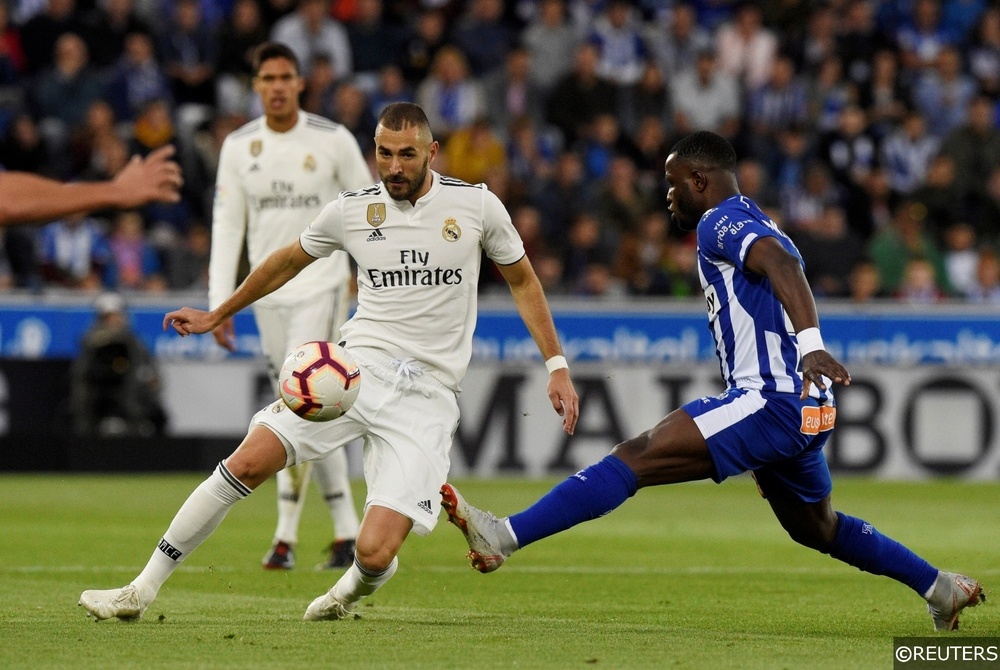 Barcelona brought Samuel Umtiti back into the side at the weekend against Sevilla. The Frenchman was arguably the best centre-back in Spain last season but has been plagued by a lingering injury this term. Ernesto Valverde has insisted he is fully fit now which suggests he will start at least one of these two clasico encounters.

However he didn’t look fully up to match sharpness in Seville and that has to be a slight worry for the visitors heading into these fixtures. He will be up against compatriot Karim Benzema who has been one of the form players in La Liga since the turn of the year with some outstanding displays. Significantly Benzema has also been more clinical in front of goal and he could be capable of exploiting Umtiti’s lack of match sharpness.