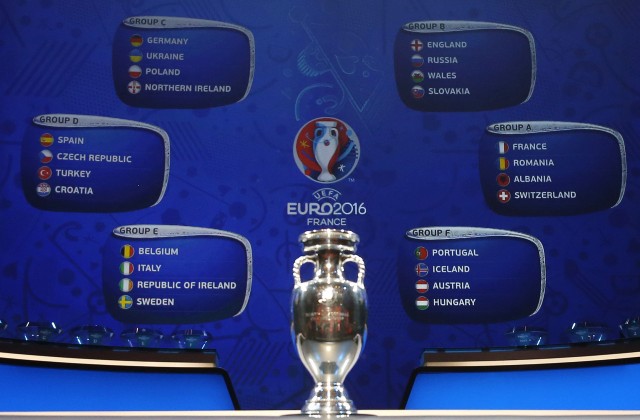 England will be happy with their Group B draw of Russia, Wales and Slovakia. They are 12/1 to win the tournament outright and 11/10 favourites to win Group B. The England Invincibles won all of their qualifying games and will be looking forward to facing rivals Wales in the biggest game of the group. Russia slipped up against Moldova (1-1) and Austria (0-1) in qualifying so Roy Hodgson’s men will be confident heading into their opening game encounter on 11th June.

Wales fans will be hoping their side can complete the Rugby and Football double over England. I can imagine there may be a few sickies being pulled on Friday 17th June if the Welsh do the business against their biggest rivals on Thursday afternoon. If Gareth Bale and Aaron Ramsey are fit they will fancy themselves against any of their Group B opponents. At 4/6 with Coral to qualify from Group B I wouldn’t put anybody off backing them to get out the group.

Republic of Ireland have been drawn in the group of death with Belgium, Sweden and Italy. It’s going to be a tough time for the Irish but they’re used to being underdogs. They’ll have a big set of supporters there who will be well up for creating an atmosphere against the bigger nations. Martin O’Neill and Roy Keane will have the players fired up and I wouldn’t be shocked if the Irish could pull off an upset victory against any side. Let’s not forget they managed to take 4 points off Germany in qualifying including a famous 1-0 victory at the Aviva Stadium.

Northern Ireland are the biggest outsiders of the tournament at 500/1, but who would have thought they’d be at the finals in France. They have a genuine goal threat in Kyle Lafferty who will relish the chance to prove himself on the big stage in France. The Green and White Army will support their lads and who knows, we could be in for more upsets come the summer of 2016.

The biggest fixture for both sets of supporters in the last five years will be the game on Thursday 16th June at the Stade Bollaert-Delelis. They’ve faced each other nine times since 1966 and England have not lost once; winning 8 and drawing 1. However the Welsh will see this as a real opportunity to beat England with a golden generation of players including as Gareth Bale, Aaron Ramsey and Ashley Williams.

England have opened up as the 5/6 favourite, while Wales are 10/3 and the draw is 5/2. The early prices might seem like a bit of value for England but the bookmakers are obviously aware that Gareth Bale could probably win this game on his own. This should be an absolute cracker and both sets of fans will want to win no matter what! We’ll have a betting preview of the game up closer to kick off.

As with every major tournament there’s always a group of death and this year it’s Group E involving Belgium, Italy, Sweden and Republic of Ireland. Belgium are currently the number one ranked side in the world while Italy are a notoriously good tournament footballing side and have a whole host of experience. Sweden have one of the best strikers in the world in Zlatan Ibrahimovic who is capable of winning matches single-handedly and scored his 19th career European qualifier goal when earning them a draw against Denmark in their second leg playoff in November. Finally, the Republic of Ireland are a hard working, well coached side and Martin O’Neill’s men have already beaten World Cup champions Germany this year.

According to research done by Sebastin Wolsing being in group E gives you a 28% less chance of winning the tournament. Not only is it the “Group of Death” but once you get out of the group you face the toughest path to the final! The document shows the following summary of the knock out stages:

2. The runners-up of groups A, B, C and F will play other runners-up, however if you finish second in groups D and E you will face group winners.

With that in mind let’s take a look at the odds from Bet365 for Group E teams to go on and win the tournament.

Here’s a complete list of the outright winner odds from Betfair.

We will have pre-tournament Euro 2016 betting tips online when the Premier League seasons finishes with tips, betting previews and predictions for every game at Euro 2016.