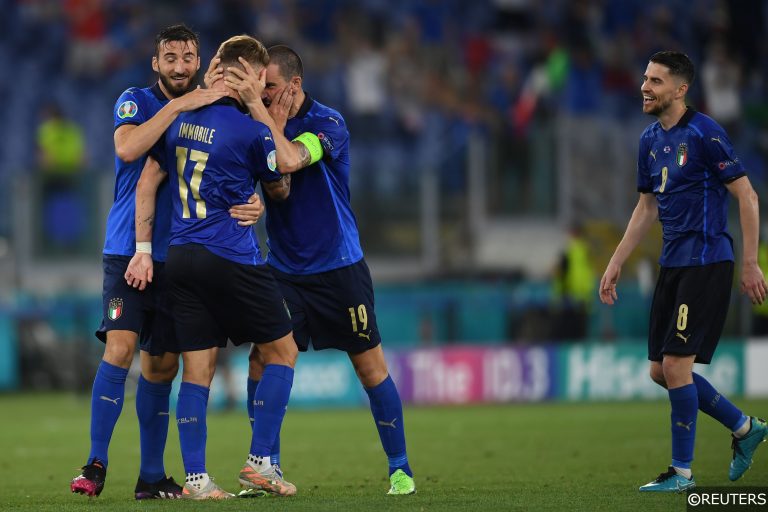 We’ve had a couple of days to let our heart rate return to normal after Wednesday’s incredible scenes but we’re thrust back into the maelstrom of football on Saturday as the Euro 2020 Round of 16 gets underway.

The experts from FST and Racing Post haven’t been slacking during this downtime, however. We’ve been hard at work scouring the markets to bring you our very best value bets now that we’ve seen every team in action three times.

Our pre-tournament Experts’ Best Bets have already enjoyed a couple winners, with myself landing a 7/4 shot for a Belgium, Denmark Group B forecast and James Milton landing his thanks to Italy winning Group A.

France over 1.5 team goals vs Switzerland at 4/5

France scored twice against Portugal in their last game and their impressing attacking line up can cause problems for the Swiss. The underdogs failed to keep a clean sheet against Wales, they shipped three to Italy and they were the only side to concede to Turkey in the group.

The French should prove too strong for a Swiss side who look vulnerable. The French scored twice in three of their four knockout games at the 2018 World Cup and they scored twice in every Euro 2016 knockout game on route to the final. Deschamps should let his side push forward more against the Swiss so they’re a good bet to score twice.

Italy’s odds in the outright market have been slashed after a dominant Group Stage display and that comes as no surprise. They never looked under threat against Turkey, Switzerland and Wales and their trio of wins to nil made it 11 victories in a row without conceding.

This isn’t just blind luck, either. The Azzurri have conceded the fewest xG (1.0) of any team in the tournament and have shipped just seven goals in their 30-game unbeaten streak, with five of those coming all the way back in 2019.

Austria may have won two of their three group games but they came against poor opposition and even then they mustered just 11 shots on target in total. Only one of those came in their only real test so far – a 2-0 defeat to the Netherlands – and they have generated just 3.2 xG so far in Euro 2020.

For me, Italy are the side that have most lived up to the pre-Euro 2020 hype. Relative outsiders at 11/1 going into the tournament, three impressive and successive wins to nil against Wales, Switzerland and Turkey have cemented them among the tournament favourites at around 6/1.

Roberto Mancini’s side are on the tougher side of the knockout bracket but have one of the more favourable Round of 16 draws and have shown enough quality at both ends of the pitch to challenge sides like Belgium or Portugal and France on their way to the final.

On the other side of the bracket, Netherlands, Germany and England are the sides fancied to meet them there, with murmurs about dark horses Denmark also being in contention. Germany are, however, the side that have put in the most promising performances relative to the competition faced… and we all know the pedigree they have in tournament formats under manager Joachim Low.

The route to the final favours the Germans should they beat an uninspiring England side on Tuesday, so a price of around 25/1 for them to get there but fall at the last hurdle to Italy looks too good to turn down.

Five of the top seven nations in the FIFA world rankings have landed in the top half of the Euro 2020 draw and that could open the door for Netherlands to reach the final.

The Dutch have England and Germany to worry about in the bottom half, but those two heavyweights lock horns in the round of 16 and neither have been convincing.

Frank de Boer’s side have flown under the radar despite topping their group with maximum points and in Memphis Depay and Gini Wijnaldum, who have netted five of their eight tournament goals, they have two world-class operators performing at the top of their game.

The Dutch can see off Czech Republic before outclassing Wales or Denmark in the last eight. England or Germany may wait in the semi-finals, but at 7-2 they look like a cracking bet to make the final.

Portugal to win vs Belgium at 2/1

Portugal triumphed at Euro 2016 despite failing to win a single group stage fixture and they can recover from a third place finish in Group F by defeating Belgium in Seville.

The Iberians struggled in their 4-2 loss to Germany but looked a lot better when drawing 2-2 with France on Wednesday.

They are spearheaded by one of the all-time greats, Cristiano Ronaldo, and can expose the Belgians, who were not seriously tested on their way to winning Group B.

Netherlands have enjoyed a kind draw at Euro 2020, beating Ukraine, Austria and North Macedonia in Group C, and they are favourites to beat the Czechs, the lowest-ranked team left in the tournament.

There was a lot to like about the Dutch attacking performances in the group stage, where they scored eight times in three games, but their defence was far less impressive.

They conceded twice against Ukraine while North Macedonia hit the woodwork and had two ‘goals’ chalked off for tight offside calls so an entertaining clash is expected in Budapest.

Georginio Wijnaldum to score anytime vs Czech Republic at 13/5

Georginio Wijnaldum bagged eight goals in qualifying for the Netherlands so his haul of three at Euro 2020 so far shouldn’t come as too much of a surprise.

The PSG man has had 10 attempts on goal in the tournament, only one less than team mate Memphis Depay, thanks in large part to his excellently timed runs into the box.

In a Dutch side creating plenty of chances, Wijnaldum can add to his haul against the Czech Republic.

Euro 2020 outright predictions update for the Round of 16