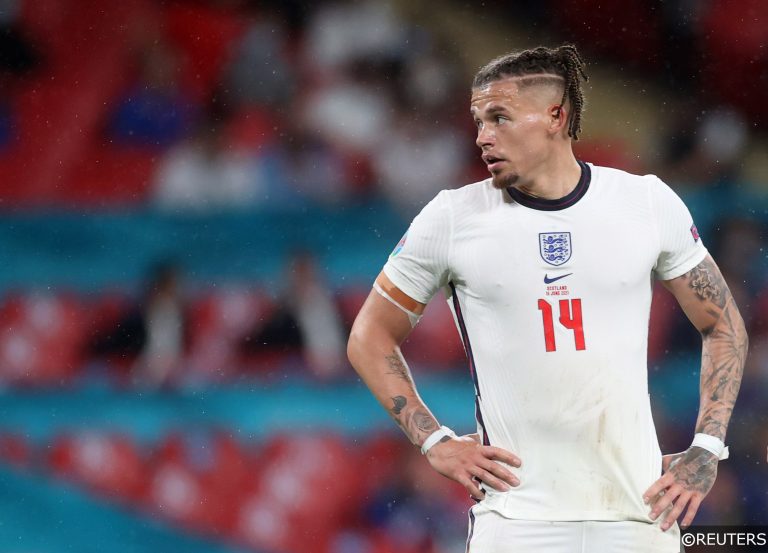 Has everybody managed to catch their breath after Wednesday evening’s chaotic end to the Euro 2020 Group Stage? Good, because we go again on Saturday and this is when the real fun begins.

After spending two weeks whittling 24 teams down to 16 we’ll see the field cut in half in just four days as the thrill of knockout football returns.

Before we dive in to all our bitesize Round of 16 predictions, make sure to check out our Euro 2020 outright predictions update here.

Just like 2016, Wales have performed well above expectations to make it this far and while they might not have enough to get past Denmark they should be able to trouble the favourites in front of goal. Their attacking display against Turkey was excellent and they have scored in seven of their last ten matches.

Denmark have conceded in all three of their Euro 2020 games so far but they were ruthless in attack against Russia and only Netherlands have generated more xG than the Danes this tournament. Expect goals at both ends in Amsterdam.

Italy have been the standout side of the tournament so far, winning all three of their Group Stage games and keeping a clean sheet throughout. In fact, they have won each of their last 11 games to nil and it’s hard to see them faltering against Austria.

The underdogs have failed to score in four of their last six games and while they did manage to beat North Macedonia and Ukraine in their group games they looked very poor against Netherlands. They can’t cut it against the big opposition and in my opinion this is where their tournament ends.

Barring a dodgy ten minutes in their Euro 2020 opener against Ukraine, Netherlands have looked much better than expected so far this summer. They won all three of their group games and scored an impressive eight goals in the process, generating more xG than any other side at the tournament.

Czech Republic have certainly performed better than most people expected but they offered very little going forward against England and they’re unlikely to trouble the Dutch in Budapest.

Belgium may have won all their group games but matchday two against Denmark was a real eye-opener. Defensively they were atrocious and if it weren’t for Kevin De Bruyne’s brilliance and some wasteful Danish shooting they would have lost that game. Their back three is a real concern and they’re coming up against Cristiano Ronaldo on Sunday.

Portugal have scored seven goals so far despite competing in the tough Group F, but just like Belgium they have looked more than a little shaky at the back. They shipped two to France and four to a Germany side who utilise a similar system to Belgium. The German wing-backs terrorised the Portuguese defence and we can expect similar from Thomas Meunier and Thorgan Hazard. This could be one of the most entertaining ties of this round of fixtures.

Spain finally sparked into life against Slovakia with a five star performance and, while I’m still dubious about their staying power, they should have enough about them to beat Croatia.

Croatia looked like their old selves against Scotland on Tuesday but their meek performances against England and Czech Republic show they’re a declining force. They have lost half their last dozen games and I fancy Spain to break down a defence that has conceded in ten of these 12 matches.

Switzerland have never made it past the Round of 16 in the European Championships and that unwanted record looks set to continue in Euro 2020. They were comfortably beaten by Italy in matchday two and on Monday they come up against the most talented team in the tournament.

France may have limped through their final two group games but they still look like they have plenty left in the tank and with seven wins from their last ten it’s hard to imagine them slipping up in Bucharest.

This is the big one. Two arch rivals collide at Wembley in a major tournament and while Germany had traditionally held the advantage things might be a little different this time around. England may have been maligned for their lack of goals but defensively they have looked solid so far and they’re coming up against a Germany side that is a shadow of its former self.

Joachim Low will leave the managerial post after this tournament but his final swansong isn’t looking too optimistic so far. They were poor against France in their opener and, while they did manage to maul the Portuguese defence, they were just six minutes away from being eliminated by Hungary on Wednesday. Die Mannschaft have only won four of their last nine and England are unbeaten in their last nine.

Ukraine were touted as dark horses in the build up to Euro 2020 but they haven’t really lived up to the billing so far. Yes, they did score twice against Netherlands and beat North Macedonia but their overall performance against the Dutch was poor and they were even worse in their defeat to Austria on Monday.

Sweden, on the other hand, held Spain to a goalless draw before beating Slovakia and winning against Poland in dramatic fashion. The Swedes have won seven of their last eight games and should be able to edge past Ukraine at Hampden Park.

Euro 2020 outright tips update for the Round of 16