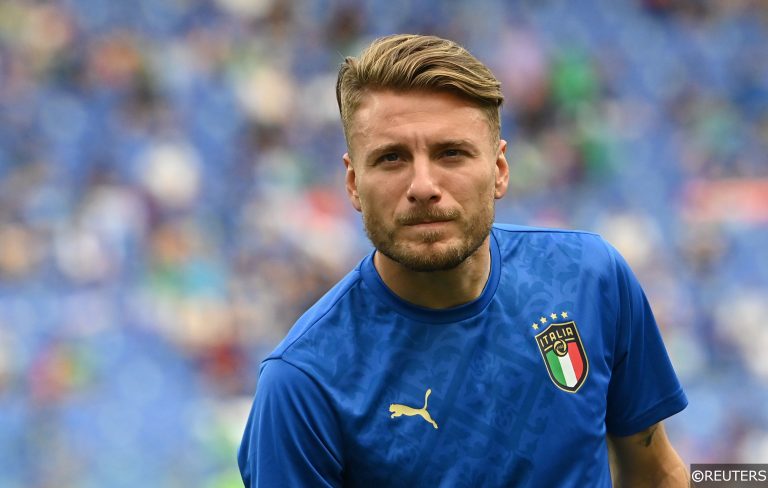 The Euro 2020 semi-finals are upon us and on Tuesday night the first finalist to take to the field at Wembley on Sunday will be confirmed.

With two huge matches coming up at Wembley I’ve been delving into all the stats to provide you with our ultimate Bet Builder guide to the semi-finals. Watch out for the England vs Denmark one on Tuesday, too!

England look to be peaking at the right time after battling through the group stages.  The Three Lions secured a deserved 2-0 win over Germany in the last 16 and then thrashed Ukraine 4-0 without really having to get out of first gear.  The Danes have also improved as the tournament has progressed and did manage a win over England at Wembley in the Nations League last year, but we expect Gareth Southgate’s men to take their revenge on Wednesday.

An anytime goal from Harry Kane may not be the most ambitious selection, but the frontman has found his form and with three goals in his last two games is now right back in the mix for Golden Boot honours.  Kane has rediscovered his poacher’s instinct after a sluggish start to Euro 2020 and can make the most of any chances that do come his way on Wednesday.

Luke Shaw has three assists to his name so far and has been a crucial attacking outlet for England down the left flank.  The Manchester United full-back has been taking set-pieces and has created more chances than any other England player at Euro 2020 so he looks a strong option to weigh in with an assist.

Goals & both teams to score markets

England are yet to concede in five Euro 2020 games and going back further they have conceded just once in their last 11 fixtures.  Denmark did put four past Wales in their first knockout game and scored twice against the Czechs in the last round but England’s success has been built on a mean defence and they can maintain their run of clean sheets on Wednesday.

Denmark midfielder Thomas Delaney was a surprise goalscorer in the win over the Czech Republic.  The Borussia Dortmund man may not be able to repeat that feat against England but he looks excellent value to register one on target.  Delany is averaging 1.4 shots-per-game at Euro 2020 and will occasionally try his luck from range.  The 29-year-old is also averaging 3.0 aerial duels won per-game in the tournament and has looked a threat from set-pieces.

Best bet: Thomas Delaney one or more shot on target at 7/2

There aren’t too many standout candidates in either squad for a booking based on Euro 2020 so far but at a big price England midfielder Rice is an option.  The Three Lions could opt to line up with a three-man defence against the Danes and if so Rice’s work in a holding role could see him booked, as was the case in the last 16 win over Germany.

Best bet: Declan Rice to be booked at 7/2

England have only had to defend five corners once in a match at Euro 2020, during the goalless draw with Scotland in the group stages, but Denmark may be able to force over 4.5 on Wednesday.  The Danes are averaging seven corners a game in the tournament and have only won less than five in one of their matches.

Italy have won four of their five matches at Euro 2020 inside 90 minutes and they take on a Spain outfit who have needed extra time in both of their knockout matches so far.  The Azzurri have 12 wins in their last 13 matches in a run stretching back to November of last year, and dominated a strong Belgium team in the previous round.

Lazio striker Ciro Immobile managed a goal in each of his first two games of the tournament but after being an unused substitute in the dead rubber against Wales he has failed to add to his tally in the knockout rounds.  However, the forward is still getting chances and had three shots against both Austria and Belgium, with four of those attempts blocked, and as the focal point in a strong Italian attack he should get a few opportunities against La Roja on Tuesday.

Spain midfielder Dani Olmo has two assists in four appearances at Euro 2020, with two starts, and is likely to retain his starting spot after a solid showing against the Swiss in the previous round.  The 23-year-old had an excellent record for assists in the Bundesliga with RB Leipzig last season averaging almost one every three games (nine in 32 appearances) and has proven to be one of the driving creative forces in an otherwise fairly lacklustre Spanish team.

Goals & both teams to score markets

Italy went into Euro 2020 on the back of eight successive clean sheets.  They managed to stretch that out to 11 shut-outs, but have conceded in both of their knockout ties so far.  Admittedly, Spain forwards Alvaro Morata and Gerard Moreno have perhaps underwhelmed so far but Luis Enrique’s men do have the highest xG of any team in the tournament and they have a few players in midfield who can weigh in with goals. Both teams to score appeals, but at a bigger price we’ve opted for over 2.5 goals as there have been over 2.5 goals scored in three of Italy’s games so far and in two of Spain’s last three games.

Italy are averaging more shots per-game than any other team at Euro 2020 with 20.2 but Spain aren’t far behind in second place on 19.8.  Spain may not be converting as many chances as they should, and in each of their knockout games so far they’ve managed 10 on target.  Italy may be a big step up in class from what they have faced so far but at a big price there looks to be value in Enrique’s men having at least five on target.

Best bet: Spain to have five or more shots on target at 8/5

Spain have picked up just one yellow card since the group stages concluded and Italy have had four over their last two games.  This game is more likely to be a tactical battle than a full-blooded affair and as such we may not see too many bookings.  There have been under 3.5 cards in 90 minutes in all four of the knockout games involving one of these teams and that pattern may well continue on Tuesday.