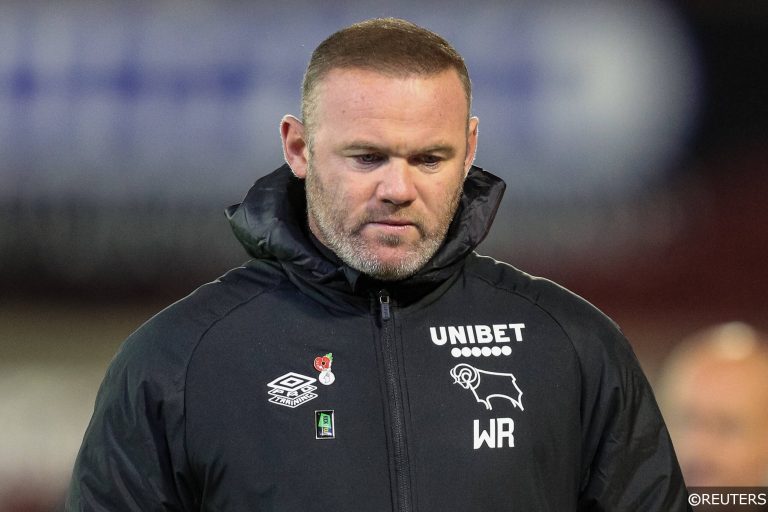 It’s safe to say that former Liverpool manager Rafa Benitez wasn’t the most popular of appointments as he was named Everton boss in June 2021 and now, just six months later, the Spaniard finds himself out of a job after leading the Toffees to just five wins from 19 Premier League games.

The ignominy of losing against against Norwich proved to be the final nail in Benitez’s coffin, but who could be in line to replace him at Goodison Park?

Wayne Rooney started the day as third-favourite to take charge at Everton but at the time of writing the current Derby manager is now a firm favourite at 6/4 to get the call, and it’s no surprise considering the job he’s doing at Derby.

The 36-year-old avoided relegation from the Championship by the skin of his teeth last season but this year was always going to be an uphill battle. Off-field circumstances placed Derby as firm favourites for the drop after they were deducted a massive 21 points and while relegation is still very much a likelihood nobody can argue that Rooney hasn’t done a stellar job.

The Rams are now off the foot of the table for the first time this season and sitting on 14 points after winning four of their last five league games. Were it not for the deducted points, Derby would be all the way up in tenth position and would have their sights set on a playoff charge.

As it stands, they are eight points adrift of safety and even if Rooney puts in a spectacular managerial performance the best Derby can hope for is to narrowly avoid the drop. He would certainly be willing to jump ship to Everton and, after two stints with the Toffees, he would have the fans on side from the beginning.

For me, it’s no surprise he’s the favourite and that’s where my money is going.

Ferguson, Lampard and Martinez also in the mix

Roberto Martinez has dropped to 6/1 after being 15/8 favourite on Tuesday morning and if I’m honest it was a surprise to see him so strongly linked with the job in the first place. His first spell at Goodison Park wasn’t exactly a wildly successful one and with the World Cup starting this year he was never likely to abandon his Belgium post unless a huge club came calling, not to mention the fact the Belgian FA were unwilling to release him.

Duncan Ferguson is second-favourite in the betting at 5/2 and while he is caretaker manager I don’t see him getting the job permanently. He has already had one successful but temporary spell in charge after Marco Silva’s sacking in 2019 and while he has since been serving as assistant manager there is no evidence the board are looking to appoint him as full-time manager.

Frank Lampard is another option, though, and at an attractive price of 5/1. Like Rooney, the former Chelsea midfielder enjoyed a successful spell in charge of Derby but has the added bonus of managerial experience in the top flight. His first year in charge of Chelsea was a successful one and while he was eventually sacked by the trigger-happy Roman Abramovich that 18 months of top-flight experience makes him an attractive option for the struggling Toffees.

Market pointers for Brighton vs Chelsea with 200/1 tip