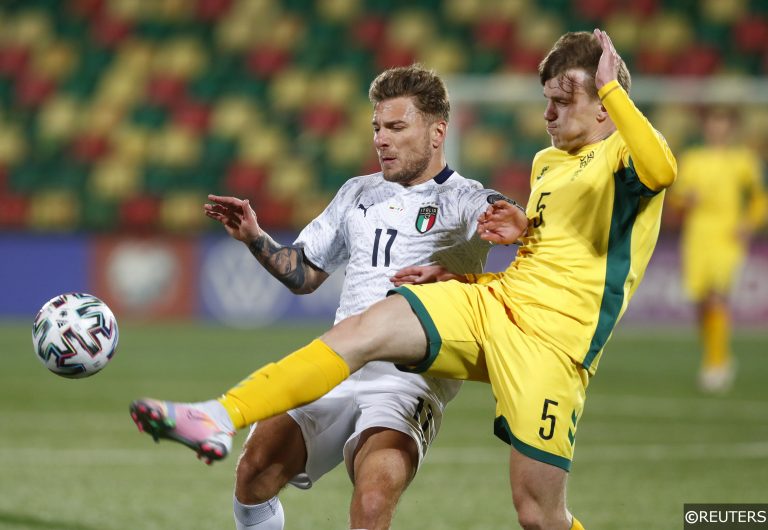 The domestic season may be over but with Euro 2020 kicking off on Friday FST have once again teamed up with a whole bunch of Racing Post tipsters to bring you a host of experts’ best bets for the tournament.

Take your pick and enjoy the tournament! And don’t forget to check out all our latest Euro 2020 predictions and betting tips.

Belgium racked up the most goals (18) at the last World Cup and Roberto Martinez is really getting the most out of them going forward. The Red Devils have scored over 80 goals across their last two completed qualifying campaigns, adding another 12 in their first three 2022 World Cup qualifiers.

Belgium were the leading scorers among the top tier of sides in the 2021/22 Nations League, hitting 16 goals in six matches. That includes six strikes against Denmark, their biggest rivals in Group B this summer. Russia conceded seven times against them in Euro 2020 qualifying and Finland are seen as rank outsiders, so Belgium have a chance to put on a show.

Belgium are justified favourites to land the top spot in Group B having won 19 of their last 23 matches. They have one of the most talented squads in world football and a relatively easy group to boot. It’s hard to see them failing to win Group B.

Denmark are a cut above Finland and Russia, though. They have lost just two of their last 28 matches and both of those came against Belgium, while main rivals Russia have gone backwards since their excellent World Cup showing on their own patch in 2018 and Finland are a real outside shot after qualifying for their first ever major tournament.

Ferran Torres, who has cemented his position in Luis Enrique’s starting XI thanks to some strong performances for club and country over the past 12 months, looks good value to be Spain’s top goalscorer at Euro 2020.

The 21-year old Manchester City forward has scored five times in his last four competitive outings for Spain, which included an unbelievable hat-trick during the memorable 6-0 demolition of Germany last November, and is behind only Alvaro Mortata (5/2) as favourite for the market.

Morata has just two in his last six on the international scene and three in his last nine across all competitions domestically.

North Macedonia have consistently punched above their weight in recent years and there’s plenty to like about their chances of reaching the knockout stages.

Fellow minnows Iceland and Northern Ireland snuck into the last-16 four years ago, and North Macedonia are arguably a better team than those two.

Having beaten Germany in March, games against group rivals Austria and Ukraine, both of who have been perennial underperformers at past Euros, should hold no fear for the Red Lynxes.

Italy failed to qualify for the 2018 World Cup and perhaps they have been overlooked for Euro 2020.

The vast majority of Roberto Mancini’s squad are based in their home nation, but Serie A is a stronger division than in recent years and the Azzurri have some talented players at their disposal.

Italy are housed in a soft group, they have a nice path to the later stages of the competition and they can outrun odds of 8/1.

The big boys in Spain are sniffing around Real Sociedad striker Alexander Isak and the 21-year-old can boost his profile even further by finishing Sweden’s top goalscorer.

Having struggled to make an impression at Borussia Dortmund, he netted 17 goals for the La Liga side last season and in the absence of veteran Zlatan Ibrahimovic, this could be the time for him to rise to the occasion.

The Azzurri won ten out of ten in Euro 2020 qualifying before starting their 2022 World Cup campaign with three straight 2-0 victories in March.

Roberto Mancini’s squad is packed with talented midfielders and, crucially, they have home advantage with all three Group A matches taking place in Rome.

Section rivals Turkey, Switzerland and Wales are no pushovers but Italy have developed a ruthless streak under Mancini and should advance convincingly.

Manchester City’s Phil Foden is favourite to be Top Young Player of the Tournament, but it is his teammate Ferran Torres that appeals more at the prices.

The Spaniard scored five goals in his last six Premier League games and has also scored six times in 10 appearances for his country. Spain will likely get an easy run through to the quarter finals and Torres can impress.

Group F has been touted as this year’s Group of Death, with reigning European champions Portugal and the last two World Cup winners France and Germany drawn together alongside Hungary.

Upon closer inspection, though, France and Portugal are a cut above the other two sides. Les Bleus have the deepest squad and are well-drilled under Didier Deschamps and Portugal have a stronger group than when they won the tournament in 2016.

Joachim Low, meanwhile, looks unsure of his best Germany side and they have been porous at the back, conceding six against Spain in November and losing to North Macedonia earlier this year.

Experts’ best bet: Scotland to quality from Group D at 6/5

Scotland are unlikely to pip England for top spot in Group D, but won’t feel that second place is out of reach with Croatia and the Czechs their other rivals.

And even if they should miss out on the top two, four third-placed teams are going into the last 16. The Scots have home advantage against both the Czechs and Croatia and look a big price to go through.