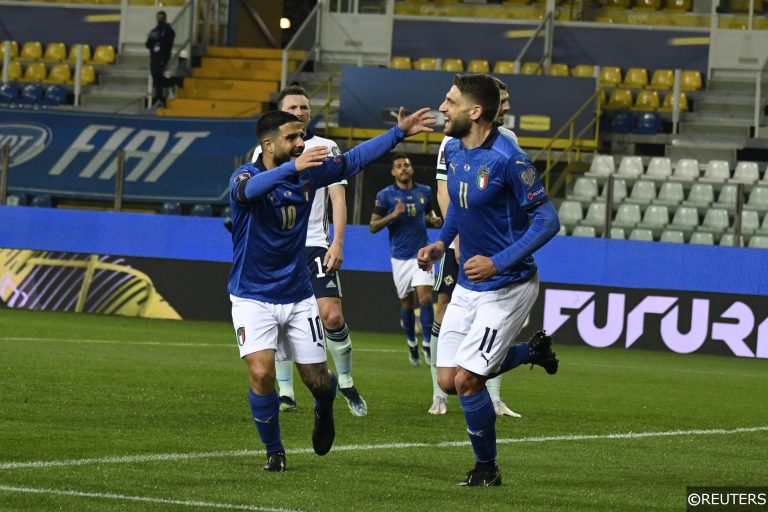 The team here at FST have been hard at work over the last couple of weeks pumping out team guides for every single nation at Euro 2020, and with kick-off just days away it’s time for a brief summary of our findings.

Below you’ll find out best bet for every nation, but if that’s not enough for you we’ve got our comprehensive team guides linked as well to give you a greater insight into how each team might fare over the next month.

Remember to bookmark our Euro 2020 predictions page for all our daily tips and analysis throughout the tournament.

Italy are one of our outside picks for the trophy this summer but the odds for them to reach the Quarter-Finals are enticing too. All three of their group games are being played in Rome and if they win Group A a date with the Group B runner-up awaits. That’s likely to be Russia, Denmark or Finland, all of which are very winnable for Robert Mancini’s in-form side.

Best bet – Switzerland to be eliminated in the Last 16

While Switzerland should be able to navigate the Group Stages they have little chance of running much deeper than a Round of 16 appearance. They haven’t made it past the Last 16 in any major tournament since 1954 and each of their last three tournament appearances have ended in a plane home after the Round of 16.

Best bet – Turkey to be eliminated at the Group Stage

Italy are expected to dominate Group A and take the top spot but Turkey may not be good enough for a runners-up spot either. Switzerland have a lot of international experience and while this Turkey side can be exciting at times they do lack that big-tournament experience. That could make the difference in a group of fine margins.

Best bet – Wales to finish bottom of Group A

Wales had a solid defensive foundation behind Gareth Bale and Aaron Ramsey in 2016 but the same can’t be said of this side. Manager Robert Page has shown little to suggest he can repeat the miracle of 2016 here and a goalless draw with Albania at the weekend doesn’t help matters. Italy, Switzerland and Turkey are all very capable sides and Wales could struggle to match them.

Belgium have lost just two games since their World Cup Semi-Final exit three years ago and they’ve scored 87 goals in 28 games since. Denmark are their biggest threat in Group B but they’ve beaten the Danes twice since the last World Cup. It would be a real shock to see any other team topping the group.

Denmark’s only defeats in the last three years have come against Belgium and they look good value to finish second in Group B. That would pit them against the runners up of Group A, leaving the Danes with a winnable clash against Switzerland, Turkey or Wales to reach the Quarter-Finals. A deep run could be in store for this Denmark squad.

Goals will be hard to come by for Finland but if anybody can get them on the scoresheet it’s Norwich hitman Teemu Pukki. He has scored five of Finland’s last seven goals and he looks great value to outscore his goalshy teammates in what promises to be a tough few games for the Finns.

Best bet – Russia to be eliminated in the Last 16

Russia might not make the top two but a clash with major tournament debutants Finland means a win is likely for the 2018 World Cup hosts. That should be enough to seal them passage to the Last 16, but a third-place finish would likely pit them against Spain, Italy or France in the Round of 16 and they’re unlikely to make it through unscathed.

Best Bet – Austria to be eliminated in the Last 16

With four of the six third-placed teams qualifying for the knockouts progression shouldn’t be much of an issue for Austria but they might find themselves lacking once the knockout stages begin. They have a real lack of pedigree in major tournaments and they could find themselves in a Last 16 tie with Italy.

Memphis Depay is one of only two members of this Netherlands squad to have hit double figures for his country and he will be relied upon to carry the Dutch attack. He has scored four goals in his last five appearances for his country and will get plenty of opportunity to outscore his teammates.

Debutants North Macedonia have been written off as makeweights by a large portion of the football world but they aren’t to be underestimated. They beat Germany 2-1 in March and manager Igor Angelovski likes to play attack-minded football. A couple of goals should be well within their capabilities.

Ukraine aren’t favourites to top Group C but our dark horse picks could spring a surprise on a Dutch outfit with serious question marks hanging over them. Frank de Boer hasn’t been convincing in his time in charge of the Netherlands and Ukraine qualified top of a group containing Portugal to get to Euro 2020, remaining unbeaten throughout. They’re a team to watch.

Croatia might be at a disadvantage in their group due to England’s three games at Wembley but they should be able to fend of Scotland and the Czech Republic to second. Their stars may be waning but they are still a very strong side and a second-place finish would likely set up a winnable clash with Sweden, Poland or Slovakia.

Patrick Schick’s goals have dried up a little for the Czech Republic and value can be found in other players for a side that aren’t expected to score many goals. West Ham’s Tomas Soucek has scored three times for his country this year and his goalscoring exploits for the Hammers this season make him an excellent value pick.

Golden Boot winner in the 2018 World Cup, Harry Kane is still England’s main attacking outlet despite him taking a liking to dropping deep and playing provider this season. He scored in every Euro 2020 qualifier and ended the campaign with 12 goals in ten matches. He’s a nailed-on starter for England and is a dab hand from penalties and free-kicks.

Scotland have a poor record at major tournaments and there set-up basically crams all their best players into the team whether they’re in their preferred position or not. They were generally quite poor in qualifying and needed penalties to make it through both rounds of the play-offs. They could struggle to make an impact against these stronger sides.

Note: Milik has since been ruled out of Euro 2020 after withdrawing from the squad with a knee injury.

Robert Lewandowski takes most of the plaudits when it comes to Poland but striking partner Arkadiusz Milik shouldn’t be forgotten about. Lewandowski’s dominance in the market makes Milik an attractive price after the Marseille forward scored nine goals in his final 15 games of the season.

Slovakia are firm underdogs in this group and while they do have problems all over the pitch these are most pronounced going forward. Their three attackers have just 12 goals in 78 combined appearances and Robert Mak – arguably Slovakia’s most dangerous attacking threat – isn’t likely to trouble the Spanish, Swedish or Polish defences too much.

Getting out of Group E should be a formality for Spain but a clean sweep might be pushing it a bit. They drew three of their four games at the 2018 World Cup and four of their last seven matches. They could easily slip up against one of these three sides and even if they win their opening two matches they are likely to rest key players in the final game.

Best bet – Sweden to be eliminated in the Last 16

While Sweden will face stiff competition from Spain and Poland their clash with a poor Slovakia team make them a good bet to make it through the groups. However, a third place finish would set up a difficult clash in the Round of 16 and that’s where their journey could end this summer.

It might be a tough group but this France side have the best squad in world football and the World Cup holders can top the pile in Group F. They’ve won their group at each of their last three major tournaments and come up against a Portugal side that haven’t topped a group since Euro 2008 and a Germany side with some major problems right now.

Best bet – Germany to be eliminated at the Group Stage

Germany are the bookmakers’ favourites to land top-spot in Group F despite their Group Stage elimination in the 2018 World Cup. The intervening three years have been difficult and Germany have only won six of their last 13 games, a run which includes a shock home loss to North Macedonia and a demolition at the hands of Spain. They could struggle.

Hungary are huge underdogs in Group F but it’s worth remembering they finished ahead of eventual winners Portugal in their Euro 2016 group. They scored six goals in four games that tournament and have scored in 15 consecutive home games. They’re unlikely to qualify from the group, but a couple of goals are certainly within reach.

One of the best players to ever grace the European Championship, Cristiano Ronaldo will be  playing in his 11th major international tournament and he’s found the net in every one of them. He is their talisman and main attacking outlet and after scoring four times in the 2018 World Cup and topping the Serie A scoring charts last season he could be in for another fantastic tournament.