After a manic month of football, Friday marks the beginning of the last Premier League weekend before another international break! Let’s make the most of it before that long 14 day wait for the next dose of action…

Brighton and West Ham kick us off for starters in the Friday Night Football – not the worst start! No early match on Saturday means we’re having five 3pm fixtures before Manchester United host Newcastle in the evening as the main course. And Super Sunday is the one to watch with Liverpool hosting Manchester City to close off the weekend in style!

So… what are we thinking for Fantasy Premier League? Well, with most managers already having the likes of Sergio Aguero and Eden Hazard in their FPL teams, we continue to seek out the best alternate options available. Kick back and take a read of our ten player recommendations for Gameweek 8. 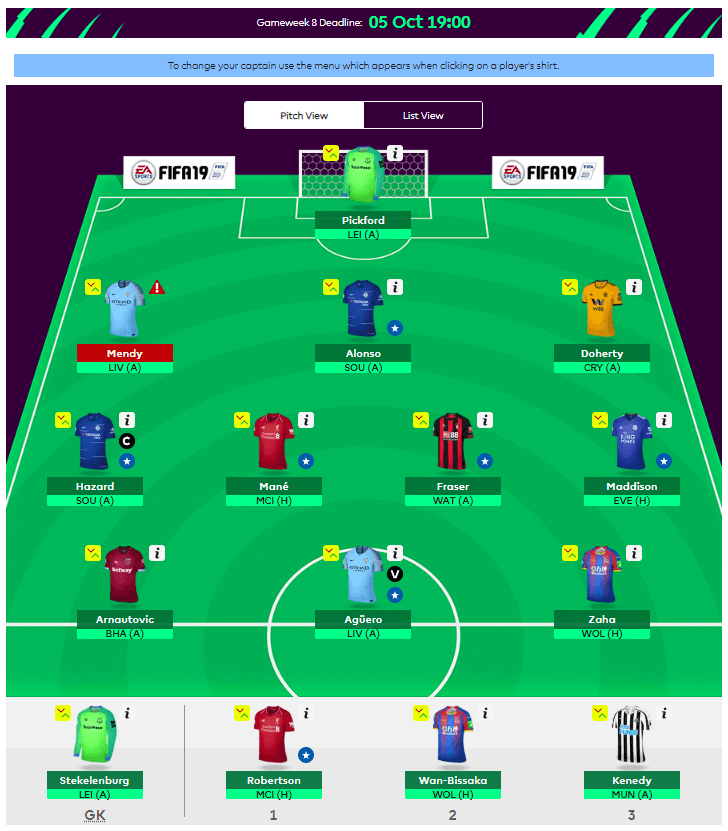 Harry Kane hasn’t made an appearance in our FPL article series until now and for one good reason: he hasn’t quite looked up to scratch since the 2018 World Cup. And yet, the Golden Boot winner has still averaged just under a goal per game this season. His tally of 3 goals over Spurs’ last two outings against Brighton and Huddersfield saw him take a whopping 22 FPL points and a mid-week goal against Spanish giants Barcelona in the Champions League is only going to help rebuild his confidence.

Kane now looks ahead to a match at home to Cardiff on Saturday, and you’d have to be thinking he’ll be looking to continue silencing the critics in that one. Cardiff have had a tough start to life back in the Premier League and they’ve been somewhat predictable in terms of form up to this point, taking draws against opponents of similar quality like Huddersfield and Newcastle, but struggling against top sides like Arsenal (3 goals conceded), Chelsea (4 goals conceded) and Manchester City (5 goals conceded). 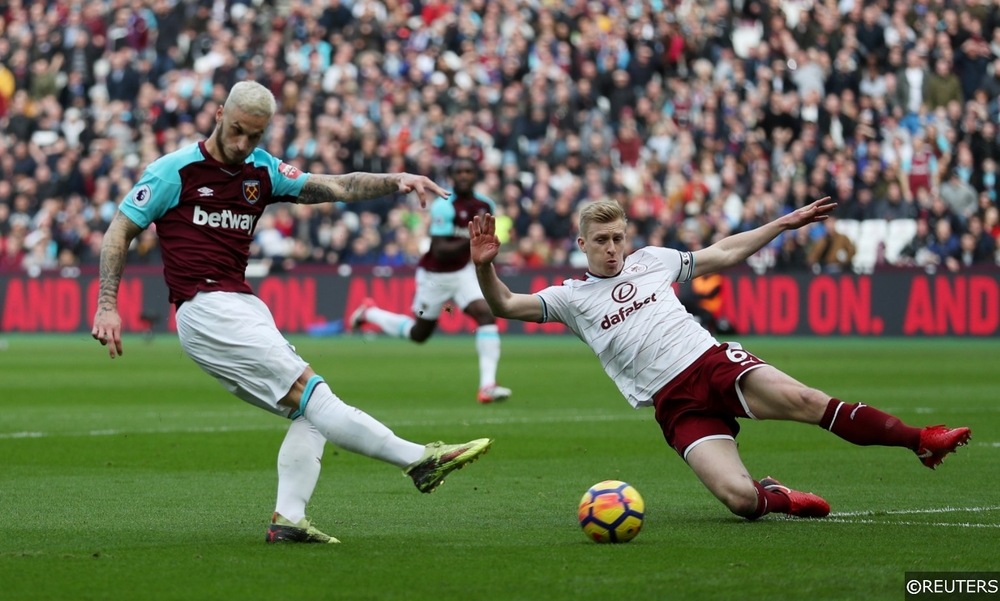 Marco Arnautovic has been a steady source of FPL points this season. His four goals and an assist average out to roughly 6 points per match and his average of 113.3 minutes per goal is second only to the 103.2 minutes of Sergio Aguero (£11.4m) among regular starting forwards… and yet he remains at his starting price of only £7.0m! Arnautovic has been in our team from the start but it’s not too late to get on board.

His form is even more impressive when West Ham’s schedule is factored in. Manuel Pellegrini’s side have faced Liverpool, Arsenal, Chelsea and Manchester United over their first seven matches – a tough run for any side – but now their fixtures are set to ease. Arnautovic travels to a Brighton side struggling defensively – in fact, the Seagulls are one of only two sides yet to keep a clean sheet – and with the Austrian performing just as well on the road as at home – he’s produced 19 of his 36 FPL points in away matches – you’d expect him to capitalise on this. 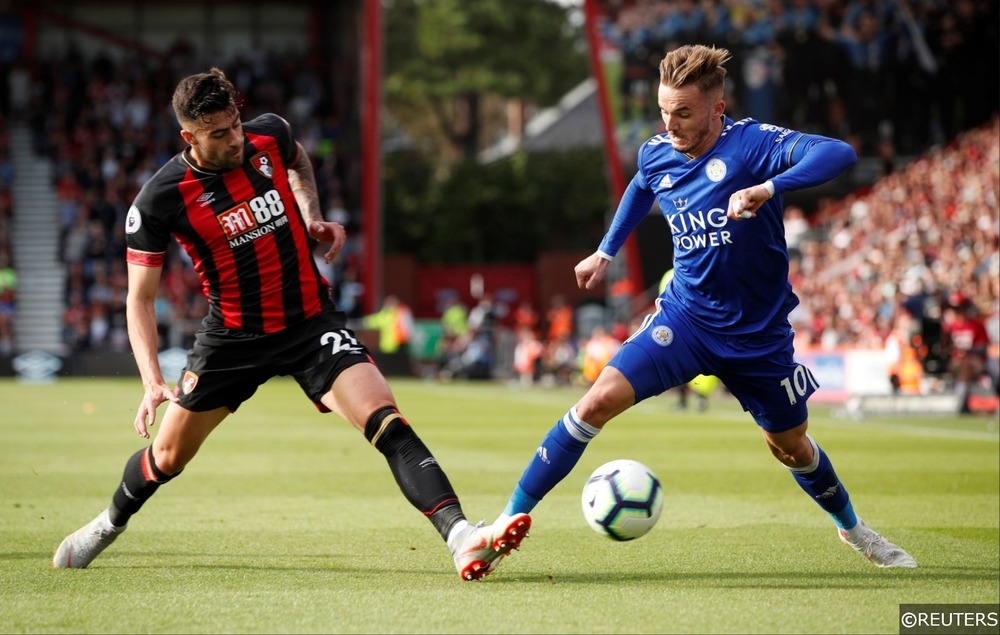 James Maddison’s quick integration into the Leicester City system has been so smooth that his form has gone largely unnoticed, perhaps because of the popularity of similarly priced midfielders like Ryan Fraser and Richarlison. Maddison has scored two and assisted two in his last four starts for The Foxes and he’s taken over the majority of set piece duties following the departure of Algerian Riyad Mahrez. And like last weekend showed, with a player like Harry Maguire on the receiving end of these, you can count on him to be a threat from dead-ball situations.

He is high up the charts for shots from direct free-kicks too, one of which he scored the match before last against Huddersfield. His 15 shots and 15 chances created are numbers bettered by no other teammate, although Jamie Vardy (14 shots) has missed three matches to suspension, so Maddison should continue to be one of Leicester’s main threats at home to an Everton side that has conceded two goals in every away match so far this season. 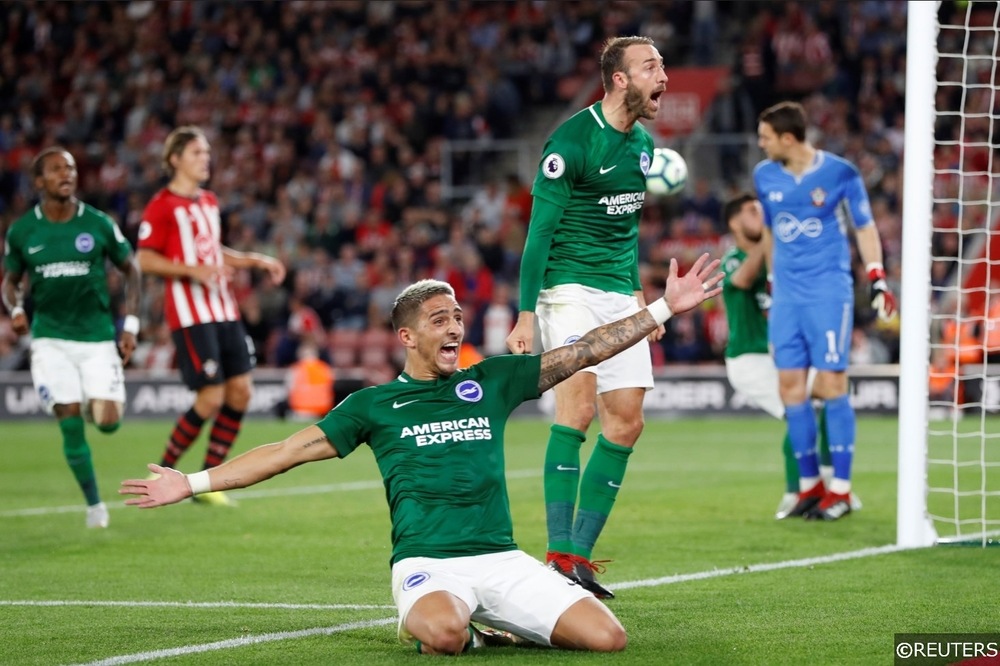 Brighton are another side now through their tough start to the season and looking ahead to a favourable run of fixtures, so with German midfielder Pascal Gross sidelined and possibly out of favour, Frenchman Anthony Knockaert looks the go to Seagulls option. He has one goal and three assists for Brighton over seven starts and his total of 27 points sees him ranked 6th of all midfielders priced £6.0m or lower. Owned by just 1.1% of managers, he could be a tidy differential over the coming weeks.

Brighton’s run starts with a home encounter against West Ham, who travel to the Amex without a clean sheet in three away matches – their tally of eight goals conceded over this run is the third-worst record in the Premier League. Knockaert himself has been particularly consitent at home, producing a goal or an assist in all three of his appearances there so far this season – an average of six points per home match – including against Manchester United and Tottenham Hotspur. His influence within Chris Hughton’s side is clear: his 14 shots on goal and 11 chances created are more than any teammate.

Wolves’ Matt Doherty has impressed in his role playing right wing-back in Nuno Espirito Santo’s 3-4-2-1 formation and he looks a top budget defensive option. Like Chelsea’s Alonso, Liverpool’s Robertson, or City’s Mendy, he’s an attack-minded defender. In fact, no Wolves player has tallied more crosses from open play than the Irishman. Doherty has also been a significant goal threat in the opening fixtures, totalling the third-most shots on goal among his teammates.

Wolves travel to Selhurst Park on Saturday having recorded clean sheets in three of their last four matches. Their 1-1 draw away to Manchester United was no bad feat either. Wolves also rank low on the charts for allowing big chances – that is, opportunities where an opponent player is expected to score – and shots against them inside the penalty area. As such, a combination of strong defensive form and attacking potential could see Doherty earn yet another big haul.