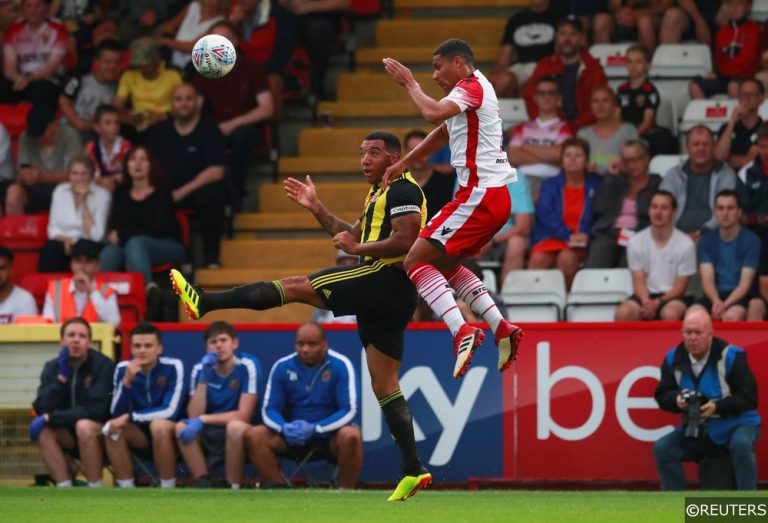 All eyes may have been on Russia this summer but the time for the new season has already arrived and in League Two, we have already had a glimpse of what the season ahead will bring. But which sides lived up to the pre-season hype and which sides still have plenty of work to do? We review the best results from League Two this weekend.

Result of the Weekend:

Okay, so anybody who read our preview of the match will know already that we fancied Crewe to win this clash on the opening day of the season. The hosts had a relatively quiet summer in the transfer market but they have a young squad who will have benefited from a full pre-season and the lack of new signings means there was little work to do for the squad to gel together.

Then there is the visitors, who are one of our picks to suffer the drop this season. It is not a new feeling for Morecambe as they are frequently towards the top of the teams who are favourites to drop out of the Football League but their ageing squad hasn’t really be strengthened in the summer and it appears as though their look has finally ran out.

Alex Nicholls scored twice on his Crewe debut as the former Barnet striker, who is one of four summer signings made by the club, added to Charlie Kirk’s sixth-minute opener with a brace. Midfielder James Jones scored two long-range strikes past a beleaguered Paddy Roche in the closing stages, while substitute Chris Porter also got in on the act with a late header.

It was a strong start by the hosts as they were 2-0 up after 10 minutes and although that was the end of the scoring for the half, the Alex put their foot back on the gas after the break. Nicholls added his second in the 63rd minute when he finished a four-man move with a sweet volley.

Vadaine Oliver hit the post for Morecambe and was unlucky not to open his account for the season, but the visitors then conceded three times in the final 18 minutes. Jones strode forward to bury a 25-yard shot into a bottom corner before Porter headed in the fifth at the far post Jones then replicated his strike with another long-range effort in the last minute.

Fans of lower league football will often point to the unpredictability of the matches and the fact that any side can beat any other as a key reason why they love the game, and that is exactly what happened at the County Ground last weekend.

The points looked set to be returning home with Macclesfield after Koby Arthur’s second half double looked to have set Macclesfield on their way to a dream return, but the late spot-kick drama denied them.

It was a pretty drab first half in comparison to what was to come and the sides headed back to the dressing room at 0-0. However, that was soon to change and those fans who stayed for the entirety of stoppage time were rewarded for their patience.

Tranmere’s return to the Football League has been a long time in the making, but after half an hour they were brought back to earth with a bang as Stevenage put them to the sword. Stevenage started the season strongly when defender James Ball punished Rovers for failing to clear their lines as he fired home from just inside the box.

Joel Byrom is now into his his second spell as a Stevenage player following his return to Broadhall Way in June, and he marked his second competitive debut for the club with a goal when he bent the ball past Scott Davies to make it 2-0.

Tranmere did not win their place back in the Football League easily though and they showed their never say day attitude when with play-off hero James Norwood slotted in to make it 2-1 before the break. Norwood enjoyed an excellent season in front of goal last term and he proved the step up in level was not beyond him as he doubled his tally early in the second half when the forward converted after Ritchie Sutton nodded down a free-kick.

The drama was not finished there though as Stevenage were reduced to 10 men as full-back Johnny Hunt picked up a second booking for chopping down Ben Tollitt. The visitors tried their best to take full advantage of the additional man but as much as they huffed and puffed, they were unable to complete a remarkable turnaround.

With all the football that was on over the weekend, it is possible this result flew a little under the radar as Grimsby Town fell to an opening day defeat at the hands of a Forest Green Rovers who are starting only their second ever season in the Football League.

The hosts broke the deadlock when referee Martin Coy judged Martyn Woolford’s cross to have struck the arm of Lloyd James, and Mitch Rose made no mistake as he gave Grimsby the lead from the spot.

However, Forest Green brought themselves back level after the break when Carl Winchester found space in the centre of the box and planted the ball into the bottom corner. A bizarre moment then saw Danny Collins roll the ball into his own net as he looked to pass back to James McKeown. Highly touted striker Christian Doidge headed home his first in acres of space and he was able to grab his second as he latched on to a back pass in the latter stages.