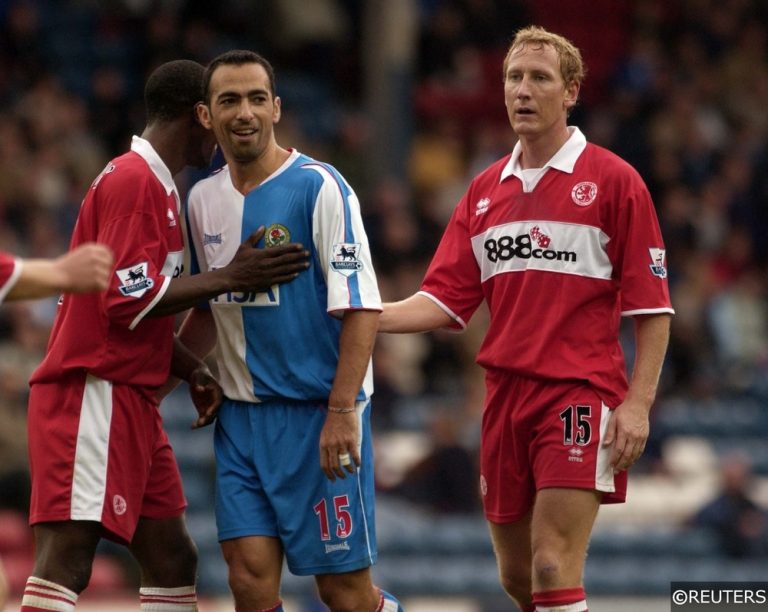 Last week, Slavia Jokanovic became the first managerial casualty of the 20181/9 Premier League season when he was relieved of his duties by Fulham chairman Shahid Khan.

In one of those little delicious coincidences that football loves to throw up on occasion, Jokanovic was replaced by a man who had signed him as a player nearly 20 year earlier.

As it turns out, Claudio Ranieri made the Serbian his first signing as new Chelsea manager in 2000. Jokanovic arrived at Stamford Bridge from Spanish club Deportivo la Coruna in a deal worth approximately £1.7m.

The defensive midfielder enjoyed only a brief flirtation with the Blues, playing just 39 Premier League matches over 2 seasons before returning to Spain with Ciudad Murcia.

Jokanovic’s stint at Chelsea was the kind of insignificant spell that dissolves quickly into the mists of antiquity – though it did get us thinking.

What other famous footballers had almost surreal spells at unusual clubs? What other player/club relationships have we completely forgotten.

In our “did he really play for them” series, we take a closer look at some of them.

Everybody remembers French World Cup and European Championship winning midfielder Youri Djorkaeff’s late-career spell with Bolton Wanderers between 2001 and 2004, but the former PSG and Inter star also enjoyed the briefest of flings with the Trotters Lancashire rivals Blackburn Rovers in 2003.

Fresh from his most productive season in English football, where he scored 10 times in 39 appearances for Bolton, Djorkaeff moved down the road to Ewood Park in late September 2004 on a short-term deal after moves to Fulham and Birmingham fell through.

Djorkaeff made his debut for Rovers in a 2-2 draw with Aston Villa at Ewood Park on October 1st, and played just twice more for Blackburn’s in successive 0-4 defeats to Middlesbrough and Chelsea.

A hamstring injury kept the Frenchman on the sidelines and out of action for the rest of his short-term contract, and Rovers boss chose not to renew the deal when it expired in late December 2004.

Djorkaeff went on to enjoy 2 great seasons in the MLS before retiring in 2006.

Read More: Betting Stats: Best teams to bet on in the over 2.5 total goal markets

Widely regarded as one of the best centre forwards and finishers of all time, Gabriel Batistuta scored nearly 300 goals at club level and over 50 times for Argentina at international level.

Batistuta or “Batigol” as he was Christened by Fiorentina supporters, spent 9 iconic seasons with La Viola between 1991 and 2000. In recognition of his explosive performances, Fiorentina fans erected a life-size bronze statue of Batistuta in 1996.

Batistuta’s Fiorentina career was littered with goals, however, bar a Serie B title triumph in 1994 and a a Coppa Italia win in 1996 and, silverware and success eluded the explosive striker at the Stadio Artemio Franchi.

AS Roma offered Batigol a final roll of the championship dice in 2000 and the 31-year old grabbed the opportunity with both hands scoring 20 league goals during the Gaillrossi’s first Serie A title winning campaign since 1983.

After 2 and a bit years with Roma, Batistuta was loaned out to Inter Milan in a move that feels like it never happened in retrospect. Batistuta played second fiddle to the partnership of Christian Vieri and Hernan Crespo during the 2002/03 season, and appeared just 12 times in Inter’s famous black and white stripes, scoring only twice.

In the twilight of his glittering career, former World Player of the Year George Weah donned Manchester City’s sky blue in 2000. City had just been promoted back to the Premier League after 4 years in the lower-league wilderness, and their capture of Weah was understandably seen as a huge coup for the Citizens.

Weah had spent the previous season with Chelsea on loan from Serie A giants AC Milan, though the Liberian only managed to score 5 goals in 15 appearances for the Blues.

When Weah’s contract with the Rossoneri expires, City pounced to add him to a squad that contained players like Paulo Wanchope, Richard Dunne, Shaun Wright-Phillips and Shaun Goater.

Weah and City’s honeymoon period was short however – the veteran hitman scored just once in 7 appearances in the league, before walking out on the club in mid-October. Weah had completed 90 minutes just 3 times for City and had expressed his frustration about being withdrawn so often by City boss Joe Royle.

City were eventually relegated from the Premier League at the first time of asking, before yo-yoing back up again a year later.

Yaya Toure’s older brother Kolo had a long and successful association Arsenal between 2002 and 2009, though the Ivorian could have been regularly playing alongside his sibling for the Gunners during the same period.

In 2001, long before he established himself as one of the world’s finest midfielders with Monaco, Barcelona and Manchester City, Yaya Toure was plodding around Belgian pitches with Beveren.

Toure was a talented, if completely unrefined footballer at the time – the very definition of a rough diamond. Arsene Wenger saw something in the awkward, leggy youngster however, and brought him over to Arsenal for a trial in the summer of 2003.

Wenger handed Toure his first start for Arsenal in a pre-season friendly with Barnet. Wenger moved Toure around the pitch at Underhill, aching to find a position that Toure looked comfortable in.

The youngster looked utterly lost however and his performance was described as “completely average” by Wenger at full time. Convinced of his latent talents, the Arsenal boss still tried to hatch out a permanent deal for Toure.

A drawn-out work permit application process frustrated Toure however, and the Ivorian instead chose to sign for Ukrainian outfit Metalurh Donetsk in December 2003.

A lifetime before winning any of his 106 England caps or lifting any of the 3 Premier League titles, 4 FA Cups and 1 Champions League titles with Chelsea, Frank Lampard had a short loan spell in Wales with Swansea City.

In 1995, a slight of shoulder 17-year old Lampard was sent down to the old English Second Division by West Ham manager Harry Redknapp to get a taste of competitive action.

Lampard made his debut for the Swans in a 2-0 win against Bradford City and scored his first career goal against Brighton and Hove Albion shortly after.

Lampard returned to West Ham in January 1996, and made his debut for the Irons later that month against Coventry City.

Lampard still credits the loan for playing a huge role in his development. Speaking in 2014, he said:

““It was a great learning curve for me. It was a real boy chucked into a man’s world. It was about a stage of growing up.Harry Redknapp sent me down there. It helped me grow up a lot. I was rooming with Robbie Dennison, the winger who used to play for Wolves who was on loan there.”

“We had two single beds. He was 35, and I was 17, other ends of our careers. It was quite interesting. I didn’t really know what to say to him when I lay in bed at night!”

“He had two kids and I wanted to go out! But that grounding certainly helped me. That was the whole point of Harry sending me there.”

Keep an eye out of the next installment of our series. Part two features Roberto Mancini’s spell at Leicester City, Aaron Ramsey’s stint at Nottingham Forest and Tyrone Mears brief period at Marseille among others.

Check out all of this week’s expert match previews, predictions and betting tips here