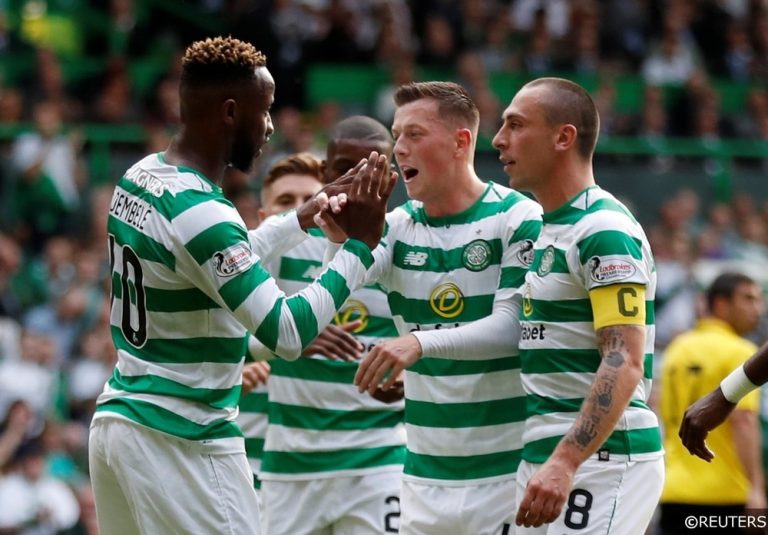 Our Scottish football expert here at FST made a flying start to the 2018/19 Scottish Premiership campaign last weekend, predicting all six results and achieving a clean sweep in our main preview tips! Not only that, but three of our six correct score predictions landed as well, making it one of our best ever weekends on the Scottish Premiership!

Make sure to check out all of this weekend’s Scottish Premiership predictions here.

Please note that these stakes and figures are used for illustrative purposes only and we do not recommend following them. Every person’s financial situation is different, so please remember to always gamble responsibly and stay in control. We have some responsible gambling tips on our website so check them out.

St Mirren got their new season off to a great start after spending a few years in the Scottish Championship. Last week saw Alan Stubbs’ side beat a Dundee team that’s still trying to to find its feet, and the Saints took good advantage of it. Both goals came from Danny Mullen, who put his team in front in the 8th minute as he connected his head with a superb cross. Their advantage wouldn’t last long, as N’Gwatala equalised from a loose ball that fell to him on the edge of the box, and he put it in the back of the net.

Mullen would prove once again he’s hungry for goals in his debut season in Scotland’s top flight by putting pressure on Dundee’s goalkeeper Jack Hamilton, a move that would throw the keeper off his game as he tried to dribble past the striker- only to fail miserably and gift Mullen the winning goal in the dying minutes of the match.

Kilmarnock continued to impress everyone and are still building off of last season’s great form. Last week’s match against St Johnstone saw the two sides meet once again in the opening fixture of the new season. Last year’s victors were this year’s losers, as St Johnstone simply could not contain Steve Clarke’s side- although they did do a good job of keeping them at bay until the 60th minute.

Read more: Ones to Watch- Kilmarnock

Scott Boyd was the man to break the deadlock and finally put Killie in front, as he managed to tap in the ball that the goalkeeper fumbled  with after a brilliantly executed set-piece. Despite going 1-0 down, Kilmarnock still struggled to score another goal- which they thoroughly deserved. The Saints managed to hold on until the 85th minute when Mikael Ndjoli sent a missile of a shot into the top corner after a well-worked counter attack, sealing the game for his side.

Any sort of anti-football tactics seems to have disappeared completely from Hearts after applying them last season, and they Jambos have got their league campaign off to a great start after beating Hamilton 4-1 away from home. It was clear from the first minute that the Edinburgh side would dominate the match, and the statistics back that up. However, that didn’t stop Mikel Miller from putting the Accies in front.

Hearts would quickly counter that strike in the 20th minute with a goal from Peter Haring, which then allow Craig Levein’s side to ultimately put three more past Hamilton. Despite the possession being split almost evenly, Hearts took a massive 20 shots in the whole game, 10 of which ended up going between the three posts. Steven Naismith would convert a penalty to put Hearts in front, Haring doubled his lead and their performance was rounded off with a chip from Steven MacLean to seal a 4-1 for them.

Celtic got their title defence off to an impressive start, especially considering they’ve been playing competitive, European football for the better part of a month. The Hoops’ faced no real problems during the match, but Livingston did well to hold them off for as long as they did- despite conceding within 8 minutes thanks to a header from Tom Rogić.

Odsonne Édouard doubled the champions’ lead after a good attack as he was assisted by fellow Frenchman Olivier Ntcham, and the latter would later on seal the game for Celtic with a penalty given to Brendan Rodgers’ side early in the 2nd half. Livingston continued to play as well as they could, and their resilience rewarded them with a goal- and their only shot on target- in what was the last kick of the game.

This match was a special one as it marked the beginning of an era for Rangers with Steven Gerrard at the helm of the club. The match was a controversial one and it all kicked-off after star striker Alfredo Morelos was sent off in the 12th minute for a violent conduct offence, a decision that should have given Aberdeen an advantage that they desperately needed.

Read more: How Did Steven Gerrard Do On His SPFL Debut?

However, it was Rangers who still had the upper hand for most of the match, and the first half culminated with a dubious penalty decision that was awarded to Gerrard’s side that would then be converted in by James Tavernier.Aberdeen were completely out of ideas and created very little chances, but luck was with them and they managed to steal a point from the match after 19-year-old Bruce Anderson came on to score the winner in the 93rd minute of the game in what was the Dons’ only shot on target.

Hibs’ red-hot form continued al through last week, as Neil Lennon’s side managed to win their opening fixture of the new Premiership season comfortably by beating Motherwell 3-0. The Well had enjoyed a good pre-season performance, but were no match for the Hibees. However, Hibs did have a degree of luck that denied Motherwell a deserved goal.

It’s surprising that didn’t concede a single goal, what with their defence being one of the more inconsistent ones in recents weeks- and the Edinburgh side were beginning to get too familiar with crazy scores such as 6-4 or 6-1- so its nice to see that they’re progressing as the season goes by.

Motherwell managed to keep a cool 47% possession, as well as taking six shots in the game. However, two first half goals from Stephen Mallan and Oliver Shaw were enough to put Motherwell out the game, and it was sealed once Hibs scored the 3rd one within 6 minutes of the second half started thanks to a strike from Martin Boyle.

That brings our total profit for the opening weekend of the Scottish Premiership to a huge £342. We think we can make our tips even better though – The anytime goalscorer market let us down last weekend so we’ll be making sure to be a lot more selective with our choices there in the future, and hopefully bring you even more winning tips!