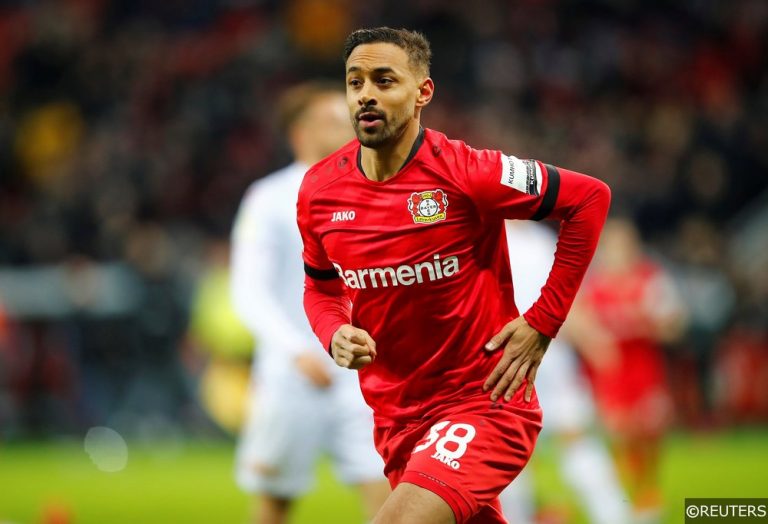 As we near the end of the first weekend of top-level footballing action in Germany, we take a look ahead at Monday night’s mouthwatering clash between a high-flying Bayer Leverkusen and a Werder Bremen side in turmoil.

The hosts come into this game second from bottom in the Bundesliga and five points adrift of the relegation playoff position currently occupied by Fortuna Dusseldorf. Winless since January in the league, Die Werderaner’s 29-year spell in the top flight is under serious threat.

In stark contrast, Bayer Leverkusen were in magnificent form before the enforced break in play, unbeaten in competitive football since the start of February and having won nine of their 10 matches since.

We’ve put together a tasty looking #OddsOnThat selection for Monday night’s televised clash, and if you can check here for our Werder Bremen vs Bayer Leverkusen predictions.

Want to add FST’s 66/1 selection straight to your betslip? Check it out below:

Bayer Leverkusen to win by 2+ goals

Werder Bremen have had a truly torrid time this season. Harbouring the Bundesliga’s worst defensive record (55), they have lost 14 of their 24 league games and, strangely, their record actually gets worse a the Weser Stadium.

Die Werderaner have picked up just five points from their 11 home games and have lost eight times. They haven’t won on home soil since September and each of their last six outings have ended in defeat. To make matters worse, they haven’t scored a league goal at the Weser Stadium since November and each of their last four league games there have seen them lose by at least a two goal margin.

As we’ve already touched upon, their visitors are in sensational form. They have won nine of their last 10 competitive games and scored 27 goals in the process. Defensively there are some holes, but they’re playing a team that have scored just eight home goals in the Bundesliga all season. A comfortable win for the visitors looks to be on the cards.

One of the hottest properties in German football, Kai Havertz has been an absolute revelation for Bayer Leverkusen since he upped his game last season. He scored 17 goals in 34 Bundesliga appearances in 2018/19 and, while he hasn’t been quite as prolific this term, he was picking up some serious momentum before the halt in play.

The 20-year-old attacking midfielder has scored five goals in his last eight competitive appearances, adding a cherry on top in the form off five assists as well. His last trip to the Weser Stadium saw him find the net twice in a thrilling 6-2 Bayer Leverkusen win back in October 2018, and he’ll be the main danger man for Werder Bremen to deal with.

Bayer Leverkusen are one of the leading teams in the Bundesliga in terms of corners won, heading to the corner flag 5.92 times per game on average. Only Bayern Munich, Eintracht Frankfurt and Borussia Dortmund average more corners per game.

Werder Bremen are no slouches either though, sitting on an average of 4.61 corners per game. The hosts are, however, a bit more lax in stopping the opposition. Their 5.48 corners conceded per game means the total corners per game lies at 10.09.

Marco Friedl to be booked

Werder Bremen are by no means the dirtiest side in the Bundesliga, but young left back Marco Friedl is no stranger to the referee’s ire. He has picked up seven bookings in all competitions for Werder Bremen, and he will have the unenviable task of keeping an eye on Kai Havertz.

Havertz tends to operate in a more central attacking midfield position but he’s known to drift over to the right on occasion and, along with right wing back Mitchell Weiser, he will keep Friedl very busy indeed.

22-year-old Friedl has picked up all seven of his bookings in his last 11 games for Werder Bremen, so backing him to get into trouble again looks a good choice.