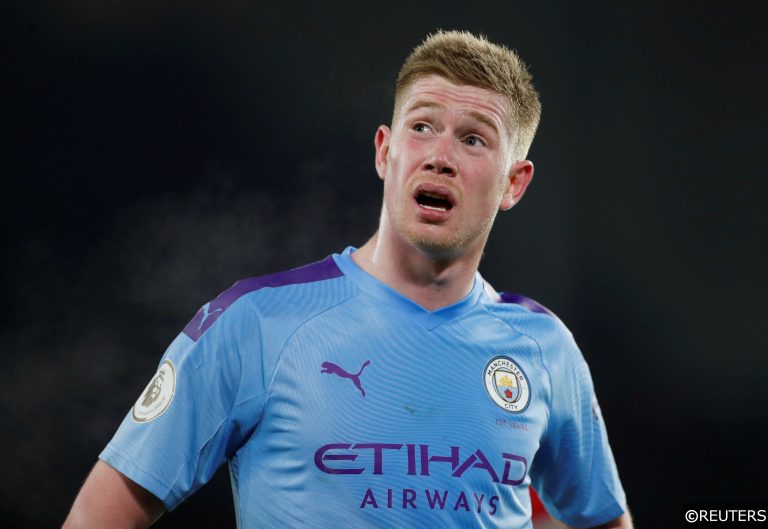 Fantasy Football Game Week 34 covers the Premier League’s action packed mid-week schedule where a full round of 10 potentially enthralling fixtures will be contested across Tuesday, Wednesday and Thursday evening.

With just a smattering of FF game weeks left to play, chances to gather a late haul of points to spark a last gasp surge up the Fantasy Football standings are running out.

Fortunately, FST is here to help your push for a maximum points return before the campaign’s climax with some of the best handpicked Fantasy Football tips around.

Remember – for a detailed analysis of all the mid-week top-flight fixtures, check out our Premier League predictions page. 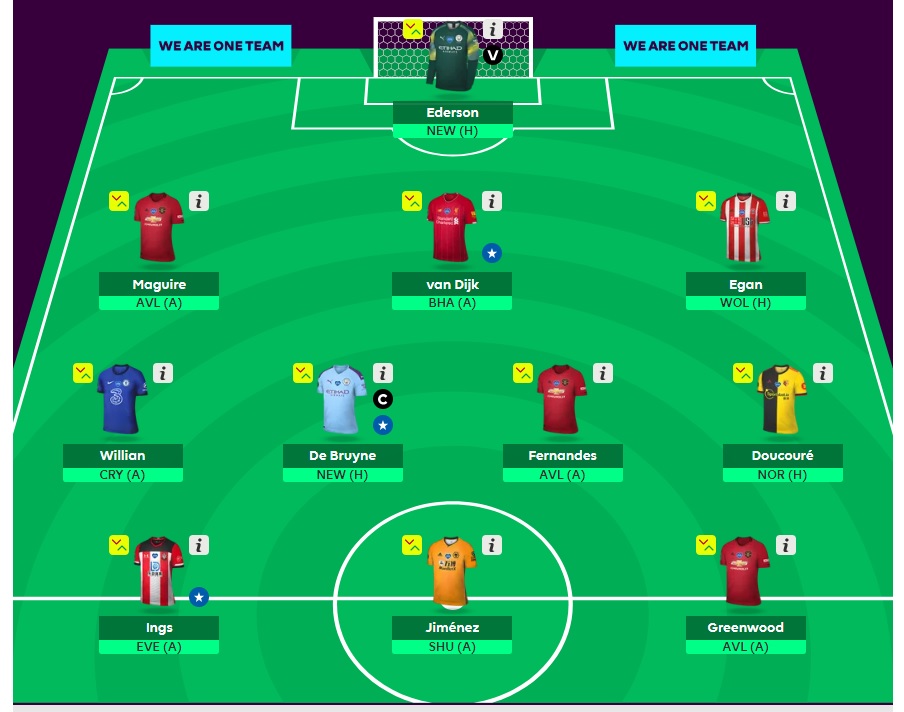 Building from the back

With fixtures against Newcastle, Brighton and Aston Villa respectively, big-hitting trio Manchester City, Liverpool and Manchester United are the teams to plunder for those targeting clean sheet points this week.

The Citizens turned the Magpies over with ease in the FA Cup just a couple of weeks ago in a one-sided contest where Newcastle never looked like threatening Ederson’s goal, while Man City are also enjoying a superb run of four Premier League shutouts on the spin at the Etihad Stadium.

The Brazilian net minder will be likely have a watching brief again this week and is a solid pick between the sticks for GW34.

Elsewhere, Liverpool take the Premier League’s best defence to the AMEX Stadium on Wednesday to face aBrighton team that failed to notch in three of their last five, while Manchester United’s increasingly robust rearguard will line up against an Aston Villa attack that failed to register in four of their last six.

United skipper Harry Maguire, who has already bagged an impressive 104 points this term, is cheaper than both defensive teammates Aaron Wan-Bissaka and Luke Shaw – making him a profitable pick at 5.3m, while the second highest scoring defender in FF this season, Virgil van Dijk also looks a snip at 6.5m this week.

Sheffield United’s in-form stalwart John Egan, who pocketed 12 points in his last two starts, is a great option to fill out your backline at a reasonable price this week too. 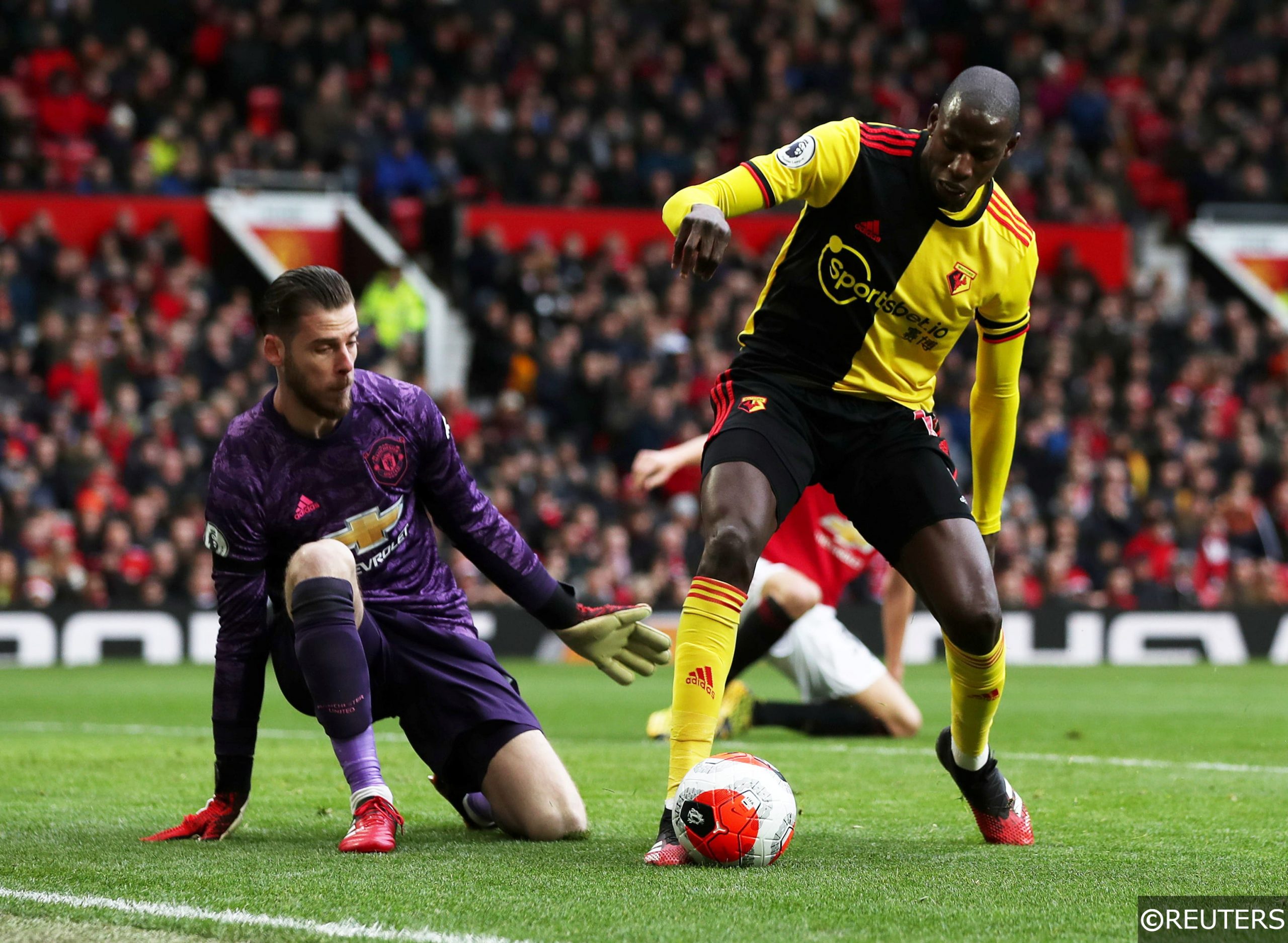 Construct your midfield around de Bruyne

Belgian midfield maestro Kevin de Bruyne delivered a whopping 36 points in his last three starts for Manchester City, and the silky schemer is well worth the 10.7m investment again this week.

De Bruyne plundered goals in each of his last two appearances against Newcastle, and the consistently influential 29-year-old will offer plenty of attacking thrust from midfield when the Citizens meet the Magpies again on Wednesday.

Elsewhere, if you haven’t jumped on the Bruno Fernandes gravy train, then it’s high time you joined the 26.5% of FF players who have, by splashing out the 8.8m required to get him in your team this week.

Bruno bagged 15 points in each of his last two appearances for Man Utd, and his productivity continues to blow minds to confetti at Old Trafford. United are favourites to win again at Aston Villa on Thursday, and main man Fernandes will likely be central to all of their attacking play again.

If you’ve exhausted all your funds and need a midfield bargain this week, then Watford’s Abdoulaye Doucouré could be just what you’re looking for.

The marauding midfielder has 100 points already this term and the Frenchman can add to his tally when Watford face a down and out Norwich team at Vicarage Road on Tuesday evening.

No need to spend big in attack

In terms of overall value, Fantasy Football players have been spoiled this season by the raft of overperforming forwards – many of whom are delivering the goods for relatively modest prices.

Danny Ings, who is the joint third highest scoring centre-forward this term with 168 points, is still available for a pocket change price of 7.3m, while Wolves’ star Raul Jimenez, also on 168 points, can be snatched up for 8.3m

Both players remain their respective club’s most potent outlets up front, and should have chances to score at Sheffield United and Everton on Wednesday and Thursday.

We pushed for the 18-year-old’s inclusion in out tips for Game Week 33, and Greenwood rewarded FF players with 13 points after his man of the match performance against Bournemouth.

The wonderkid should keep his place in the United XI at Villa Park this week, and with his confidence soaring, Greenwood can do some damage again. 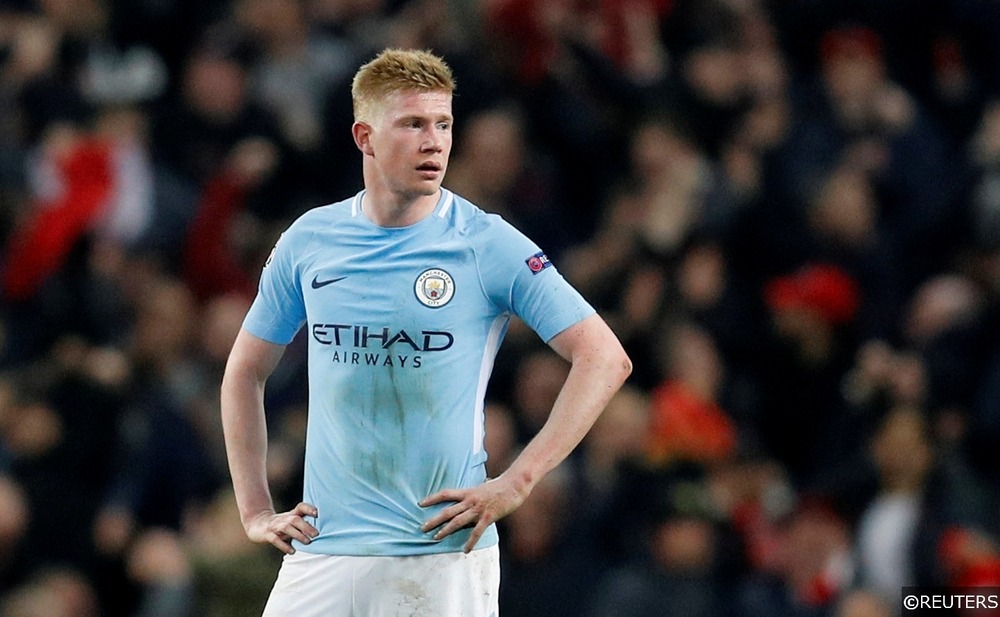 As we detailed earlier, Manchester City world-beater Kevin de Bruyne tends to save some of his best work for the Citizens’ games against Newcastle.

The Belgian international gathered 10 points when City last played the Magpies in the Premier League in November, and was again one of his team’s start performers when City beat Newcastle 2-0 in the FA Cup quarter final last month.

De Bruyne sat out the first hour of City’s surprise 1-0 loss at Southampton on Monday, and the 29-year-old’s energy levels should be fully topped up on his return to Pep Guardiola’s XI this week.

FST’s 5 favourite priceboosts for all the midweek action