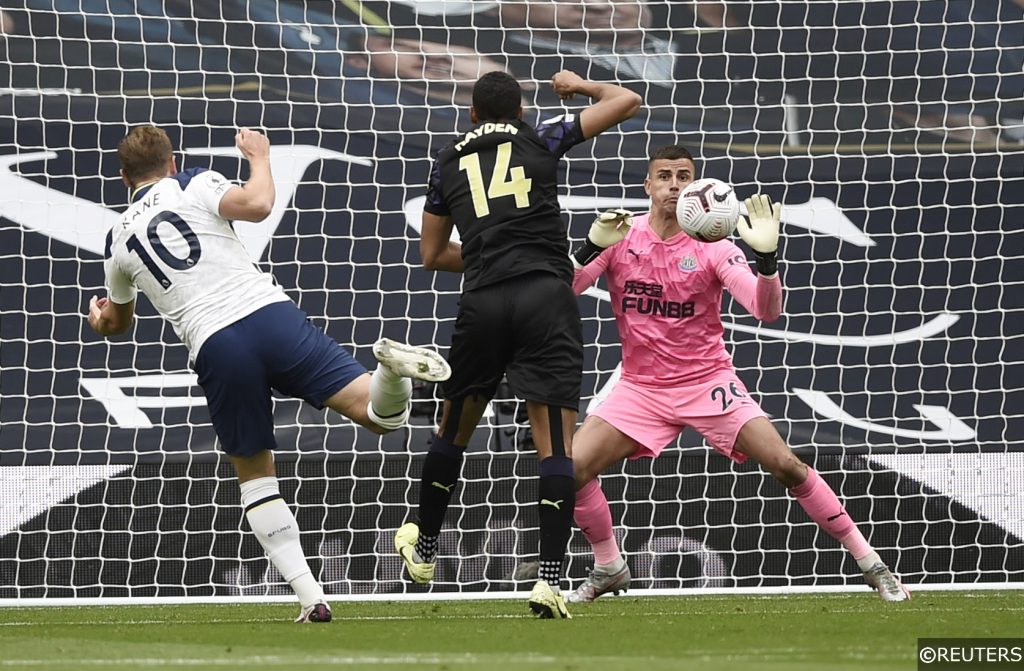 After last week’s record-breaking haul, England’s top-flight kept the nets rippling between Saturday and Monday in GW3, and in total a whopping 36 goals were plundered across the 10 Premier League matches contested.

On Saturday, Chelsea were the only away team to drop points when they were held to a hugely entertaining 3-3 draw at West Brom, while Man Utd, Everton and Southampton eked out victories on the road at Brighton, Crystal Palace and Burnley respectively.

A day later, Leeds and West Ham collected maximum points from their tussles with Sheffield United and Wolves, while Spurs were denied a win by a controversial late Newcastle spot kick in North London.

Leicester City’s incredible 5-2 win at Manchester City was the pick of the results on Sunday however, though the Foxes needed a hattrick of penalties to run up their emphatic final scoreline.

On Monday, Aston Villa blazed their way to a superb 3-0 win at Fulham before Liverpool capped game week three with a ruthless display in a 3-1 win over a sub-par Arsenal.

Let’s take a look at the players that we thought put in the best individual performances during the opening round of the new campaign in our first FST Premier League TOTW selection of the season: 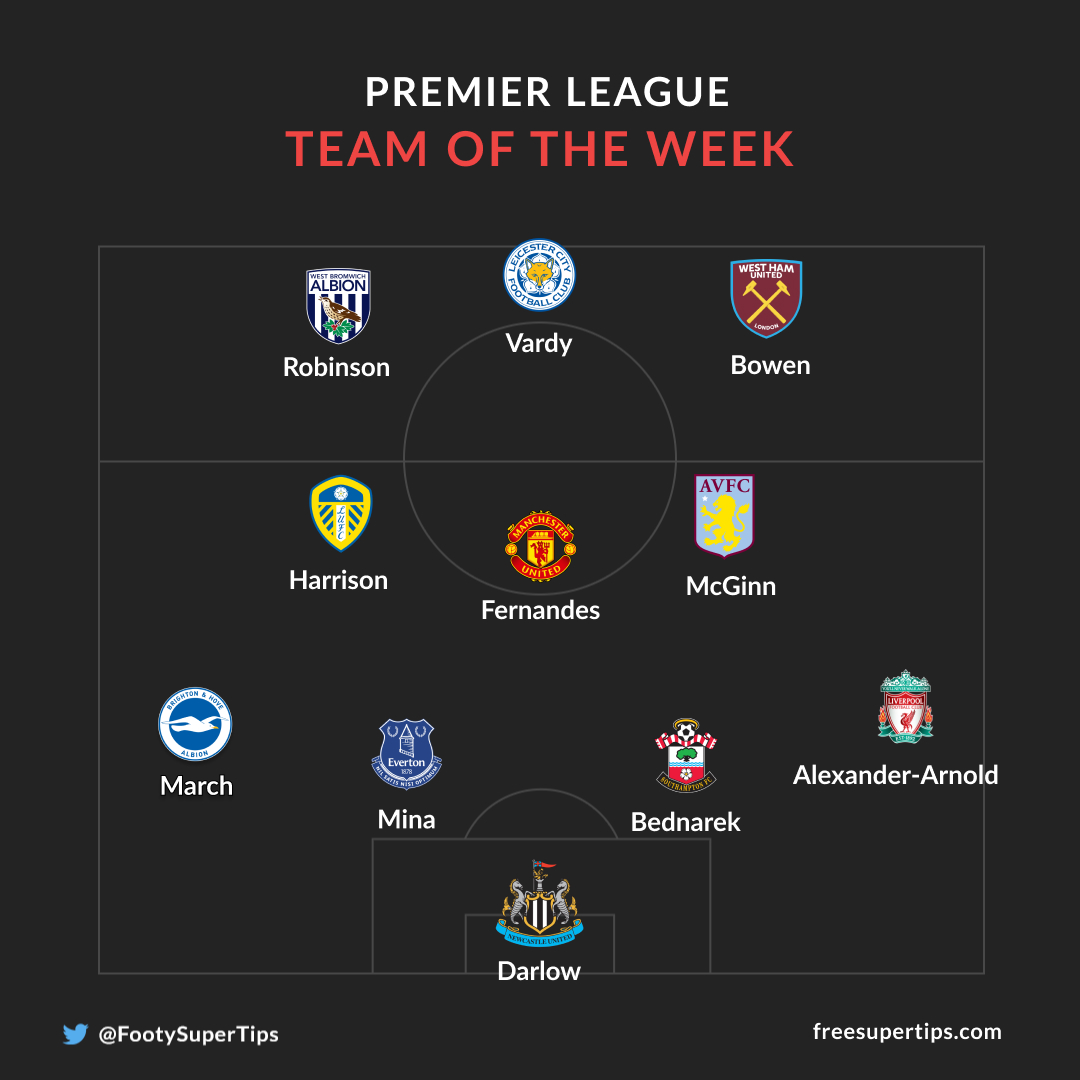 Magpies stopper Karl Darlow was in inspirational form between the sticks on Sunday, helping Newcastle to steal a hugely undeserved point away at Tottenham. In total, the 29-year-old made a palm-stinging 11 saves to keep a frustrated Spurs at bay in North London.

Trent-Alexander Arnold grabbed what is certain to be the first of many Premier League assists this season in Liverpool’s 3-1 win over Arsenal at Anfield on Monday evening. The Reds’ prime chance supplier set up fellow fullback Andrew Robertson from one of his seven crosses against the Gunners, and Alexander-Arnold played more key passes (three) than any other player involved on Merseyside.

Saints centre-half Jan Bednarek coped brilliantly at Turf Moor against Burnley’s patented aerial bombardment game-plan, helping Southampton to eventually carve out a 1-0 win against their hosts. Bednarek won a game high eight duels in the air, and cleared his lines an unbeatable 13 times against the Clarets overall.

With nine successful aerial battles and six clearances completed, giant Colombian defender Yerry Mina was a rock-solid performer for Everton on Saturday in the Toffees’ contentious triumph at Crystal Palace. Mina also completed 90% of his attempted passes during his well-rounded display.

Like the rest of his Seagulls teammates, Brighton’s Solly March was extremely unlucky to have finished on the losing side in Albion’s dramatic 3-2 reverse at home to Man Utd on Saturday. The left-wing back was a constant nuisance throughout, and having missed a succession of chances, the 26-year-old nodded home what he thought was an injury-time equalizer.

On a fantastic evening for Aston Villa at Craven Cottage, Scottish international John McGinn was their standout performer, and the all-action midfielder set up two of his team’s three goals in their 3-0 win over Fulham. Both of McGinn’s assists arrived in the opening 15 minutes of the contest, though his influence was strongly felt throughout.

Man Utd toiled for large swathes of their meeting with Brighton on Saturday, though their talismanic midfielder Bruno Fernandes delivered moments of quality when his team needed him most. The Portuguese schemer carved open Albion’s defence to set up Marcus Rashford for United’s second goal, before the 27-year-old dispatched a 99th minute penalty kick to win the points for the Red Devils.

Jack Harrison was Leeds’ midfield lock picker again on Saturday in his team’s impressive 1-0 win at Sheffield United on Sunday. The 23-year-old Man City loanee played five chance creating chances in total at Bramall Lane, one of which set up Patrick Bamford for the Whites’ 88th minute winner.

Jarrod Bowen added to his swelling reputation with two well taken efforts for West Ham in the Hammers’ excellent 4-0 win over a shellshocked Wolves in the capital on Sunday. Bowen scored in either half against Wanderers, showing a clinical edge to finish off two of this three attempts at the London Stadium.

Republic of Ireland international Callum Robinson had an afternoon to remember on Saturday after he notched two early goals for the Baggies in their pulsating 3-3 draw with Chelsea. Robinson made the most some early Blues rustiness to nab two goals inside the opening 25 minutes at the Hawthorns.

The evergreen Jamie Vardy just loves to punish the Premier League’s biggest names, and the Foxes’ veteran hitman helped himself to a hattrick in Leicester’s remarkable 5-2 win over Man City at the Etihad on Sunday. Vardy buried two penalty kicks either side of a beautiful 54th minute flicked finish to take his total for to campaign up to five goals after just three rounds of games.