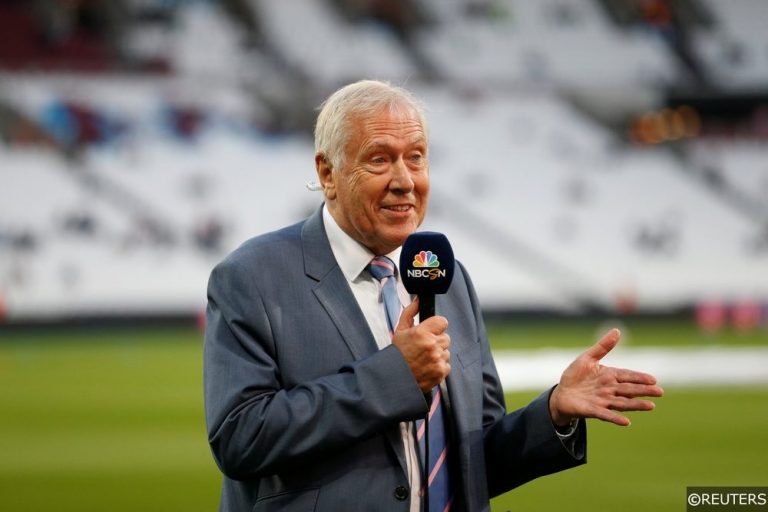 In the next part of our funny football quotes series, we focus on the men behind the mic and the peddlers of punditry.

If you haven’t read our collection of classic football quotes from coaches and managers in the first part of our series, you can check it out here.

Even though much of the commentary you hear can often be more inane than insightful, the good stuff when it arrives, can be iconic enrichments of magic moments.

Some of the most hilarious soundbites and best football quotes have also come from the men in the gantries and studios in stadiums across the world. You can read lots of them below.

“For such a small man, Maradona gets great elevation on his balls.”

The lad got overexcited when he saw the whites of the goalpost’s eyes.”

“He’s pulling him off! The Spanish manager is pulling his captain off.”

“That was only a yard away from being an inch-perfect pass.”

“The World Cup is a truly international event.”

“He’s not only a good player, but he’s spiteful in the nicest sense of the word.”

“They’ve picked their heads up off the ground, and they now have a lot to carry on their shoulders.”

“If history repeats itself, I should think we can expect the same thing again.”

“I’d love to be a mole on the wall in the Liverpool dressing room at half-time.”

“They’ve flown in from all over the world, have the rest of the world team.”

“The winners of the Champions League stand to make £10m in prize money – that’s before any money they can make on programme sales, hot dogs and the like.”

“It’s headed away by John Clark, using his head.”

“If ever the Greeks needed a Trojan horse, it is now.”

“And now that the formalities are over, we’ll have the national anthems.”

“Tottenham are trying tonight to become the first London team to win the cup. The last team to do so was the 1973 Spurs team.”

“And Seaman, just like a falling oak, manages to change direction.”

“It was the game that put the Everton ship back on the road.”

“The Uruguayans are losing no time in making a meal around the referee.”

“Madrid are like a rabbit dazed in the headlights of a car, except the rabbit has a suit of armour in the shape of two precious away goals.”

“There’ll be no siestas in Madrid tonight.”

“In some ways, cramp is worse than having a broken leg.”

“He’s showed him the left leg, then the right. Where’s the ball, the defender asks? It’s up his sleeve.”

“Jari Litmanen should be made compulsory.”

“The ball goes down the keeper’s throat where it hits him on the knees to say the least.”

“It slid away from his left boot, which was poised with the trigger cocked.”

“He had an eternity to play that ball, but he took too long over it.”

“John Arne Riise was deservedly blown up for that foul.”

“The Everton fans are massed in the Station End, and Lee Carsley is attacking those fans now.”

“The atmosphere here is literally electric.”

“Brazil – they’re so good it’s like they are running around the pitch playing with themselves.”

“The Arsenal defence is skating close to the wind.”

“They’ve missed so many chances they must be wringing their heads in shame.”

“Football’s football: if that weren’t the case it wouldn’t be the game that it is.”

“If there are any managers out there with a bottomless pit, I’m sure they would be interested in these two Russians.”

“Venison and Butcher are as brave as two peas in a pod.”

“Most of the players will be wearing rubbers tonight.”

“They’ve come out with all cylinders flying.”

“Fiorentina start the second half attacking their fans; just the way they like things.”

“It’s sometimes easier to defend a one-goal lead than a two-goal lead.”

“There won’t be a dry house in the place.”

“The candle is very much in the melting pot.”

“All the cul-de-sacs are closed for Scotland.”

“The club has literally exploded.”

“If Glenn Hoddle had been any other nationality, he would have had 70 or 80 caps for England.”

“You either win or you lose. There’s no in between.”

“He hits it into the corner of the net as straight as a nut.”

“This is a real cat and carrot situation.”

“Not only has he shown Junior Lewis the red card, but he’s sent him off.”

“Let’s just close our eyes and see what happens.”

“Every time they attacked, we were memorized by them.”

“You could visibly hear the strain in his voice.”

“The Belgians will play like their fellow Scandinavians, Denmark and Sweden.”

“Gary Neville was palpable for their second goal.”

“He’s got a knock on his shin there, just above the knee.”

“Now they have got an extra yard of doubtness in their minds.”

“Peter Beardsley has got a few tricks up his book.”

“Peter Shilton conceded five, and you don’t get many of those to the dozen.”

“Manchester United are looking to Frank Stapleton to pull some magic out of the fire.”