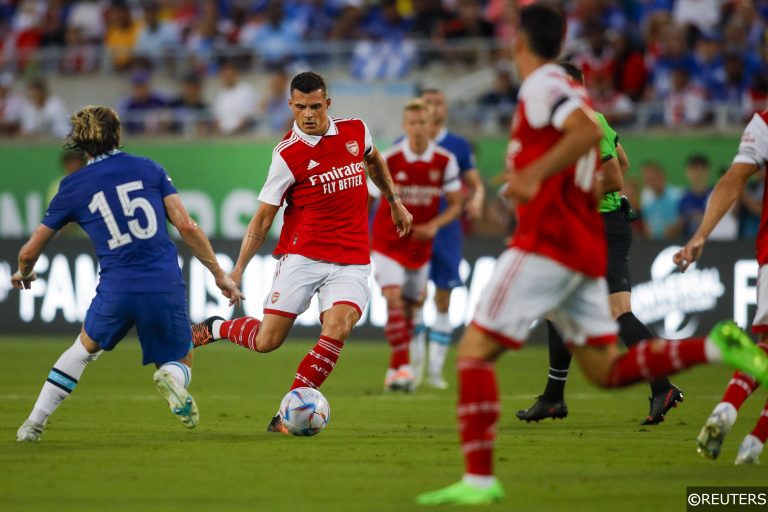 The North London derby is always a high-profile affair but will be even more so this season with Arsenal and Tottenham separated by just a point at the head of the Premier League table after impressing in the early part of the new campaign.

We’ve already covered the fixture in our dedicated Match Predictions section, and now we’ve put together this huge 44/1 Ultimate Bet Builder tip with four special bets – which you can back below.

Over 3.5 goals in the match

The North London derby tends to be a high-scoring affair, this fixture last season ended 3-1 to Arsenal, and with the attacking talent on display it would be no surprise to see another thriller.

Three of Tottenham’s seven Premier League matches have seen four or more goals and they were involved in an eight-goal spectacular last time out as they beat Leicester 6-2. A repeat of that result seems unlikely but these teams have netted 35 times between them in 14 games so far this season. As such, their respective defences look to have their work cut out and we should see plenty of goals.

Gabriel Martinelli to score at any time

Arsenal’s cultivation of its youth over recent years looks to be finally reaping rewards as Mikel Arteta’s squad, which has the youngest average age of any team in the Premier League at 24.5, sits at the top of the table after winning six of their first seven matches.

A key part of their early success has been Gabriel Martinelli, the 21-year-old has already netted three times this season and was somewhat unfortunate not to have scored a fourth after his fine counter attacking goal at Old Trafford was ruled out.

The Brazilian missed out on making his national team’s squad for their recent friendlies and this will only have further incentivised the youngster to perform with Qatar on the horizon, he is fancied to write his name into Gunners folklore in this clash.

Granit Xhaka to be shown a card

Granit Xhaka has been shown a card in seven of the last nine North London derbies and while he does seem to be relishing his new role and responsibilities in midfield under Mikel Arteta, he is still prone to giving away free kicks and attracting the unwanted attention of the referee.

The 30-year-old has been booked twice already this season and in this frenetic derby atmosphere, could end up with another.

Takehiro Tomiyasu to be shown a card

Oleksandr Zinchenko has impressed at left-back for his new side Arsenal after completing a summer move from Manchester City but the Ukrainian has been ruled out off the last few games with injury and looks likely to miss out again here.

Fellow left-sided defender Kieran Tierney picked up a potential concussion playing for Scotland in the international break so may be forced to play no part in this clash. In place of those two natural left-backs may come Takehiro Tomiyasu, who has seen his position at right-back taken by some impressive performances by Ben White.

While Tomiyasu doesn’t have eye-popping card numbers, he may be playing out of position and has already been in the book this season. Up against the tricky Dejan Kulusevski, the Japanese defender could fall foul of the referee.