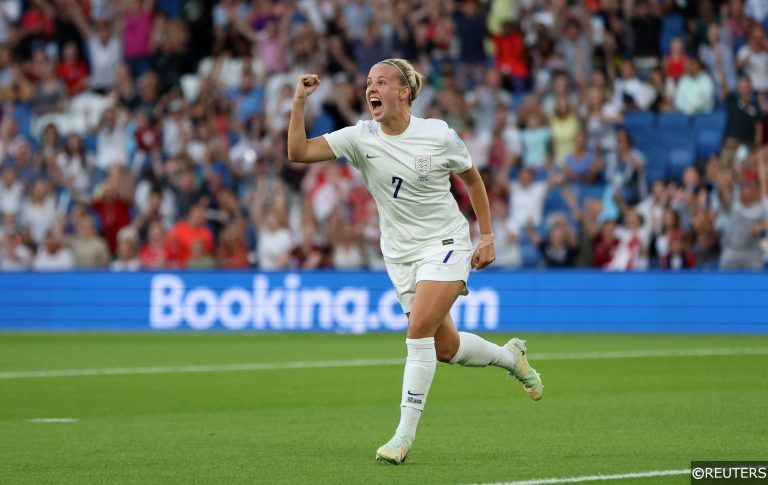 England are through to the Euro 2022 quarter-finals and they face a stern test against Spain in the last eight on Wednesday at the Amex Stadium in Brighton.

We’ve already covered the game in our Match Predictions and now we’ve put together a huge 97/1 four selection Ultimate Bet Builder tip as the Lionesses continue their bid for European glory.

Host nation England have been sensational throughout Euro 2022, winning all three of their games on their way to this last eight tie against pre-tournament favourites Spain. The Lionesses have scored 14 goals and are yet to concede themselves in this competition and they have now won each of their last nine games, conceding just twice in the process.

La Roja will be the best team Sarina Wiegman’s side have faced so far but they have the momentum to get the job done in 90 minutes. Spain lost to Germany in the group stages and have found goals hard to come by, scoring just once across their last two games, so an England win stands out.

England have been in free-scoring form in this tournament but Spain have a mean defence and goals could be at a premium. Spain have five clean sheets in their last nine games, conceding just five goals during that run, and it could take a moment of brilliance for the Lionesses to find a way through.

Lauren Hemp is one of the key creators in England’s team and she looks a good candidate to register at assist. The Manchester City star has one assists at Euro 2022 so far and managed six in the Women’s Super League for her club last season, and she could be the player to find a way through for England on Wednesday.

We may be anticipating an England win, but Spain may still be the team that enjoys the larger share of the possession and at a big price La Roja to win the corners match bet appeals.

Spain have taken more corners than their opponents in all three of their games so far, including in a 2-0 defeat to Germany, and have won a whopping 32 corners in total. England have won 17 corners across their three games – and lost the corners match bet 3-2 to Norway despite winning the game itself 8-0.

Irene Paredes to be shown a card

There haven’t been too many cards dished between these two sides but a booking for Spain skipper Irene Parades has a chance. Pardes has one booking at Euro 2022 and picked up three in 10 Champions League games for Barcelona last season, so if any player is to fall foul of the referee it may well be the 31-year-old.