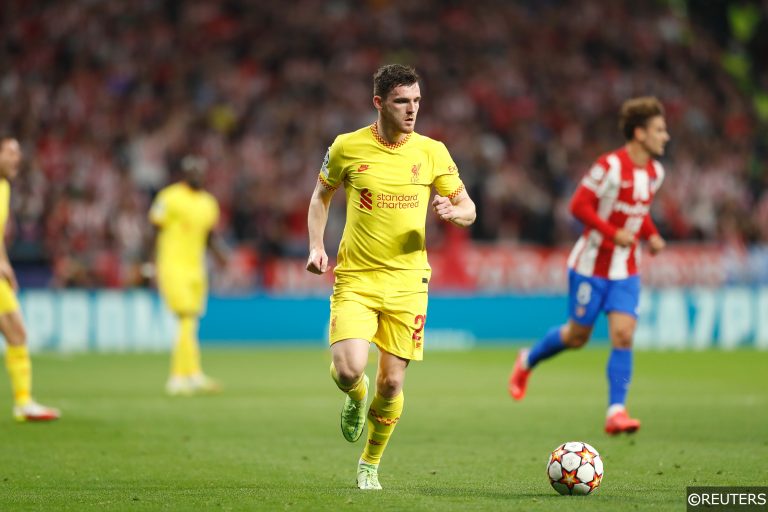 Chelsea splashed out a reported £62 million on Brighton full-back Marc Cucurella last week to make him one of the most expensive defenders in history.

Only time will tell if Cucurella is worth his blockbuster sum, but how about those players that definitely would be worth a £62 million fee? We asked our experts who the best left-back in world football is.

While there are talented left-backs throughout European football, the two best in the world to my mind ply their trade in the Premier League.

While Joao Cancelo and Andy Robertson provide different things to their teams I would have to lean toward the Liverpool man based on his energy and dynamism on the left flank.

The Scottish international has registered double figures for assists in three of the last four seasons and is also rock solid defensively while his seemingly limitless effort to get up and down makes him one of the key components in the success of Jurgen Klopp’s side.

My favourite left-back to watch is Bayern Munich dynamo Alphonso Davies, who already has a Champions League title under his belt at the age of 21 and could light up the World Cup for Canada later this year. But in terms of overall defensive and attacking contributions, it is hard to look past Andrew Robertson.

The Scotsman is one of the first names on the team sheet for a juggernaut of a club in Liverpool, who kept a division-high 21 clean sheets last season, and he is a natural leader at the back.

With Premier League, FA Cup, League Cup and Champions League titles to his name, it is hard to believe he is only 28 years old and if Marc Cucurella is fetching more than £60 million, Robertson should be valued at double that.

There is not much to separate the two but I’ll just go for Andy Robertson over Manchester City’s Joao Cancelo.

The Scotsman has to be one of the greatest transfer bargains of the last ten years and brings a great dynamism to Liverpool’s play down the left, regularly supplying great service to the fine array of Reds striking talent.

His quality in defensive duties shines through as well and, besides his talent, I warm to him due to the fact he has fought his way up from the Scottish lower leagues and is a huge advert for the power of hard work and self-belief. He’s an inspirational success story, not just for football but for life in general.

For me, Andy Robertson is the complete full-back. He sometimes gets overshadowed by Trent Alexander-Arnold but Robertson has almost matched his opposite number’s attacking output over the last four years and offers much more at the back.

He is a natural-born leader, has contributed 40 assists in the Premier League over the last four seasons and is instrumental to a Liverpool defence that concedes so few goals. Joao Cancelo deserves a special mention but Robertson is too well-rounded to ignore.

I’ll give a brief mention to Bayern Munich’s Alphonso Davies and Theo Hernandez of Milan, but in my mind the best two left-backs in world football are both playing in the Premier League – and, despite his fee, Cucurella isn’t one of them just yet.

In my opinion it’s a toss up between Joao Cancelo, who was arguably Manchester City’s most important player last season, and Liverpool counterpart Andy Robertson.

Scotland captain Robertson probably has a better delivery but Cancelo’s poise on the ball and adaptability give him a slight edge for me.

He does so much attacking that his defensive skills often get overlooked but he registered 59 interceptions to Robertson’s 23 last season, made more than double as many successful tackles (54 to 21) and won 31 more aerial battles (57 to 26) than the Reds man.

There isn’t much to separate Andy Robertson, Alphonso Davies and Joao Cancelo but for me the latter just about edges it. There is just a little more poise and finesse to Cancelo’s play when compared to the other two, and he looks comfortable whenever he is on the ball in any area of the pitch.

They all have different qualities and could rightly make a claim to be the best left-back in the world. However, Cancelo has won league titles in three different countries, and it is also worth noting that he was a right-back until he switched flanks at City and has gone on to make the left-back spot his own in arguably the best team in the world. Davies is still only 21 and has the potential to improve further but right now Cancelo gets my vote.

It all depends on what you want from a left-back these days, which tends to be someone that provides assists and chips in with goals, but, first and foremost, I want someone who can defend.

While Liverpool’s Andrew Robertson receives, rightly, huge credit, I prefer Bayern Munich’s Alphonso Davies, who has been developing at a rapid rate over the past couple of seasons.

The Canada international’s pace, dribbling and creativity make him the complete package and there is still lots more scope for improvement, given the fact he is only 21 years of age.

It’s difficult to look past Andy Robertson and Cancelo in terms of stats but it is worth noting that they play for the two best teams in England, perhaps Europe, and therefore have greater opportunities to impress offensively. Maybe I would side with Robertson on Planet Premier League, although Cancelo offers greater versatility.

Alphonso Davies could prove the best of the bunch in the long run, given his pace and trickery but needs more time to prove it, while Kieran Tierney has also not been dealt the kindest hand on the injury front – and is arguably the best already from a defensive viewpoint.

Raphael Guerreiro and Theo Hernandez are also worth a mention, with the latter’s goals helping AC Milan become a force once again.