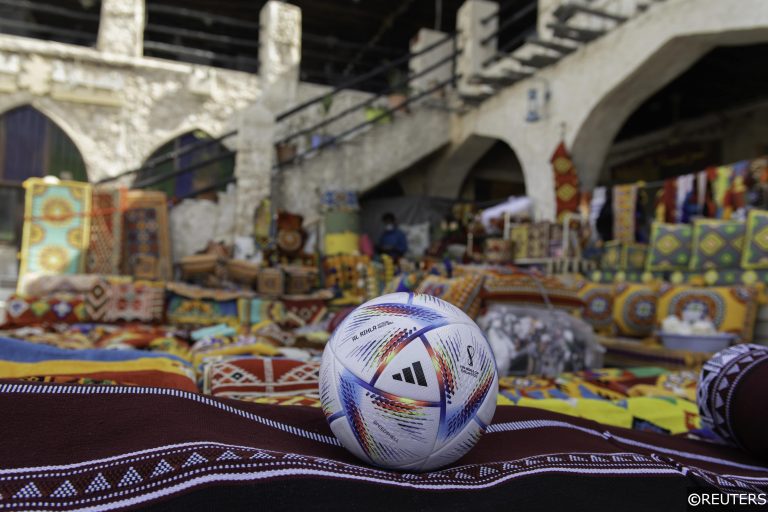 The World Cup is fast approaching so we rounded up our team of experts for their ‘dark horse’ picks ahead of Qatar 2022.

We asked for their potential winners outside of the top nine favourites – who are currently Brazil, France, Argentina, England, Spain, Germany, the Netherlands, Portugal and Belgium – and got a few interesting options, with one nation picking up three votes.

Senegal look the pick of the underdogs at 80/1 after their recent African Cup of Nations success.

They should have no problem getting out of a relatively soft Group A and given Netherlands’ inconsistency over the past few years it would not be a huge surprise to see them top the group, while they have the quality in their squad to both frustrate and trouble most teams.

Edouard Mendy, Kalidou Koulibaly and Abdou Diallo are the foundation of a solid defence, with Idrissa Gueye, Cheikhou Kouyate and Nampalys Mendy offering stopping power in the centre of the park and Sadio Mane providing the firepower up front. Aliou Cisse’s side can go well this winter.

Senegal have recent tournament form having won the Africa Cup of the Nations at the start of the year and appeal at the current prices.

The Lions of Teranga have been handed a favourable draw for the group stage, being placed in Group A alongside the Netherlands, Qatar and Ecuador, and should follow the Dutch into the last 16.

In the knockout rounds, Senegal have enough quality to trouble most sides. There’s a strong spine to Aliou Cisse’s side that starts with Edouard Mendy in goal and finishes with Sadio Mane up front.

Senegal have proven a tough nut to crack recently and that solid shape, combined with Mane’s quality in the final third makes them a side to be feared in Qatar.

I would keep an eye on Senegal, who are an interesting prospect at 90-1 in places to lift the trophy.

Winning their first ever Africa Cup of Nations at the start of the year should have done the squad the world of good and they have quality from back to front.

Edouard Mendy, Kalidou Koulibaly, Idrissa Gueye, Cheikhou Kouyate, Ismaila Sarr and Sadio Mane are just some of the experienced talents in their squad and they have been given a chance in Group A in which they should finish above Ecuador and hosts Qatar.

Manager Aliou Cisse knows a thing or two about defying expectations with Senegal, having captained his nation to the quarter-finals of the 2002 World Cup, and his side could enjoy another deep run in Qatar.

While many major European nations are struggling for form, Serbia have won four of their last five games. They can be backed as long as 100/1 to win the tournament, but they have bags of creativity which can cause problems for any side in Qatar.

With Aleksandar Mitrovic, Dusan Vlahovic and Luka Jovic as their three strikers Serbia have brilliant attacking options, with Dusan Tadic and Filip Kostic on hand to tee them up. While they have fewer household names at the back, they have players from Europe’s top five divisions across their side and with Portugal and Belgium their projected first two knockout opponents there’s a path for them to make a deep run.

There appears to be plenty of value in backing Croatia at around 50/1 to cause a surprise and go all the way in Qatar, having already upset the odds by reaching the final in Russia in 2018.

The Vatreni do give the impression they are something of an ageing side but that didn’t stop them four years ago and is reflected in the bigger price, while they have some good form to take into Qatar.

After coming off second best in an eight-goal thriller against Spain after extra time at Euro 2020, Croatia topped their qualifying group with seven wins and just one defeat in their 10 games, before they won their Nations League pool which included France and Denmark – both shorter in the World Cup betting – to reach the semi-finals.

While perhaps not quite as consistent as other sides, there is still plenty of big-game quality throughout the squad and they could be set for another deep run.

Denmark proved their major tournament credentials with their run to the semi-finals of the Euros and it is perhaps unfair to define them as dark horses given they have also won home and away against France over recent months in the UEFA Nations League.

The spine of the team that impressed at the Euros remains and a favourable World Cup draw that sees them face France again, Tunisia and Australia in Group D shouldn’t cause them too many problems.

If the Danes can repeat their trick of getting the better of France and topping the group then that could open the door for Kasper Hjulmand’s side to go far, and who knows, perhaps even lift the trophy aloft in Lusail on December 18.

South American outsiders in the mix

Denmark are the obvious candidates but their Euro 2020 exploits have had an impact on the price and, at 30-1, I’m happy to swerve the Danes in favour of Uruguay, who are on offer at a much more enticing 50-1.

Portugal will be favourites in Group H but Uruguay deserve to be odds-on to follow them out of the section thanks to a squad which includes Tottenham’s Rodrigo Bentancur, Liverpool’s Darwin Nunez and Real Madrid midfielder Federico Valverde.

There is hope that Barcelona centre-half Ronald Araujo will be fit and veterans Luis Saurez, Edinson Cavani and goalkeeper Fernando Muslera, among others, possess bundles of major tournament experience.

Brighton have put plenty of their eggs in Ecuador’s basket and I fancy their chances at a whopping 150-1 to raise a few eyebrows in Qatar.

Pervis Estupinan and Moises Caicedo have picked up plenty of admirers during their short spells at Brighton, while Jeremy Sarmiento is another Ecuadorian fondly thought of at the Amex Stadium.

Housed in a group alongside Netherlands, Senegal and hosts Qatar, it appears a straight shootout between La Tri and the African Cup of Nations champions as to who follows the Dutch out of Group A.

It’s 11-8 to be Ecuador who progress and their reward in the knockout stage could well be a showdown with currently out-of-sorts England, so a quarter-final spot is not beyond the realms of possibility for the South Americans.