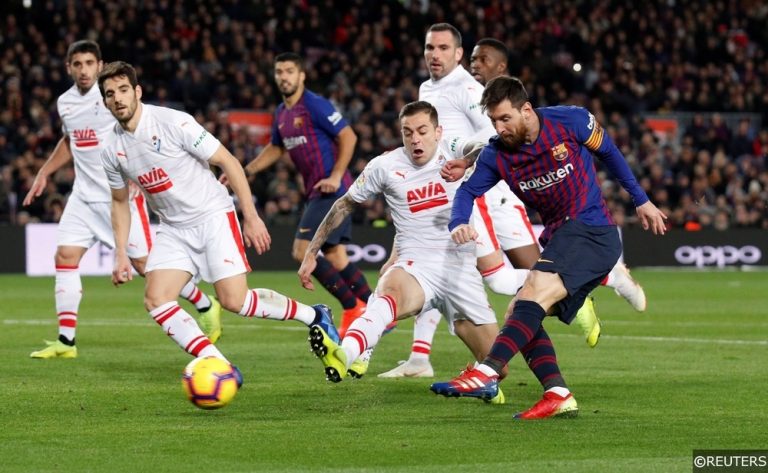 La Liga is now at the halfway stage after one of the most dramatic weekends of the season concluded with Dani Ceballos striking late to seal victory for a youthful Real Madrid side at the Benito Villamarin. Almost from the first whistle, it was a match-day full of drama and talking points with a hat-trick from Raul De Tomas kicking things off on Friday night to fire struggling Rayo Vallecano to a third straight win and add fresh intrigue to the battle at the bottom.

The weekend continued with a fresh milestone for Messi, a brilliant brace from Inaki Williams, a Real Madrid back five and more home misery for Valencia and Villarreal. While Barca do now hold a significant if not decisive lead at the top, there is a huge amount to fight for at both ends of the league over the next four months. Check out our mid-season La Liga predictions for an idea of how things may pan out.

There is little left to say about Lionel Messi that hasn’t been said already but that doesn’t mean his extraordinary achievements should be brushed over. Messi reached another major milestone this weekend, scoring his 400th goal in La Liga as Barcelona cruised to a 3-0 win over Eibar at Camp Nou.

Messi has long since taken the record as the top scorer in the Spanish top flight. Both he and Cristiano Ronaldo surpassed the previous figure of 251 goals, a record set by Athletic Bilbao’s Telmo Zarra in the 1950’s and one that stood for over half a century. That puts into some perspective just how exceptional the two great players of this generation have been. The fact Messi still has time to more than double the previous mark is absolutely ridiculous.

Despite that, Messi does have his critics and those who stubbornly refuse to accept his genius. One of the common accusations is that he is someone who racks up a lot of goals against the small teams and doesn’t produce so regularly on the biggest stages. The stats simply don’t back that up though. The teams he has netted most times against in La Liga are Sevilla, Atletico Madrid and Valencia, 3 of Barca’s 4 strongest domestic rivals over his career. He is also the all-time top scorer in El Clasico and for what it’s worth, has scored more Champions League goals against English clubs than any other player.

Real Madrid had just 26% possession against Real Betis — their second-lowest share since records began and the first time they have been below 30% against a team other than Barcelona.

On another weekend, Messi would have hogged the headlines but a remarkable game at the Benito Villamarin on Sunday night provided a whole host of talking points. Most centred around Santi Solari’s tactics and team selection.

Real Madrid fielded three centre-backs in the game with Nacho coming in to a system which quite genuinely represented a back five whenever Real Betis had the ball. That was the case most of the time as Los Blancos had just 26% of the ball, their lowest possession figure since 2011. Despite that, they were far the more threatening team before the break as Solari’s masterplan largely succeeded with Real a big threat on the break with the pace of Vinicius a constant worry for the hosts. It was not just the style but the personnel that Solari selected that raised eyebrows. Marcelo and Isco remained on the bench for the duration of the game while youngsters Fede Valverde, Sergio Reguilon, Cristo Gonzalez and new boy Brahim Diaz all featured.

Betis did increasingly start to boss the game after the break with Sergio Canales cancelling out Luka Modric’s first half strike. However it was another Real Madrid youngster who sealed the win late on for the visitors. Dani Ceballos, returning to the club where he progressed through the youth ranks into the first team, was jeered by Betis fans on his introduction with just 15 minutes to play. The 22 year old was visibly upset by the reaction but would have the last laugh as he fired in an 88th minute free-kick to secure a hard-fought victory for the visitors, who sneak back into the top four and remain hanging on to slim title hopes.

It has been an eventful season so far in Bilbao. The appointment of Eduardo Berizzo failed to come off and he was replaced by Gaizka Garitano in December with the club languishing in the drop-zone and in danger of a first ever relegation. However the new man has already sparked a major turnaround. Athletic’s 2-0 victory over Sevilla this weekend makes it 11 points from 5 games under Garitano. The Basques are now just 4 points off 7th, which is usually good enough for European qualification, assuming one of the big guns wins the Copa del Rey.

Their star this weekend was Inaki Williams, a player who had remarkably gone over two years without a home league goal heading into the match. Not since December 2016 and a victory over Eibar had Williams netted at San Mames with each of his last 15 league goals coming away from home. However the 24 year old made amends with a fine brace on Sunday to sink Sevilla. His second was a memorable strike which saw him break from inside his own half to seal a league win over a side that had won at San Mames just three days earlier in the Copa Del Rey.

@mundodeportivo :
Following a meeting with @valenciacf club owner in Singapore, Marcelino’s dismissal has been ruled out for the time being.
This season in @LaLigaEN :
10th place
4 Wins
11 Draws
4 Losses#OnTheGrill pic.twitter.com/DyWfz7cCJX

If things are looking up for Athletic, the same can’t be said of Valencia and Villarreal. They have been part of a trend that has seen fancied teams struggle at home this season in La Liga and that continued this weekend for both sides from the Valencian Community.

Villarreal suddenly find themselves down to 19th and 4 points from safety after they were beaten 2-1 at home by Getafe on Saturday. All three goals were scored by Getafe players with a Leandro Cabrera own goal levelling the scores at 1-1 before Angel struck late to win it for the high-flying visitors. The Yellow Submarine have taken just 7 points from their 10 home games this term, a dreadful return for a side of their quality.

They’ve already sacked their coach and if rumours are to be believed, Valencia may do likewise in the non too distant future. Marcelino has come no closer to changing their fortunes with the latest blow coming in the shape of a 1-1 home draw with Valladolid this weekend. Los Che are the division’s joint lowest scorers but may look to move in the transfer market this month after they opted to end Michy Batshuayi’s loan early, with the Belgian set to join Monaco until the end of the season.