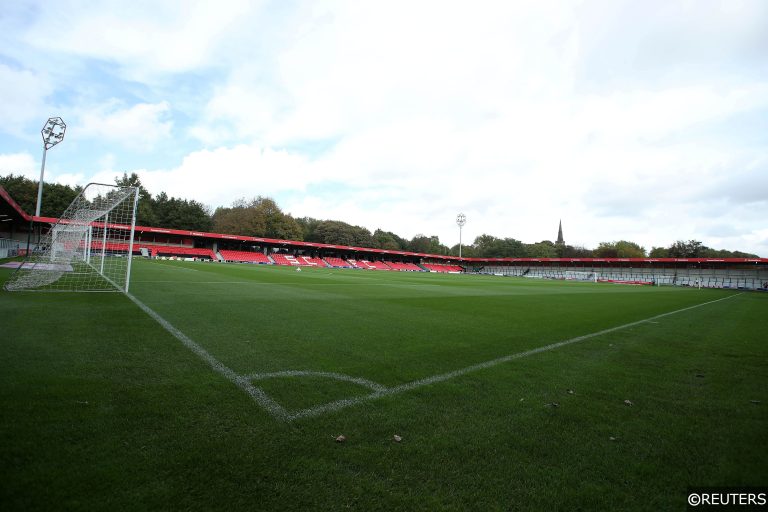 Away from the glitz and glamour of the Champions League, there is another hefty dollop of EFL action to consume on Tuesday, where there is a raft of exciting looking League One and League Two fixtures to look forward to.

As always, FST has been deep diving through the stats and to pull out some of the top League One and League Two predictions and best bets this week, and below you can find six of our favourite selections for Tuesday alongside our mammoth 26/1 EFL acca!

When you are finished reading below, head on over to our match predictions page where you’ll find loads more betting tips for Tuesday’s games.

Bradford’s eight-match unbeaten run under the caretaker stewardship of Mark Trueman and Conor Sellars finally came to an end in a 3-2 reverse at Exeter last time out, though the Bantams should still have enough momentum left over to trade blows with playoff chasing Morecambe on Tuesday.

The Shrimps have looked a little suspect on the road, and they swapped goals with their hosts in six of their last eight away assignments since October. Expect that pattern to continue at the Utilita Energy Stadium when they take on a dangerous Bradford outfit.

Bristol Rovers vs Portsmouth (League One)

Bristol Rovers are clear of the drop zone by goal difference only ahead of their clash with promotion hopefuls Portsmouth, and having failed to win any of their last eight matches, the Pirates look ill-equipped to plunder points this week.

Kenny Jackett’s Pompey have lost just once away from home all season, and if they are to make a concerted push for an automatic promotion berth, these are the types of fixtures they need to win.

Ipswich Town vs Northampton (League One)

After yet another postponement at the weekend, Ipswich have slipped further off the pace in the playoffs, and with ground to make up, a victory for the Tractor Boys against relegation candidates Northampton is a must.

The Cobblers’ confidence was dealt a massive blow when they lost to bottom club Burton Albion in their last runout, and Northampton, who have notched just once in seven League One fixtures, look beatable again at Portman Road.

Salford City made a major statement of intent in their last League Two assignment when they hammered leaders Cambridge United 4-1 at the Peninsula Stadium.

The Ammies have been playing some exiting football under Richie Wellens of late, and they should have the self-belief to push forward in numbers against second from bottom Barrow on Tuesday. Backing the hosts to get goals again looks the smart play here.

A meagre haul of one point from their last three games has hit Crawley’s playoff hopes hard, and Town could struggle again when an improving Stevenage team visit the Broadfield Stadium on Tuesday.

Stevenage have lost just four of their last 15 league games, and with January signing Luke Norris’s influence on the rise and key creator Tom Pett revelling in a more advanced roll, Boro can avoid defeat again.

Gillingham vs Peterborough (League One)

A resurgent Gillingham have left their ropy festive period performances behind, and their excellent 3-2 victory at Charlton last time out enhanced an improving record that now reads just one defeat in six.

Peterborough had the weekend off after their game against Blackpool was postponed, though their poor showing on the road in recent months suggests they might not be able to take advantage of their extra rest. The Posh dropped points in six of their last seven away tests, and they could let more slip through their fingers against a Gillingham team on the rise.

You can combine our League One and League Two best bets selections into one 26/1 accumulator using the banner below!

Best daily football on TV this week (with 64/1 accumulator)

Champions League outright predictions: Bayern favourites to defend their crown (plus 74/1 Round of 16 acca!)