The Manchester derby is no longer a title showdown following Man City’s incredible form, but there’s still a lot on the line when these two sides clash at the Etihad on Sunday.

This is arguably City’s biggest test in their impressive 21-game winning streak. Adding to that run over the local rivals would be the cherry on top of a fantastic run, while it would also take them 17 points clear at the top of the Premier League table.

Given the hype ahead of this clash between the top two, it’s the perfect fixture to build your own same-game multi bet. To help you out, you can find our bet builders cheat sheet here alongside our 33/1 #OddsOnThat prediction.

We’re going to look in depth at the Manchester derby below while you can see more analysis of the game over on our match predictions page.

All but the most ardent United fans would admit that this managerial battle is a mismatch on paper. Pep Guardiola is the managerial talent of his generation, while Ole Gunnar Solskjaer’s ability continues to divide opinion.

Despite that, the Norwegian could make history this weekend. He’s had a brilliant record in head-to-head encounters with Guardiola so far and Solskjaer could become the first manager in Manchester United’s history to win each of his first three visits to City.

These two have met on seven occasions since Solskjaer took charge, with five away wins overall in those games. However, the tide has turned towards City of late, with Guardiola’s side claiming a 0-0 draw at Old Trafford in the league and winning 2-0 there in the EFL Cup.

United’s 0-0 draw with Man City was no outlier, that result sums up their record against the league’s biggest sides this season. They’ve drawn six of eight clashes against City, Liverpool, Leicester, Tottenham, Arsenal and Chelsea in the league this term.

United tend to make life difficult for the opponents in these big clashes, which looks like it’s taken a toll on their own forward line. The Red Devils have conceded just 0.29 goals per game against those six sides, compared over a goal per game against the rest.

Solskjaer’s early reign at United saw him pegged as a tactical novice, but this season he’s successfully shut down some of the most impressive attacking setups in the league. He’ll be out to do the same at City, but that’s likely to be his biggest test since taking charge at Old Trafford.

While United have impressed in big games, City have been taking all comers of late. The Citizens’ 21-game winning run is an English record. It almost arrived out of the blue, as we had the most open title race in years in prospect before City took off with an unmatchable streak of form.

City have won each of their last 15 Premier League games, scoring 38 times and conceding just five in return. In that time, they’ve won twice as many games as any other side. It’s that brilliant form which sees City come into this one as heavy favourites with the bookies. 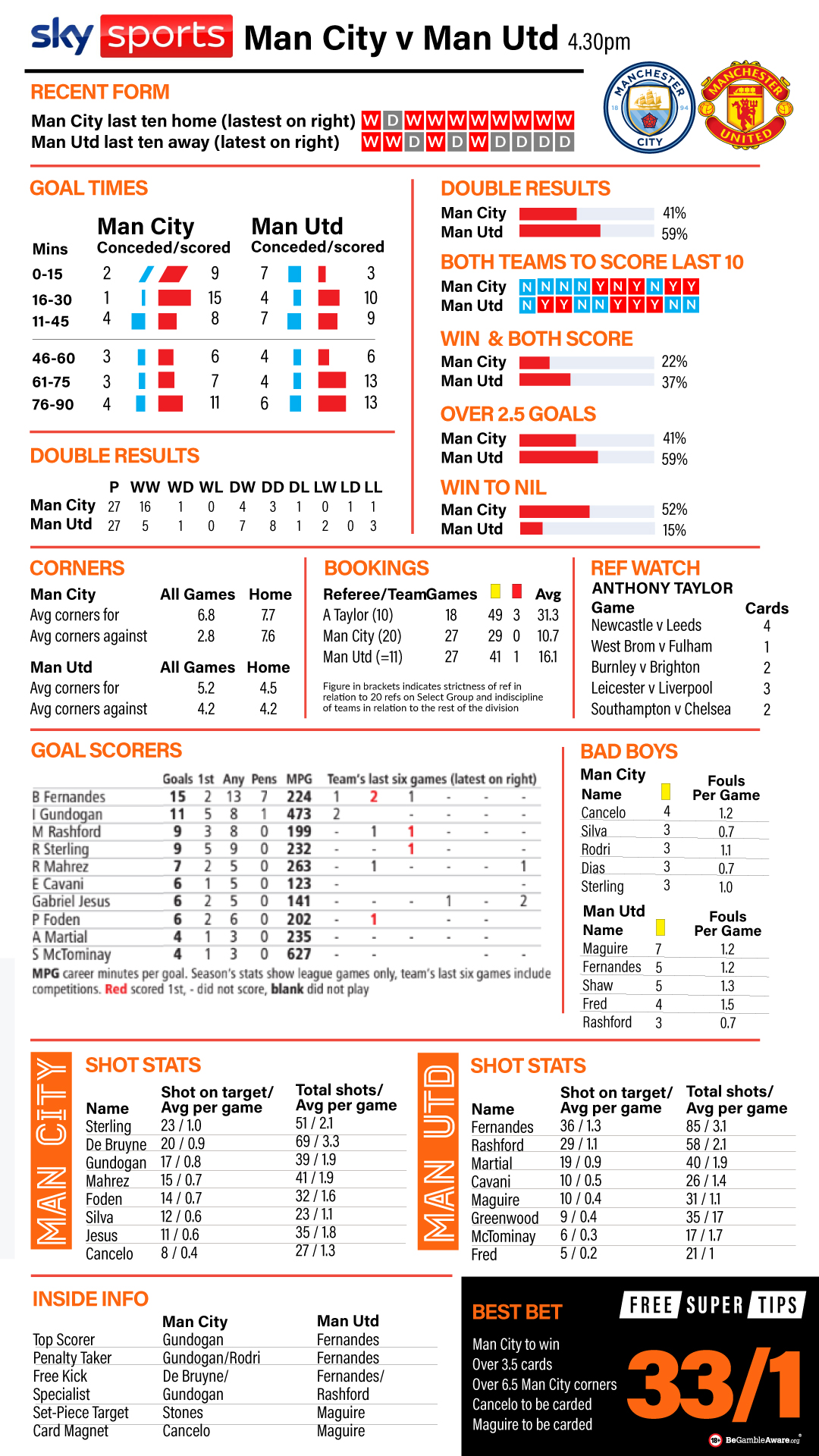