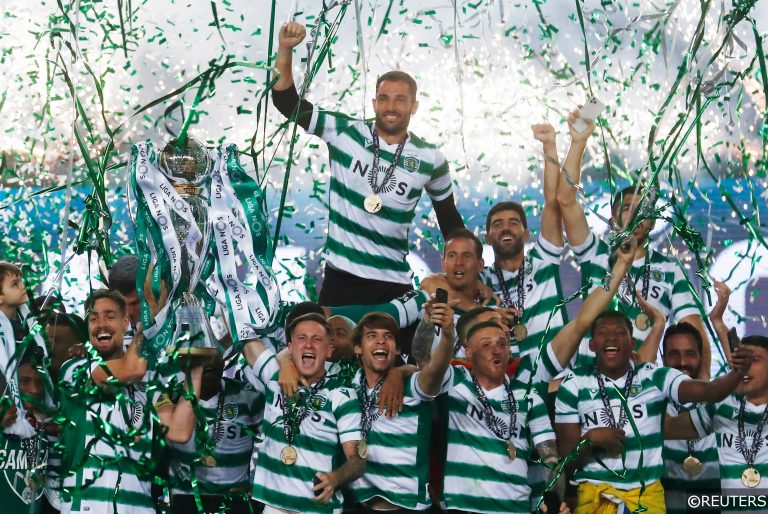 The finale to the 2020/21 club football season across Europe is rapidly approaching, though there is still plenty to play for despite the campaign’s dwindling number of fixtures.

Earlier this week, we took a closer look at how things might pan out in the title tussles, European qualification quests and relegation battles in some of the major leagues outside England, however, today we’ve turned our focus towards some of the other domestic competitions across the continent.

Remember – we’ll be covering the final exchanges of the 2020/21 campaign over on our match predictions and free football tips pages.

Title Race: Sporting CP won their first Primeira Liga title since 2002 this week when they beat Boavista 1-0 in Lisbon. Rúben Amorim’s youthful team are on course to finish the season unbeaten.

Champions League: FC Porto and Benfica will finish in the Champions League qualification places in second and third, though they could still swap positions before the campaign finishes. The team that finishes third will have to play qualifiers to reach the tournament proper.

Conference League: Sporting Braga and Pacos de Ferreira will finish fourth and fifth this season respectively, putting them into the Conference League qualifiers in late summer.

Relegation: Rock bottom Nacional have already been relegated, while second from bottom Farense need to overturn a three-point deficit in the final two rounds of fixtures to avoid the drop. Boavista currently occupy the relegation play-off position just above them, while Rio Ave are just a point better off.

Title Race: Ajax have been crowned as Dutch champions for the second time in a row and the 35th time in their history. The Amsterdam giants are once again streets ahead of the chasing pack.

Champions League: Ajax will be joined in next season’s Champions League pre-qualifiers by either PSV or AZ Alkmaar who are separated by just one point in second and third spot respectively ahead of the final two fixture rounds of the campaign.

Europa League: Whoever misses out on second spot between PSV and AZ will be handed a Europa League place as a consolation price.

Conference League: The teams currently placed from fourth to seventh – Vitesse, Feyenoord, Utrecht and Groningen – will compete in a series of playoffs to enter the qualifying rounds of the Conference League.

Relegation: Two from ADO Den Haag, VVV, Emmen, Willem II and RKC Waalwijk will go down, while one of the relegation candidates will face a do-or-die playoff to save their skin. ADO Den Haag and VVV currently occupy the two automatic relegation places.

Title Race: The Belgian season has entered its Championship Round where the four top clubs in the division playoff for the title and the most lucrative European football qualification places. Club Brugge are the currently leaders, but Genk, Antwerp and Anderlecht are, mathematically at least, all still in with a shot at glory.

Europa League: KV Oostende, Standard Liege, Mechelen and Gent are competing in the Europa League Play-Off round of the Belgian campaign, and after a league format, round-robin between the teams, the side finishing at the summit will claim a Europa League play-off spot.

Relegation: One club will drop out of the Belgian First Division A automatically if they finish last, while the second worst team will be placed into a relegation play-off. Excelsior Mouscron are currently bottom of the pile with Waasland-Beveren just ahead of them. Cercle Brugge are five points further up in 16th.

Title Race: Zenit St. Petersburg sealed top spot on May 3 to claim their third Russian Premier League title in a row. The Zenitchiki will enter the Champions League group stage next season as a result.

Champions League: With a three-point advantage and a +10 better goal difference ahead of the final matchday of the season, Spartak Moscow will beat local rivals Lokomotiv to second place in Russia, sealing a space in the Champions League qualification rounds in the process.

Conference League: Four clubs face a final day skirmish for the two Conference League qualification places however. Lokomotiv Moscow, Rubin Kazan, Sochi and CSKA Moscow all still have a chance to finish their campaign on a high on Sunday.

Relegation: Tambov have been comfortably the worst team in the Russian top-flight this season and are firmly stuck to the foot of the table. They will be joined in the second-tier by one of Rotor Volgograd, Ufa or Arsenal Tula. Two of those sides will escape automatic demotion, though a relegation play-off decider awaits for both.

Title Race: The Turkish Super Lig season concludes on Saturday when a trio of different clubs – Besiktas, Galatasaray and Fenerbahce – will compete in a three-way shootout for the title. Besiktas lead the way into the final round of fixtures by goal difference, though a hugely dramatic evening is in store in Turkey.

Champions League: The title winner in Turkey is guaranteed a place in the Champions League group phase, while the runner up enter the tournament pre-qualifiers later in the summer.

Europe League: Whoever misses out on a place in the two top will face a Europa League qualification test ahead of next season, as will Trabzonspor who are guaranteed to finish fourth.

Relegation: Denizlispor have already been relegated, though remarkably as have fourth from bottom BB Erzurumspor – who have already played 40 times this season and cannot climb to safety. Genclerbirligi are also as good as gone due to their dreadful goal-difference, though Ankaragucu could still escape if they win on the final day of the season and Kayserispor lose.

Eight of the best free transfers of all time