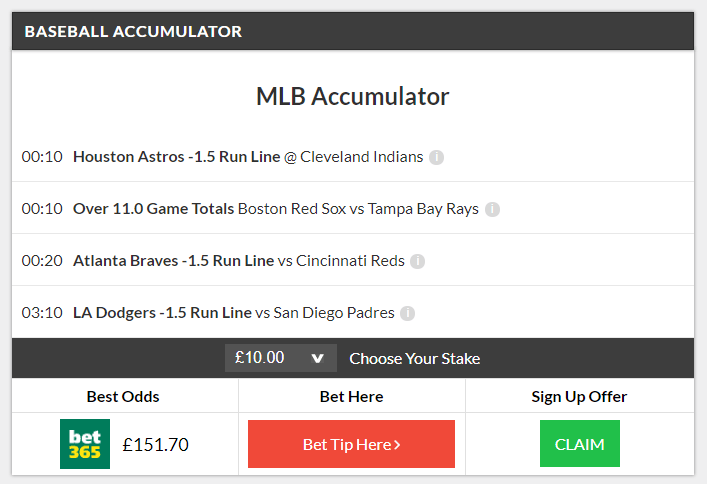 Just five days after our huge 47/1 MLB Mega Accumulator landed on Sunday, our baseball analyst has gone and done it again! … this time with a more modest winner.

… and waking up to a 6/1 MLB Acca winner isn’t too bad either! pic.twitter.com/UZOdezr5MX

Our accumulator started in Cleveland, as the travelling Houston Astros took on the Indians. We went for the visitors ‘-1.5 handicap’ in this one as they rank 8th in the MLB for runs scored, 12 places higher than the Indians. And the Astros didn’t let us down. Gerrit Cole pitched one-run ball over seven innings and extended his winning streak to a career-best nine games as the Astros beat the Indians 7-1.

Next up we were looking at runs in the Rays @ Red Sox game… and it didn’t take long for this one to get going. We were half-way on route to the 11 game totals line after just two innings, but then things started to dry up. It took until the bottom of the 5th innings to get any more runs on the board, and once the Rays started dominating the game, the leg sailed in not long after.

For our third leg, we needed the Atlanta Braves to beat the Cincinnati Reds by two runs or more. Braves got off to a great start in this thanks to Freddie Freeman’s three-run homer in the first innings, however, as the game went on, it was evident that the poor weather conditions were not going to improve, so the game was shortened. Most bookmakers ‘voided’ this leg of our accumulator reducing the price from 14/1 to 6/1.

Finally, our attention turned to the last and latest game of the night. We’d backed the LA Dodgers to win at home to San Diego Padres. This was a more uncomfortable affair with the LA Dodgers unable to get in front until the bottom of the 6th when Smith hit his first career grand slam to put the Dodgers 6-2 ahead. Two more runs in the 7th all but put the game to bed and the Dodgers held out 8-2 to land our MLB accumulator!

@FootySuperTips nice one mate , shame about the void match pic.twitter.com/99a3ZAd35N