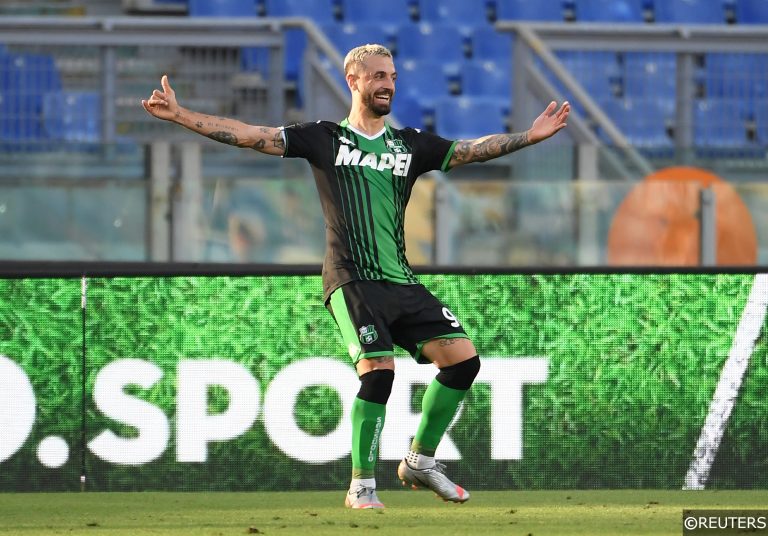 One of the most fascinating aspects of international football is witnessing an uncapped player pull on his country’s colours at senior level for the first time.

Whether it’s a promising up and comer or a seasoned late bloomer forcing his way into the reckoning, a new face lining up for his country can add an extra layer of excitement to proceedings.

In the Nations League this week, dozens of players across the continent will be hoping to make their first, tentative steps towards national team stardom.

With that in mind, here’s our rundown of some of the most exciting uncapped players hoping to make their senior international bow this week.

Remember – we’ll be covering all of the action with detailed match previews and expert betting tips on our Nations League predictions page.

The remarkably ambipedal forward Mason Greenwood established himself as a first-choice pick in Ole Gunnar Solskjaer’s Manchester United attacking trident at the back end of last season, and the 18-year-old’s stellar goal-scoring performances caught the eye of England boss Gareth Southgate.

The United academy graduate, who notched an impressive 17 goals in his first, breakout campaign at club level, was drafted in the Three Lions ranks by Southgate for England’s games against Iceland and Denmark – and Greenwood can expect to see minutes against both.

Fresh from starring in Liverpool’s narrow Community Shield defeat to Arsenal at the weekend, 19-year-old Liverpool full-back Neco Williams can look forward to a first international foray with Wales later this week.

The Wrexham-born defender should find breaking into Ryan Giggs’ youthful Dragons ranks on a regular basis a touch easier than ousting Trent Alexander-Arnold at Liverpool, and Williams will be targeting an appearance against either Finland or Bulgaria in the Nations League.

Spain boss Luis Enrique looks as though he is attempting to usher in a new era with La Roja, as evidenced by his decision to call up a raft of uncapped players for the country’s Nations League games against Germany and Ukraine.

Eric Garcia, Sergio Reguillon, Mikel Merino, Oscar, Ansu Fati and Ferran Torres are among those hoping to make their debut this week, though the most compelling inclusion is arguably Wolves winger Adama Traore.

The 24-year-old Wanderers flier, has represented Spain at various underage levels, though the ex-Barcelona starlet’s call-up to the senior fold was largely unexpected.

The technically gifted schemer made waves on social media with a stunning goal for his club in their Ligue 1 triumph over Montpellier over the weekend, and belief is strong in Les Blues camp that Camavinga can make a similar impact against either Sweden or Croatia over the next week.

The versatile Florian Neuhaus was a key performer for Borussia Monchengladbach in the Bundesliga last season, helping Die Fohlen to an impressive Champions League securing fourth place finish for 2019/20.

The 23-year-old, who can be deployed in a variety of roles in midfield, should add a lot of value to Joachim Löw’s Die Mannschaft squad, and Neuhaus will hope to put his extensive skill-set to good use against either Spain or Scotland this week.

PSV Eindhoven’s teenage prodigy Mohamed Ihattaren is considered one of the most exciting attacking talents to emerge in the Eredivisie in recent seasons, and the 18-year-old will hope to make his Oranje debut this week against either Poland or Italy.

Blessed with explosive acceleration, quick feet and an eye for a defence splitting pass, Ihattaren is an attacking midfielder with all the attributes required to make it to the very top. The PSV sensation is definitely one worth keeping an eye on in this week’s Nations League fixture programme.

Fresh from a hugely productive campaign for Sassuolo, where he notched 21 goals in 37 games, veteran hitman Francesco Caputo looks like making the latest of international breakthroughs this week.

The 33-year-old’s displays in the final third for the Neroverdi were rewarded with a call-up to the Italy squad by Roberto Mancini, and Caputo is in line to pull on the famous Azzurri colours against either Bosnia and Herzegovina or the Netherlands in the Nations League.

Exciting wide-attacker Jeremy Doku was a somewhat surprising inclusion in the Belgium squad for their Nations League games against Denmark and Iceland this week, though the 18-year-old could make a real splash if unleashed by Roberto Martinez.

Doku has been thrilling Anderlecht supporters with his searing pace down the flanks at club level, and having been with the Paars-wit since he was 10, the attacker, who made his First Division A debut at 16, looks certain for a lengthy career.

Ex-Braga forward Trincão completed his move to La Liga behemoths Barcelona this summer, and the 20-year-old could complete whirlwind few months by making his debut for Portugal against either Croatia or Sweden this week.

Primarily fielded as a right winger, Trincão combines creativity from wide positions with a killer touch in front of goal, and having exploded on to the scene in the early parts of the 2019/20 season, Barcelona moved quickly to sign the promising attacker for around €30m in January, in a deal that allowed him to remain with Braga until the summer.

In a Portugal squad loaded with top-class attacking midfielders, Trincão might have to be patient this week as he waits for an opportunity to shine, though the former Porto youngster has the talent to grab his chance with both hands when it arrives.