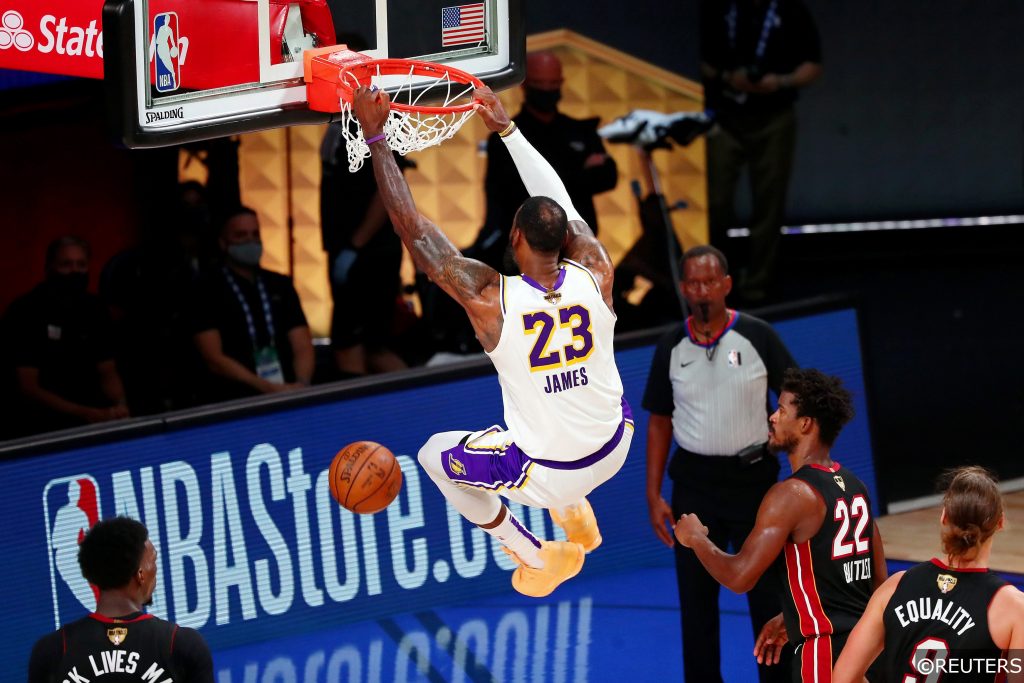 Just 71-days after the 2019/20 campaign finished in Disney World Orlando, the NBA returns from its shortest offseason in history. Tuesday marks the tip-off of the 2020/21 campaign as the Los Angeles Lakers seek to defend their title.

The Lakers haven’t stood still and impressive trades make them the side to beat going into the new campaign. However, the potential resurgence of the Golden State Warriors and a new-look Brooklyn Nets join last season’s contenders in a shortened 72-game season.

Ahead of the new season getting underway, we’re looking at the main betting markets and picking out our NBA outright tips. 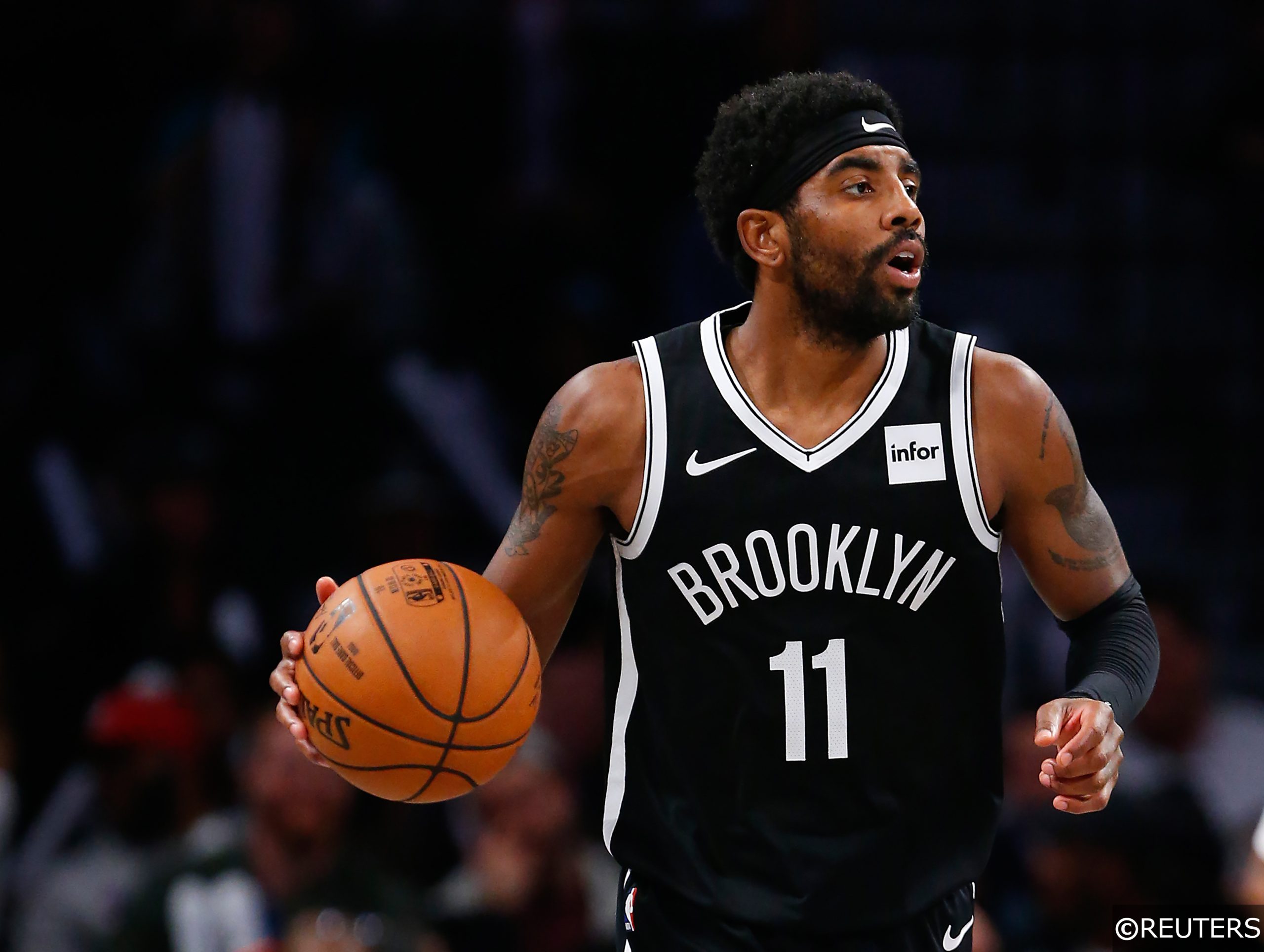 The Eastern Conference is widely regarded as an easier ride than the West, given the number of poor teams who sit towards the bottom. While that’s still true, there’s an argument to be made that the top of the East is deeper and more open this season.

Of the seven title favourites, five come from the East. The Milwaukee Bucks, Boston Celtics, Miami Heat, Philadelphia 76ers and the Nets are all threats, according to the bookies.

Kyrie Irving and Kevin Durant will finally play together in Brooklyn, despite joining in the summer of 2019. While that’s a boost to the Nets, these big name team-ups rarely click from the start, especially under an inexperienced coach.

The Bucks have to shake a reputation as playoff bottlers. They may have Giannis Antetokounmpo tied down, but failure to strengthen around him could cost them. The Heat tailed off last season before Jimmy Butler carried them to the Finals, while the 76ers’ minor improvements have barely moved the needle for them.

That leaves us with the Boston Celtics, a side who took another step forward in the Bubble. Their run to the Eastern Conference Final was clear progress for a young side who are incredibly promising. We think they can go one further this time around and win the East. 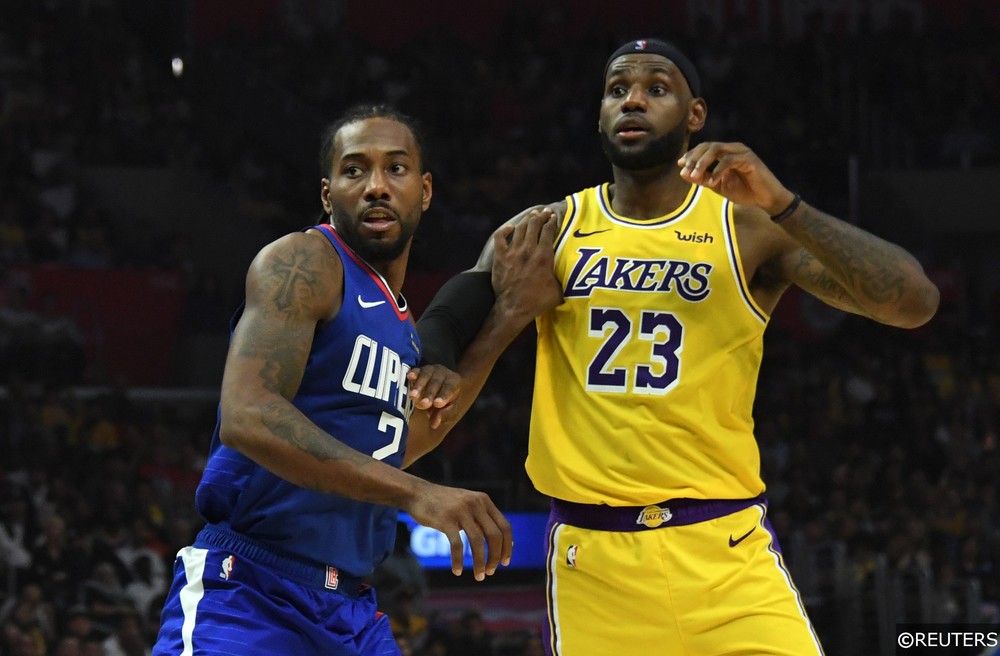 With the Dallas Mavericks sitting at 12/1 third-favourites, it just shows how far ahead the LA teams are in the West. The Clippers are around 3/1 to build on a season which went well until a collapse against the Denver Nuggets, but reports of a divide within the camp are a concern.

While many focus on the Clippers blowing their chances last season, they’d still have likely lost to a Lakers side who were strong during the playoffs. The talk of the 2019/20 campaign needing an asterisk proved to be nonsense, as the Lakers had to put up with more than most champions to claim the crown.

Having strengthened this term – including landing the Clippers’ Sixth Man of the Year winner Montrezl Harrell – the Lakers look even better. Adding Harrell, Dennis Schroder and Marc Gasol should see the Lakers win the Western Conference again. 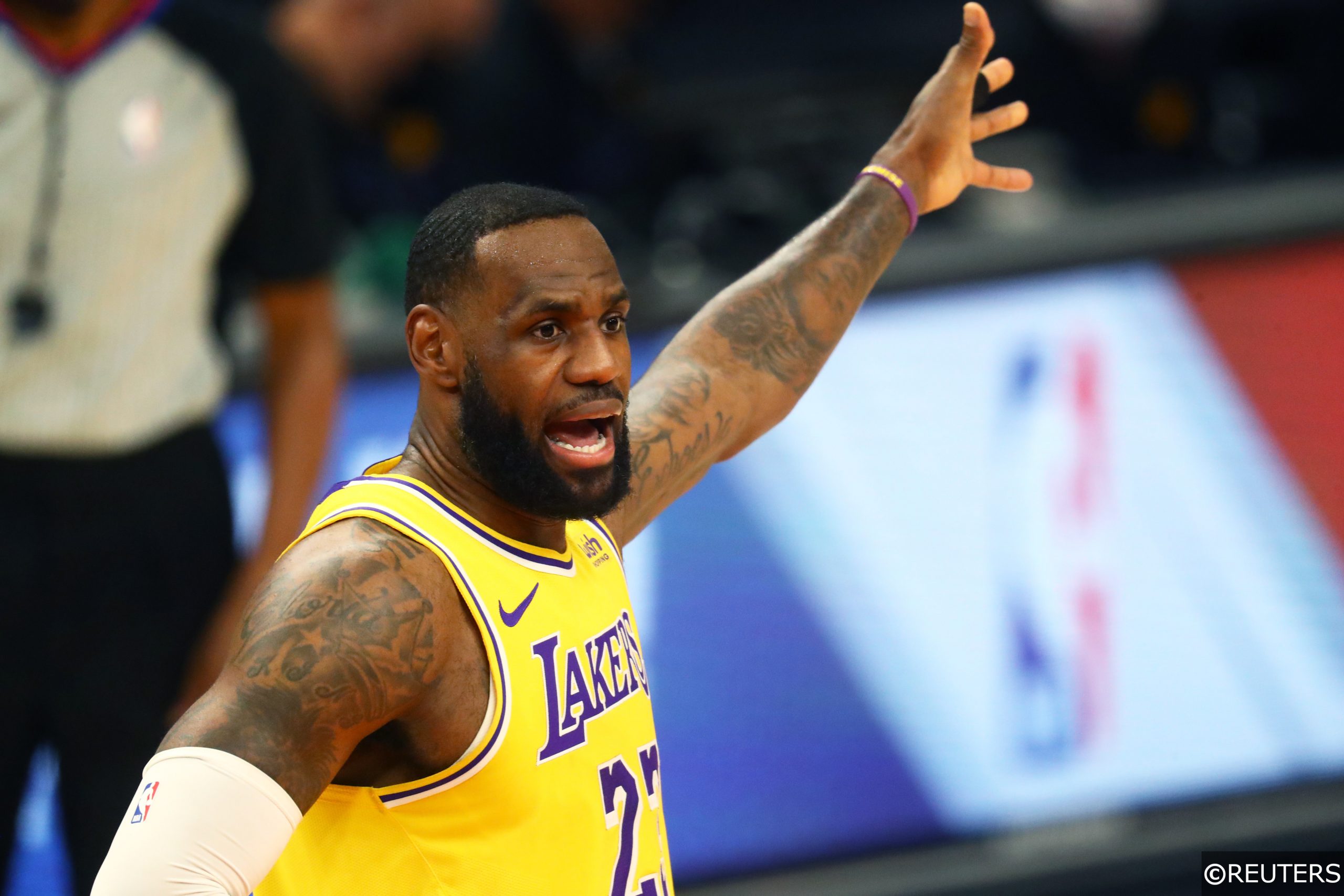 This season the odds don’t really lie. The LA pair in the West are the strongest two teams in the NBA, while the Lakers are clearly ahead of the pack. If they get to the NBA Finals – as we’ve backed them to do – they should be too strong for any side in the East.

A matchup between old rivals the Lakers and Celtics in the Finals would be great, but it’d be a mismatch. It’s tough to see any side from the East stepping up against the Lakers. The defending champions have retained the best double-act in the league in LeBron and Davis, while upping the level of the role players alongside them.

All things considered, there’s little to put us off the Lakers and no other side in the league has the cohesion right now to challenge them. Frank Vogel restored the Lakers to the summit last season and he can keep them there in 2021. 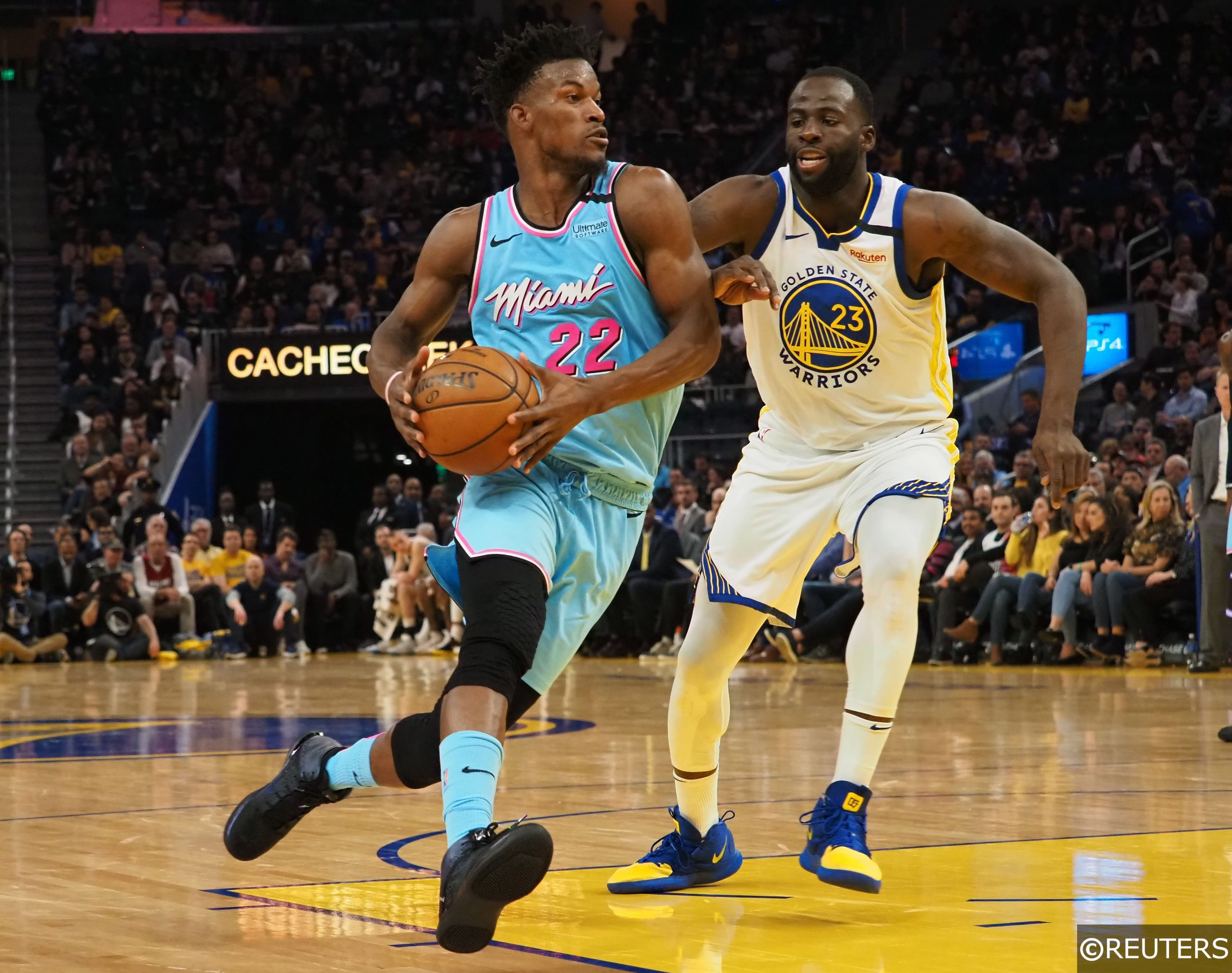 While their importance is dwindling, the NBA still divides the 30 teams into six five-team divisions. Following on from our outright tips, we’ve picked out our winner from each division, which totals up to a 23/1 accumulator tip.

The Lakers and the Celtics are in after we backed them for strong seasons, while Milwaukee Bucks are streets ahead of their nearest Central Division challengers the Indiana Pacers.

In the Northwest the Denver Nuggets look good for glory. After making the Western Conference Finals they should be good for a top-three finish this season.

A busy offseason for the Atlanta Hawks has still left them well short of Southeast favourites Miami Heat. Finally, the Mavericks look too strong for the Houston Rockets and wantaway star James Harden in the Southwest.

Backing the Celtics, Bucks, Lakers, Heat, Mavericks and Nuggets for divisional success clocks in at 23/1.

There’s no shortage of stellar talents leading the NBA’s top teams, but there’s no standout MVP contender. Giannis could have his best season yet, but after going back-to-back with this award he’s unlikely to win it again.

LeBron James is expected to sit for a large part of the season, but play enough to prevent teammate Anthony Davis getting the plaudits. We expect load management to rule out a few of the leading contenders, opening this award up.

That has pushed Luka Doncic out as favourite. While he’s brilliant to watch, Doncic plays in a team who aren’t quite at the top level. He’ll also face a tougher test posting big numbers in the stronger Conference.

That has us looking to the East again, especially with an opening for the Celtics. If they live up to our expectations, then 22/1 Jayson Tatum is in the running for this award. He was great last term, made his mark in the bubble and should put in some big displays across the season. He’s on his way to the elite level of NBA talents and this could be his year to put that beyond doubt.

Rookie of the Year prediction

Given the lack of hype around 2020’s draft class, finding the standout rookie is a tall order. It’s quite a competitive field, one which is currently led by number 3 pick LaMelo Ball. He narrowly edged ahead in the consensus top-three alongside James Wiseman and Anthony Edwards.

However, the weaknesses at the top of the draft could open things up for an outside contender. We could be in a position were none of Edwards, Wiseman or Ball get consistent minutes for their sides. Enter Obi Toppin.

The New York Knicks have drafted hometown boy Toppin and that’s a story which will get him noticed. He’s widely expected to play early on, especially as the Knicks have limited options. If we see a New Yorker thrill for the Knicks at the Garden the Rookie of the Year momentum will grow and grow, even if the Knicks are still terrible. At 13/2 Toppin is the best value in the field.

Coronavirus in sport: what events have been hit by Covid-19?
NBA