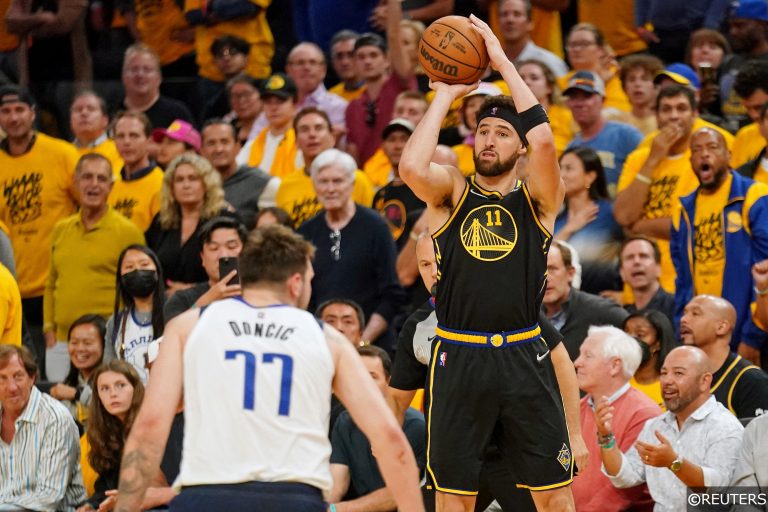 The Boston Celtics edged out the Miami Heat in Game 7 of the Eastern Conference Finals on Sunday night, booking their first NBA Finals appearance in 12 years. After three Conference Finals defeats in five years, Boston finally return to the biggest stage of all.

The Celtics have an impressive run behind them, having swept pre-season favourite Brooklyn in the first round, before back-to-back Game 7 wins over the defending champion Milwaukee Bucks and top-seeded Heat. However, the bookies are against them going into the finals, as the Warriors chase a fourth title since 2015.

Ahead of Game 1 of the Finals on Thursday night, I’ve looked at the biggest markets and selected 13/10, 17/4 and 14/1 outright tips for the series.

The road back to the top has been a tough one for the Warriors, who missed the chance for a three-peat in 2019 when they lost to the Toronto Raptors. That was Golden State’s fifth consecutive Finals appearance, but the year after they were so bad that they weren’t even invited back to finish the season in the Orlando bubble.

Getting Steph Curry and Klay Thompson back from injury has improved their fortunes. Curry’s return last year lifted them into the playoffs, while this season the healthy Warriors finished third in West, beating the Denver Nuggets, Memphis Grizzlies and Dallas Mavericks. That run has seen them shut down back-to-back MVP Nikola Jokic, up-and-coming star Ja Morant and the mercurial Luka Doncic to make it this far.

The Warriors can clearly shut down stars, while they have plenty of talent of their own. Curry and Thompson are huge threats – especially from three-point range – while Jordan Poole has emerged as their heir and his presence off the bench means Golden State will consistently trouble the Celtics from deep.

While the Celtics have been praised for their defensive structure, they were outshot by the Heat consistently in the Conference Finals. Miami had some shocking nights in that series, but the Celtics never pulled away. At their worst, Boston were sloppy in possession, inefficient from the field and unable to get good looks for their main guys at crucial points.

The Heat were unable to fully capitalise on Boston’s errors, but the Warriors will. On their way to winning the West the Warriors dropped just four games across three series, despite predictions they’d struggle early-on.

The Warriors are worthy favourites given their experience and talent, but they’re odds-on to take the series. However, only two of the last 12 seasons have seen the Finals go the distance to seven games, so it makes sense to think this one won’t either. Given how comfortably the Warriors have won their series – along with the fact the Celtics have dropped three of the first six games in each of their last two – it’s worth taking the extra value on the Warriors to win by a two-game margin or greater.

The Warriors are at home in Game 1, 2, 5 and 7 in this series and that should make all the difference. They won all three home games in each of their three series so far, picking up a road win in each too. The Celtics haven’t exactly made TD Garden a fortress in the playoffs, losing twice at home to both Milwaukee and Miami.

The Warriors have been able to rest for a week ahead of Game 1, while Boston have played twice in the meantime, including Sunday’s trip to Miami. They’re straight out on the road again to California after two straight seven game series, with injuries and tiredness a problem for them throughout the Conference Finals.

Given all that, I think the Warriors can wrap up this one up in five games. I expect Golden State to pick up both home games, win once on the road and wrap it up in front of their home support in Game 5. You can back a 4-1 Warriors win at a shade above 4/1 with bet365.

The Finals MVP tends to be won by the biggest star on the winning team, but there’s little value in taking Curry at 10/11. Instead, I’m looking at his Splash Brother, who has returned from back-to-back season ending injuries to get back to the top of the sport.

While Thompson hasn’t fully returned to his pre-injury heights, he did top score with 32 points to clinch a series win over the Mavs in their last game. With Boston likely to focus on shutting down Curry, Klay will need more nights like that to help his team over the line.

Thompson does have a story behind him which will appeal to the voters for this award and he’s got the scoring threat to decide games against Boston. At a huge 14/1 I see a lot of value in Thompson completing a fairytale return to action with a Finals MVP win.